If you need any further evidence that the Republican Party is now a personality cult in thrall to a dangerous demagogue, Donald Trump, today’s House vote to formalize the rules for the next public phase of the impeachment inquiry should erase any remaining doubt.

During the Watergate scandal the House did not approve the rules for the public phase of the impeachment inquiry until February 6, 1974. Republicans were just as partisan in their support of Richard Nixon back in the day. But the roll call vote in the House was 410-4.

It is amazing to me that evangelicals who dare to call themselves Christians — they make up Trump’s most loyal personality cult followers — are so willing to worship this dangerous demagogue and madman as their false idol (violating the First and Second Commandments). Their messianic “Dear Leader” reinforces to them that he is the “King of Israel” and “The Chosen One.” There is nothing Christian about this personality cult of Donald Trump. It is heresy. 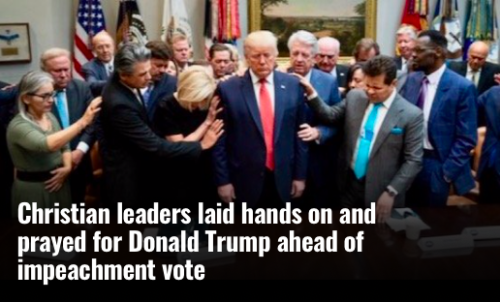 UPDATE: Christian leaders laid hands on and prayed for Donald Trump ahead of impeachment vote:

President Donald Trump’s evangelical Christian supporters laid hands on and prayed for the president this week in the Roosevelt Room of the White House, just days before the House of Representatives voted to pass impeachment inquiry procedures.

The Christian Post reports Dr. Jeffress “told CBN News that the main purpose of the Roosevelt Room gathering was for Trump to inform the religious leaders of ‘the continuing, remarkable accomplishments of this administration — especially in areas that are important to evangelicals.’”

Today’s House vote to formalize the rules for the next public phase of the impeachment inquiry was 232 to 196, largely along party lines. As Steve Benen writes, House advances presidential impeachment process despite zero GOP votes:

Voting in the majority were 231 House Democrats and the chamber’s sole independent (Michigan’s Justin Amash). Voting against the resolution were 194 Republicans and two Democrats (Minnesota’s Collin Peterson and New Jersey’s Jeff Van Drew, both of whom represent “red” districts.)

The full roll call is online here. Note, four members did not vote, and there are currently three vacancies in the chamber.

Republicans voted against the impeachment rules that they have been demanding for weeks, exposing their hypocrisy and utter contempt for the rule of law.

Not a single GOP member broke ranks, which strikes me as arguably the most striking element of this historic occasion. The New Yorker’s Susan Glasser noted this morning that it’s “fascinating that of all these dozens of Republican House members, none of them – not one – makes the calculation that history will judge them harshly for picking Donald Trump.”

But literally every House Republican who voted this morning sided with the White House anyway.

I’ve been thinking lately about something the Washington Post’s Karen Tumulty wrote a few weeks ago, when she considered the possibility that GOP House members would be put in a tough spot in the event of a floor vote like this one. “As evidence of impropriety mounts each day,” Tumulty wrote, “and public support for the inquiry grows, do they really want to cast a vote that says, ‘Nothing to see here’?”

The answer, we now know, is yes. The House Republican minority really did want to cast that vote. They not only oppose impeachment, they oppose the fact-finding process that might eventually lead to impeachment.

Now that this hurdle has been cleared, the House Intelligence Committee will move forward in the near future with public hearings, which will feature questions from staff attorneys (who tend to be quite good at this). In time, the expectation is that the panel, led by Chairman Adam Schiff (D-Calif.), will prepare a report on the impeachment inquiry’s findings, which would be given to the House Judiciary Committee. It would then fall on that panel, under the existing plan, to evaluate the findings and consider drafting articles of impeachment.

As the process moves forward, the weight of history is unmistakable. Before now, only three presidents in American history have ever faced an official impeachment inquiry: Andrew Johnson in 1868, Richard Nixon in 1974, and Bill Clinton in 1998.

Now Donald Trump has joined that exclusive club, and deservedly so.

But what “Dear Leader” has that Richard Nixon did not is a massive propaganda machine to spread disinformation and lies to create an alternative reality to the actual facts which have emerged in this impeachment inquiry. Epistemic closure and the ‘conservative misinformation feedback loop’ media bubble. Trump’s propaganda machine will use the big lie propaganda technique perfected by the Nazis, and the Russian dezinformatsiya of the old Soviet KGB, perfected under the The Gerasimov Doctrine deployed so effectively against America in 2016 by the Trump campaign in concert with Russian intelligence agencies.

We have already seen this deployed in social media by the Trump campaign and his propaganda machine.

This alternate reality disinformation campaign does not pass the smell test (except with Republican sycophants in the personality cult of Donald Trump).

Impeachment Does Not ‘Overturn’ An Election.

Impeachment Is Not A Coup.

As Lawfare Blog explains, the procedural rules for impeachment adopted by the House today “mirror similar procedures from the Nixon and Clinton impeachments,” What’s in the House Resolution on Impeachment?, with one caveat to address the “total obstruction of Congress” policy of the Trump administration (itself an impeachable offense under the Nixon Articles of Impeachment):

The most notable new provision relating to the president is Section F of the Judiciary Committee procedures document, which provides:

Should the President unlawfully refuse to make witnesses available for testimony to, or to produce documents requested by, the investigative committees listed in the first section of H.Res.660 in furtherance of the investigations described in the first section of H.Res.660, the chair shall have the discretion to impose appropriate remedies, including by denying specific requests by the President or his counsel under these procedures to call or question witnesses.

Clearly this paragraph is aimed at addressing recalcitrance the White House has shown thus far regarding these proceedings. The drafters are seeking to use the procedural protections afforded to the president under the resolution as leverage to gain the administration’s cooperation with the inquiry. Whether it is successful in securing such cooperation is a different question, of course, which may be why the text leaves unclear what might be included in the phrase “appropriate remedies.” This phrase could, in theory, include the exercise of Congress’s inherent contempt power to detain or fine witnesses who fail to appear or produce documents pursuant to subpoena. The use of the word “unlawfully” is also curious, as it leaves unspecified who, exactly, would decide what is an “unlawful” refusal to make witnesses available.

The procedural process has largely followed the Nixon and Clinton impeachment inquiries, and has provided the same due process and fairness afforded in those proceedings. Fact-checking Republican complaints about the impeachment inquiry.

It is all about disruption and distraction and theater, not the rule of law. Republicans fancy themselves Arthur (Al Pacino) in “…And Justice for All“:

It is they who are “out of order.” They have sworn fealty to a dangerous demagogue and madman. They are violating their oaths of office to defend the Constitution, and the rule of law. As Trump’s enablers aiding and abetting his criminality, they are equally culpable at law. None of them are fit to serve as a school hall monitor, let alone as a member of Congress. “History will judge them harshly.”

Danielle Allen writes, The biggest impeachment challenge? Commitment. We could all stand to renew and revitalize our core commitments to constitutional democracy.

Michael Gerson writes, The GOP’s defense of Trump has me sinking into cynicism.

Trump defense team: of, by and for Fox News propaganda (Updated)