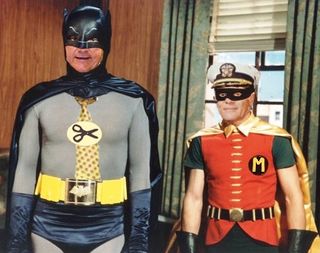 Though Cutman, the Masked Man from Mesa, and Melvin, his Sidekick from Saddlebrooke (AKA Russell Pearce and Al Melvin), haven't wavered in their neverending battles to cut taxes and chase immigrants, lately, their individual efforts have become part of a larger struggle by a band of valiant Republicans to right the wrongs committed by tax-and-spend, empathetic evil doers.

But they both took valiant and courageous stands during yesterday's special session fight to create a bold new tax credit to replace the vouchers which were squashed by those forces of anti-American villainy, the members of the Arizona Supreme Court.

When Democrats argued that a $5 million corporate tax credit would take money away from public schools, Melvin rose to the challenge.

"Any time one penny is diverted from the union effort, they fight it tooth and nail," said Sen. Al Melvin, R-Tucson, citing Arizona Education Association opposition to the proposal.

You're so right, Melvin. It's all about the unions and the parents who have fallen victim to the union's evil Public Education Mind Ray.

Cutman was not to be outdone by his sidekick.

Sen. Russell Pearce, a Mesa Republic, said Democrats say they stand up for children, "but they turn their backs when they really need them."

I wish I had a picture of those demonic Democrats, who try to confuse us with their talk about stopping draconian cuts to children's health care and DES, reeling from the accusation that they refuse to dedicate $5 million to help 400 children.

Where will the Democrats, the Unions and the crazed mob of Zombie Parents strike next? Wherever it may be, we can be sure Cutman and Melvin will be there to answer the challenge.