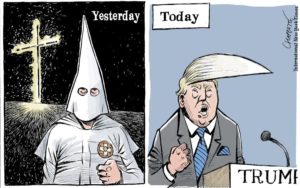 Cartoon courtesy of Patrick Chappatte of the New York Times

This is what happens to the country when there is a President who was endorsed by the KKK. 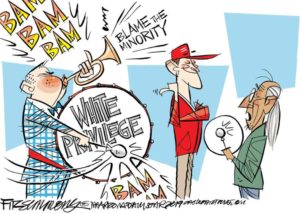 The vile, xenophobic, nativist, white nationalist, and racist elements in our country feel emboldened with the KKK endorsed candidate in the White House.

They feel it is okay to come out of the gutter, make racially charged comments, stage hate-filled rallies, call for KKK rallies and stand behind the popular vote loser at rallies.

This is horrific and UnAmerican. These people, including the current occupant in the White House, do not represent the values that made this country the envy of the world. It also serves as another reason why people can not be complacent as the election of 2020 approaches. The sooner we get a President in 2021 or even if Pence replaces Trump earlier, the better our country will be as we put these insults to humanity back in the holes they belong in. 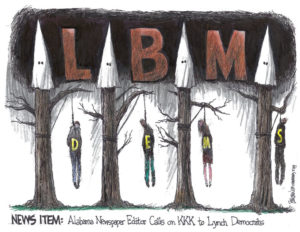