Thugs, some of them from the “Patriot Movement,” Q’Anon, and Three Percenters, created a stir last night at the Maricopa County Recorder Center, yelling “Fox Sucks,” for calling Arizona for Biden, calling for the people to count ballots that were written in Sharpie (Newsflash: They were and are,) and espousing right-wing conspiracy theories when a Pizza Delivery arrived.

Some of these individuals were armed.

People, many of them volunteers, charged with counting the people’s ballots, should not have to worry about their safety and possibly need security to escort them to their vehicles.

What do the voters in those areas see in those two insults to public service?

While these thuggish idiots were engaged in protesting a voting controversy that did not exist, their kindred spirits in other parts of the country like Michigan were attempting to brawl their way into voting centers to stop vote counts. 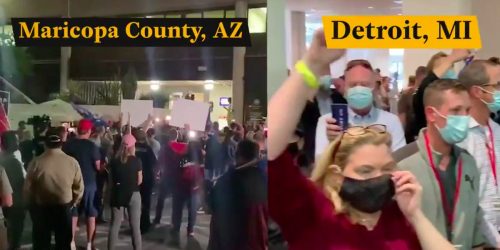 Ignorant thugs like these should be arrested for trying to circumvent the democratic process.

Clearly, these morons had no idea before the Chief Executive Demagogue said out loud, that it sometimes takes days to count votes.

Why these people have not figured out what a calamity Mr. Trump has been for the country is astonishing.

What part of over 230,000 dead people from COVID 19, over 20,000 lies to the American People, a depressed economy, caged children, impeachment, immigrant women made to undergo hysterectomies, the science denial about climate change, and David Duke endorsing Trump twice do they not get?

Hopefully, the majority of the country will get their say this year and the Popular Vote Winner will actually take the Presidency and he will punish these domestic terrorists instead of coddling and encouraging them.