Trump Started an Insurrection; He Needs to Be Removed from Office TODAY

Home/Civil & Human Rights, Courts & Law, National Politics/Trump Started an Insurrection; He Needs to Be Removed from Office TODAY
Previous Next

Trump Started an Insurrection; He Needs to Be Removed from Office TODAY

After the Capitol Police and Military clear the United States Congress of the Pro-Trump domestic terrorists-insurrectionists that stormed and vandalized the building, the Congress led by Vice President Mike Pence and Speaker Nancy Pelosi should continue the joint certification of Joe Biden and Kamala Harris’s Electoral College Victory.

After that, Vice President Pence should invoke the Twenty-Fifth Amendment and start the process to remove Donald Trump from office today.

This is what Trump’s words to these Domestic Terrorists- Trump Zone-Fox Island-Disinfowar Cult followers and black shirts earlier today have brought today at the Capitol.

People trying to break into the House of Representatives: 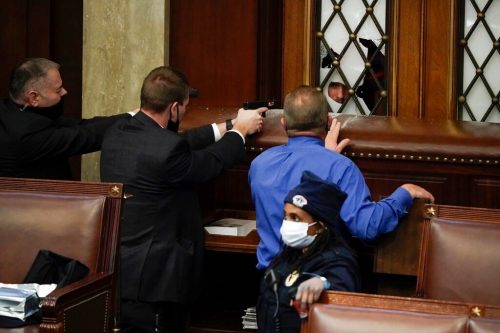 Police with guns drawn watch as protesters try to break into the House Chamber at the U.S. Capitol on Wednesday, Jan. 6, 2021, in Washington. (AP Photo/J. Scott Applewhite)

A masked protestor sitting in the Senate President’s Chair: 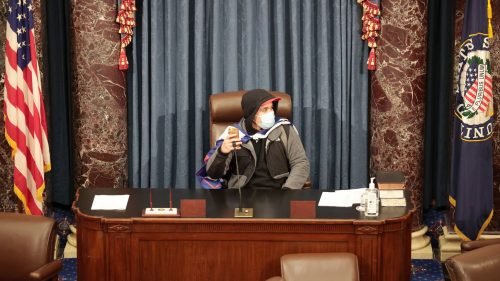 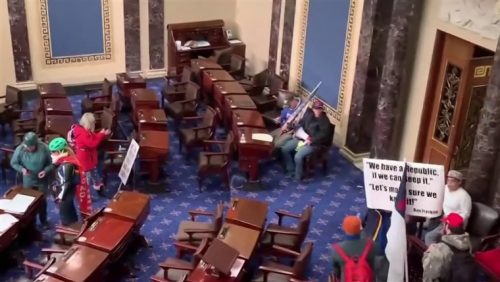 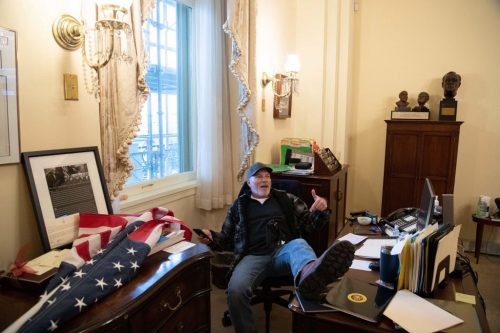 The lives of the Vice President, Vice President-Elect Harris, all the members of Congress (including the Trump enablers,) and all their staffs were threatened.

Donald Trump, with his words earlier in the day, incited this insurrection and assault on Democracy.

His tweets when all hell was breaking loose were timid.

His Twitter Video telling people to go home, released just after Joe Biden’s Presidential Address to the People condemning this attempted coup, may hurt more than help diffuse the situation because it is bookended with his lies about the election and other people.

He should not be allowed to control any levers of power in the remaining 14 days of his term.

Mike Pence and the Cabinet need to invoke the Twenty-Fifth Amendment Today so no more innocent people are endangered.

Donald Trump needs to be removed from the Presidency.

American Democracy and the Republic may not be able to endure him staying in power for 14 more days.