Donna Gratehouse has done an admirable job of pointing out the fraud behind the
Top Two Primary ballot measure.  I have posted several posts over the past year or so on the political science research which demonstrates that the Top Two Primary (jungle primary) fails to deliver what its proponents promise: higher voter turnout and more moderate (centrist) candidates.

Only certain media villagers and pundits in Arizona — (cough!) The Republic! — love this damn fool idea because they are dumber than dirt when it comes to political science.

Most municipal elections in Arizona are already universal balloting by mail. Moreover, between 70 and 80 percent of Arizona voters vote early by mail in state elections.  We are in practice  almost there, it just takes a change in the law to make it official. It would be a minor imposition on those who prefer the ritual of voting on election day — something they can still do under this system, so that is not a legitimate objection — and it would save the counties a substantial sum of money in not having to contract for precinct polling locations and to pay for poll workers.

Martin Longeman at the Political Animal blog writes, Obama Should Look at Universal Voting By Mail:

President Barack Obama made a lot of points during his hourlong State of the Union speech, but he said that “maybe the most important thing I want to say tonight” is that we need to “fix our politics.”. . . But what really animated him was the problem closest to home. Right there in the audience were members of the House of Representatives and Senate who were elected in a system where it’s more accurate to say that they pick their voters than it is to say that the voters pick them. [T]he president reminded them that “We have to reduce the influence of money in our politics, so that a handful of families or hidden interests can’t bankroll our elections.” And then he announced, “This is America: We want to make it easier for people to participate. And over the course of this year, I intend to travel the country to push for reforms that do just that.”

The Washington Monthly just published a cover story by former Oregon Secretary of State Phil Keisling on the promise of Universal Voting By Mail (UVBM) the day before, we were of course intrigued to learn that the president plans to barnstorm the country talking about ways to make it easier for people to vote.

To understand how UVMB can boost voter participation, take a look at the following chart. Note that Colorado, Oregon, and Washington are the states (in light green) that use Universal Voting By Mail.

Figure 1. States with Universal Vote by Mail Had Higher Turnout Among Active Registered Voters in 2014 than Battleground States Without UVBM 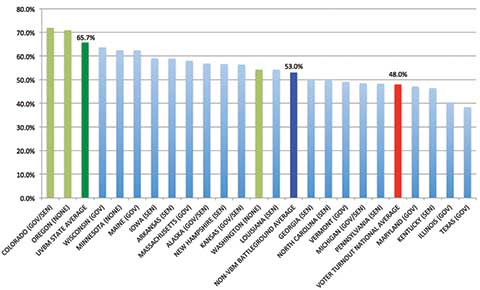 Keisling explains the numbers this way:

In 2014, Oregon’s active voter turnout rate was 70.9 percent—23 percentage points higher than the national average—despite having no hotly contested top races. Colorado, which had both a close Senate and governor’s race, logged a 71.9 percent ARV rate in its debut UVBM election. Washington State had no U.S. Senate or governor’s race in 2014, but its 54 percent ARV turnout still handily beat the national average. (In 2010, thirty-eight of Washington’s thirty-nine counties used all mail ballots, and its 71.2 percent rate that year was second only to Oregon’s.)

Perhaps the most astonishing thing about the way UVBM changes voting behavior is how it boosts participation in low-interest elections like the 2014 contests in Oregon and Washington, or in primaries and municipal elections where nothing sexy is on the ballot.

Democrats and their progressive allies aren’t bereft of ideas to boost voter participation. Hillary Clinton and Bernie Sanders are both championing promising reforms, such as automatically registering all American citizens based on driver’s licenses or birth records. But no other solution holds anywhere near the potential to boost actual voter turnout. Evidence from Oregon, Colorado, and Washington suggests that if other states adopted universal vote by mail (UVBM), they could increase their registered voter turnout in midterm elections by 10 to 15 percent. Even more dramatically, they could double or triple their primary election turnout, which would almost certainly reduce the inordinate influence of take-no-prisoners ideologues.

Young voters are notorious for not turning out in large numbers, but their participation really plummets in non-presidential elections. Yet, this problem is hugely mitigated in UVBM states.

Our first-of-its-kind research is ongoing, but our bottom line finding is this: in states with UVBM, turnout among younger voters (those from eighteen to thirty-four) is dramatically higher—double or more the rate in non-UVBM states. For instance, Figure 3 (page 34) shows the percentage of registered eighteen- to thirty-four-year-olds who voted in 2014 by state. Compare Oregon’s 45.6 percent turnout for this cohort—again, in a relatively dull election year—with rates in battleground states like North Carolina (22 percent), Kentucky (26 percent), Pennsylvania (19.7 percent), and Iowa (27.9 percent).

And consider this: voter turnout of eighteen- to thirty-four-year-olds in the battleground state of Ohio for the 2012 presidential contest was just 3 percentage points higher than Oregon’s midterm rate for that cohort. 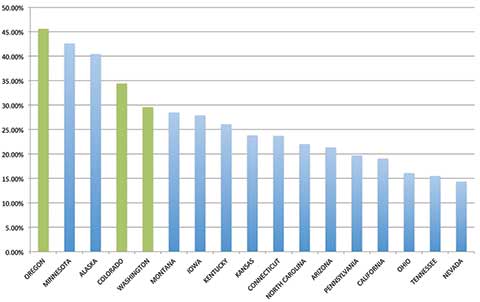 It would be disingenuous if I didn’t acknowledge that higher turnout elections, and especially higher turnout elections among the 18-to-34 contingent, would presently benefit the Democratic Party. I expect that Republicans will oppose the expansion of UVBM into new states for this reason. But I want to make three points anyway.

First, young voters preferred Ronald Reagan and there’s nothing immutable about the Democrats’ current advantage with people younger than thirty-five. If the Republicans are self-confident, they should embrace the challenge of winning the allegiance of young voters again.

Second, the Republicans might not like higher turnout in general elections, but they’d probably like it in primaries. Higher turnout in primaries would reduce the influence of the mouth-breathers who expect them to default on the nation’s credit and shut down the government as part of their annual budget negotiations.

Third, the president should definitely put our cover story on his reading list. If he’s looking for reforms that will increase voter participation and at the same time reduce the influence of big money and the most unreasonable partisans, UVBM is the best option.

It’s also a money-saver and (perhaps counterintuitively) reduces the risk of fraud:

So, we here at the Washington Monthly are encouraged that President Obama is going to embark on this mission, and we’re hoping he comes armed with our ideas.

This also applies to legislative Democrats and voting rights advocacy organizations in Arizona who need to stop talking about universal (automatic) voter registration and universal balloting by mail, and just file the damn initiatives already! What are you waiting for?

Your inaction has created a vacuum in which damn fool ideas like the Top Two Primary seek to fill it with fraudulent promises.

Doesn’t anyone in Arizona know how to play this game?!