Home/AZ Politics, National Politics/Ward and Finchem Disgrace Themselves With Their Reactions to the Trumpist Coup Attempt at the Nation’s Capital
Previous Next

It is time for members of the Arizona Republican Party to decide what people they want to lead them.

In their reactions to the attempted insurrection by Trumpist mobs at the nation’s capital, current Republican Party Chairperson Kelli Ward and Legislative District 11 State Representative Mark Finchem disgraced themselves and clearly showed that they should not be entrusted with any leadership positions.

These examples especially stand out.

This is simply bull fecal matter. What could have prevented this is people like Ms. Ward and Donald Trump not spoonfeeding their unhinged base two months of baseless lies about fraud and a rigged election. Trump and his enablers (like Rudy Giluani who called for trial by combat) that spoke at the rally that sparked the attempted coup that resulted in four deaths should be held accountable.

Another Lie from the Trump Zone and Fox Island. Joe Biden and other Democrats repeatedly condemned rioting during the summer while cheering on the great majority of peaceful protestors

The last tweet example is especially interesting considering Ms. Ward wants to run for reelection to remain the Chairperson of the Republican Party.

“On December 14th, Arizona’s eleven electoral votes were cast, pursuant to the will of the people, the laws of Arizona and the United States Constitution, for President-elect Joe Biden and Vice-President-elect Kamala Harris. Arizona’s Electoral College vote happened after Republican Governor Doug Ducey declared the November 3 election was conducted with integrity, transparency and in accordance with Arizona laws.

Sadly, following the November presidential election, leaders in positions of power, including the President, have peddled lies and conspiracies in an effort to further their own political ambition. These unsupported allegations, that even Trump-appointed judges have rejected, continue to enable a president who cannot accept defeat in a fair fight; the popular vote of an overwhelming majority of Americans or the Electoral College’s margin of victory, not dissimilar to his own 2016 victory. Now our president is fueling the protests, vandalism and violence on our Capitol. We are watching the events unfold and the scenes are despicable and shameful. It is terrifying to watch this seditious assault on our democratic republic. We pray for the safety of all and are grateful for the bravery of the Capitol Police and the law enforcement agencies that have come to their aid.

A dangerous precedent has been set by people more interested in appeasing Trumpism than living up to their oath of office. When leaders ignore the will of the people and make decisions based upon political ambition and blind faith in an ideology, government fails and terror and chaos results. To the Arizona Republican U.S. Representatives who objected to the Arizona Electoral vote, casting doubt on the integrity of the 2020 vote count, I ask you – How can you challenge the integrity of the vote without also placing your own election in question?

Despite these chaotic and unprecedented times, we deeply believe in America, our Constitution, and our Republic. We are so proud of our Arizona Democratic leaders who spoke with such eloquence and passion today in defense of Arizona’s election system and their duty to serve all constituents, choosing the Republic over personal preferences, defending truth, and living up to this nation’s promise.

As even Senate Majority Leader Mitch McConnell acknowledged today, Congress cannot declare itself the “national board of elections on steroids” and overruling the will of the people “will damage our republic forever” – Joe Biden is the next President of the United States.”

One Party Chairperson (Ward) is a rabble-rouser. The other (Rotellini) is a statesman.

Hopefully, the people in the Republican Party will not reelect this disgrace and disgrace to public service.

While they are at it, the people of Legislative District 11 can recall Mark Finchem. His tweets are more unhinged than Wards. He apparently was at the nations capitol when the Domestic Terrorist attack occurred. 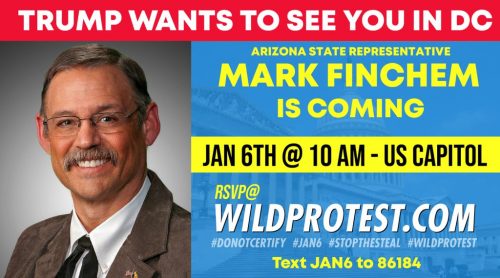 Please view some examples below.

What happens when the People feel they have been ignored, and Congress refuses to acknowledge rampant fraud. #stopthesteal pic.twitter.com/0ZXwyOsS7y

Mr. Finchem: Believing baseless charges of political fraud spread by people like you is no excuse for committing acts of domestic terrorism.

How a republic dies… pic.twitter.com/0lpZuzcwJS

Really. Following the Constitution and affirming the 2020 election results is how a Republic dies.

DCPD refuses GrubHub access to hotels in DC to deliver food to people staying in hotels where restaurants were shut down by commie Mayor of DC. #absurd why do you vote Democrats into office DC? BTW, nobody on the streets except the homeless. pic.twitter.com/bpdUt3xBP2

“What happened today at our nation’s Capitol was an act of domestic terrorism. We and the rest of the world watched this attack on America’s democracy, incited by an American President and carried out by citizens who have pledged allegiance to a man rather than to upholding our Constitution. This attack on our democracy was not a result of “people feeling like they have not been heard.” Today was a deliberate result of lies, misinformation, and conspiracy theories. Today was a call to action by Trump and was answered by his enablers, including Mark Finchem. It’s no secret that Mark Finchem is a member of the Oath Keepers, one of the largest radical anti-government militia groups in the United States. It is imperative that every elected official, Mark Finchem included, condemn the actions we witnessed today and encourage a peaceful transfer of power. Any action to overthrow our government is treasonous. Those committing and/or enabling these acts must be treated as domestic terrorists.”

Doug Ducey is probably a Democrat in Mr. Finchem’s mind.

By the way, Ducey at least struck the right note on yesterday’s attack, writing on social media:

“In America, we practice peaceful transitions of power. We respect the law and law enforcement. The scene at the United States Capitol right now is wrong and has no place in our form of government. All should denounce, and it should end now.”

Ward and Finchem, by spreading disinformation about the election results, are accomplices to the seditious behavior of their supporters and kindred spirits that attacked the center of American Democracy yesterday.

They should resign from public service forever.

If Finchem took an active part in the attack, he should be investigated and possibly arrested.

Recognizing that is not going to happen, it is time for mainstream Republicans to clean their political house of the vermin Ward, Finchem, and others like them represent.

People that excuse acts of domestic terrorism and insurrection against the Republic should not occupy positions of public responsibility. They should be shunned back into the wilderness where they belong.