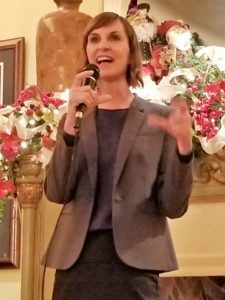 Superintendent of Public Instruction Kathy Hoffman said work needs to be done to “find sustainable and dedicated revenue streams to fund our schools.”

Education funding after last years Red for Ed Movement will continue to dominate discussions in Arizona Political and Economic Circles this year and next.

While the 20 percent raises for instructors and staff over two years and other increases in education funding  (like extending Proposition 301) passed by the legislature are certainly helpful, it still does not fully address the funding shortfall of public schools in Arizona in 2019. For that matter, it does not rectify the funding shortfall at 2008 levels.

What is to be done to bring public school funding up to 2019 levels?

Governors Ducey’s 2019 budget, according to Superintendent of Public Instruction Kathy Hoffman is a step in the right direction but work must be done to “find sustainable and dedicated revenue streams to fund our schools.”

Democratic Legislators also approve of the funding increases for education in the Governor’s budget but most feel that funds designated for the state “rainy day fund” should be used to further fund our schools and other investment needs. They also echo Superintendent Hoffman’s contention that there needs to be defined revenue stream to fund our schools.

With the Invest in Ed movement currently on hold, a tax increase proposal has emerged from the Arizona State Senate. Surprisingly it comes from the Republican side of the legislature. Republican Senate Education Chairperson Sylvia Allen has proposed a .01 percent (a penny) increase in the education sales tax rate. This would provide a dedicated funding stream has generated interest.

Democratic Reaction to the Allen Plan

The reaction among Democrats has been mixed ranging from welcoming the proposal as a starting point to future funding discussions to it does not bring in enough revenue to it is regressive in that it impacts middle and lower income earners more than wealthy ones.

Superintendent Hoffman, through her communications director, stated “The Superintendent has said that all options are on the table to fund education, but believes Sen. Allen’s proposal to increase the sales tax would disproportionately affect low-income families. But we are happy that the conversation at the Legislature has changed to how we’ll fund education and not if we will.”

Legislative District 18 Representative Mitzi Epstein relayed that ” In short, I commend Sylvia Allen for recognizing that our schools do need more funding. I vehemently disagree that an increase in the sales tax is the way to do it. Arizona’s tax structure is already far too regressive, and Sylvia Allen’s plan would make it worse. Also, the actual new funding that she is proposing is about half of what is needed.”

“Instead, I have a thorough and bipartisan plan to both improve funding for Arizona’s school children and revise our tax structure to be less regressive. The process should yield revenue that is fair, adequate, sustainable and transparent. That’s F. A. S. T. because our students need it fast. As the details are firmed, I’ll publish more information.”

Former legislator David Lujan of the Arizona Center for Economic Progress commented that  “While it is certainly progress that we have a rural, conservative lawmaker introducing a measure to raise revenue for public education, it is not a proposal that we can support because it is woefully inadequate in terms of how much revenue it will raise. The Senator Allen proposal will not even bring us back to 2008 funding levels. We also do not support it because it relies solely on raising the state’s sales tax which is a regressive tax that disproportionately impacts low and middle-income Arizonans. A recent report by the Institute on Taxation and Economic Policy found that Arizona has one of the most regressive tax codes in the nation and Arizonans in the lowest 20 percent of income earners pay the sixth highest state taxes in the nation compared to people in the same income group in other states. By comparison, Arizonans in the top one percent of income pay one among the lowest state taxes in the nation. We should be looking at other options for raising revenue that ask corporations and the wealthy to pay their fair share.”

Red for Ed Leader Noah Kervalis repeated many of the sentiments of the others, stating “a sales tax is regressive. We can’t advocate for our students and teachers and then support a tax that would disproportionately impact low-income families.”

Former and possibly future LD 23 State House Candidate Eric Kurland thinks that “We need to have an adult conversation about the future of Arizona. One reason we have so much chatter about a rainy day fund is that our revenue portfolio puts us in the path of hurricanes when other states weather only scattered showers. We are too reliant on sales and personal income tax.”

Finally, the Save Our Schools Arizona group has put out a legislative brief expressing their neutrality on the Allen proposal, not endorsing or condemning it.

There is near universal recognition that our public schools need additional funding. Increasing the state sales tax seems to be the preferred method of Republicans while increasing the income tax for high-income earners is the desired goal for Democrats. Ironically, both strategies on their own do not fully fund education at 2019 levels. Perhaps a compromise can be reached where both sides craft legislation that creates dedicated revenue streams that draw from a penny increase in the sales tax and a modest increase on the wealthy. Or perhaps there is another option like the forthcoming Epstein plan or a future funding proposition that can be considered.

What is important is that most specialists and public servants in the political and economic arenas realize that the funding shortfall in our schools can no longer continue and a solution needs to be arrived at now.