Tom Stiglich, a syndicated cartoonist, published this editorial cartoon in Newspapers across the Southeast and Midwest on June 10, 2020. 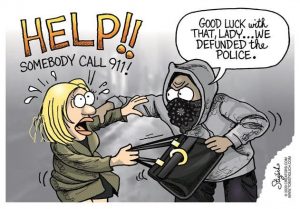 As readers can see, this cartoon is filled with fear stoking and racist dog whistles. The African American male mugger robbing a defenseless white woman. The cries for help are rebuffed by the mugger saying that thanks to them (African Americans,) the police have been defunded.

The reaction to the publication of this cartoon was so swift and negative that the co-owners of one newspaper (the Washington Missourian) in Missouri resigned in protest on June 10.

Another publisher and editor from The Roxboro Courier-Times in North Carolina resigned a few days later after facing condemnation for publishing the cartoon.

The cartoonist, Mr. Stiglich, while at first dumbfounded by the harsh reaction towards the rendering (he stated he was just trying to make a statement against defunding police,) apologized for the offense the cartoon caused and removed it from his website and all the other sites that it had been sent to on June 10, 2020.

With the outrage expressed on June 10, 2020, to the Stiglich cartoon and the resignations that resulted in some media outlets for its publication, voters in Legislative District 11 should be asking Senator Vince Leach why he published this very same cartoon on his social media during the early morning hours (4:25 a.m.) of June 11, 2020.

Voters should also be wondering why this cartoon is still featured, at least on his Facebook Page, as of 5:19 p.m. on June 21, 11 days after the fecal matter hit the fan with this discredited cartoon.

Why would an elected public servant who represents people of all ethnicities peddle such racist garbage for more than a week after the person who drew it has pulled it from his website because it offended so many.

Why would he, someone who is supposed to advocate for all the people, even publish it in the first place?

That is a question the Democratic candidates running to contest Mr. Leach in the fall elections would like to know.

Responding to requests from Blog for Arizona to comment, both of them offered their views of Leach’s continued fascination with the racist fringe.

“By posting these offensive and fear-mongering cartoons, Senator Leach continues to show us his true colors and how divisive he is as an elected official. Rather than calling for meaningful conversation about desperately needed police reforms, he plays dog-whistle politics and perpetuates a culture of fear around the issue. Over the past few weeks, we have seen generations of pain and injustice manifest in protests across the country. For some, the presence of police in their communities provides a sense of safety. For others, police presence brings fear of police brutality. Police officers take an oath to protect and serve. Their badge should be a symbol of public trust that they will serve our communities, not terrorize them. This is not an us versus them issue. Police reform and reallocation of funding to public education, healthcare, and other public service programs are long overdue. The recent protests and demands are a sign of both the ongoing work we must do to become a more just and equitable country and the possibility of truly achieving that change. As for Mr. Leach, he will continue to show us who he really is.”

LD11 State Senator Leach Freely Uses Hate Speech:
It is Time for Him To Go!

“Once again, and twice in the past two weeks, Leach has posted Hate Speech on his Facebook account. Hate Speech anywhere is abhorrent everywhere -and has no place in our society. We all must stand up and hold him to account because silence condones his behavior.”

“Leach’s Facebook postings are an example of everything that is wrong about what is happening in our state and country. Leach is like Trump. His view of the world is ultra-conservative, demeaning, insulting, hate-filled. His posts reflect that he is out of touch with all that is good about the values we hold dear – fairness, justice, and equality are absent from his behaviors and actions. He seeks to divide and conquer. Simply, he does not care about our needs. His postings reflect racism, sexism, and intolerance. He focuses his actions from the Trump Playbook. He does not represent us. Leach needs to go.”

“For over seven years as a legislator, Leach has initiated plans of action that go against the will of his constituents. Public Education Funding, Access to Affordable Healthcare, Fair Tax Rates, Sustainable Water, Protection of the Environment, and Creating Middle-Class Jobs – actions disparately needed by constituents -are absent from his political agenda. And now, he demonstrates unfairness, racism, and discrimination. It is obvious that the Leach Political Agenda is out of touch, tone-deaf, and lacks decency.”

“Imagine a cartoon so disgustingly racist that publishing it forced a city newspaper’s publisher-editor to resign.  That’s exactly what happened on June 16th in Roxboro, NC.  The incident was, in fact, covered on the local ABC affiliate channel 11 because so many people were understandably angered.  The Courier-Times, in announcing the resignation, cut off ties with the syndicated cartoonist responsible.”

“Bad enough for a newspaper to publish an inflammatory cartoon during nationwide racial unrest, but here in Arizona, we have a State Senator doing exactly the same thing.  LD11’s Vince Leach posted the exact same racially insulting cartoon on his FaceBook page on June 11th and it is still there today.”

“If the publisher-editor of a city newspaper lost his job over this, then Vince Leach should lose his.  I doubt that Leach has the integrity displayed in Roxboro, I doubt Leach will resign – but he should.  Blatant racism, especially when coming from an elected official, must never be tolerated.”

“I urge everyone reading this to contact their AZ State Senator and Representatives and demand immediate expulsion of Vince Leach from the State Legislature.  I urge you to contact your local newspaper and demand they investigate and print an article condemning the use of a racially insulting cartoon by an elected State Senator.”

This is not the first time Mr. Leach has published questionable material on his Facebook Page.

The people of LD 11, or anywhere, should expect better from their public servants.

It is past time for Mr. Leach to go.