Back in 2006, then Senator Joe Biden proposed to decentralize power in the new Iraqi government. Decentralize, don’t divide:

President Bush does not have a strategy for victory in Iraq. His strategy is to prevent defeat and to hand the problem off to his successor. Meanwhile, the frustration of Americans is mounting so fast that Congress might end up mandating a rapid withdrawal, even at the risk of trading a dictator for chaos.

Both are bad alternatives.

There is a third way. The idea is to maintain a unified Iraq by decentralizing it and giving Kurds, Shiites and Sunnis their own regions. The central government would be left in charge of common interests, such as border security and the distribution of oil revenue. Everything I’m proposing is already in Iraq’s constitution. 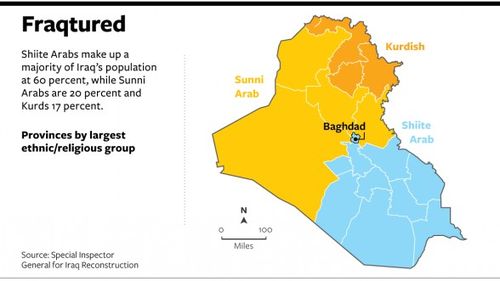 My plan would guarantee the Sunnis a proportionate share of oil revenue. It would tie economic aid to the protection of minorities’ and women’s rights. It would require a regional non-aggression pact. And it would allow us to responsibly withdraw most U.S. forces from Iraq by 2008 — enough time for a settlement to take hold.

What I’m proposing is not partition; in fact, it might be the only way to prevent partition. Violence between the Shiites and Sunnis has surpassed the insurgency as the main security threat. Ethnic militias increasingly are the law in Iraq. They have infiltrated the official security forces. Sectarian cleansing has begun in mixed areas, where tens of thousands of Iraqis have been fleeing their homes in recent weeks.

The only way to hold Iraq together and create conditions for our troops to responsibly withdraw is to give Shiites, Sunnis and Kurds room to breathe in their own regions.

Ten years ago, Bosnia was being torn apart by ethnic cleansing. The United States stepped in decisively with the Dayton Accords to keep the country whole by dividing it into ethnic federations. We even allowed Muslims, Croats and Serbs to retain separate armies. With the help of U.S. troops and others, Bosnians have lived a decade in peace. Now, they are strengthening their central government and disbanding their armies.

My plan would leapfrog Iraq to Dayton — and over a terrible civil war . . . The question I have for those who reject this plan is simple: What is your alternative?

Biden’s plan was derided by the Neoconservatives and their propagandists in the conservative media entertainment complex who defined victory as the permanent U.S. occupation of Iraq in pursuit of their dream of a Pax Americana Empire. Things didn’t work out the way they planned.

In the last few days, a coalition of jihadists, supporters of the Islamic State of Iraq and the Levant (ISIS), an organization loosely connected with Al-Qaeda and Sunni tribesmen, which in the past (for example, during the Surge in 2006/7) were anti-Al-Qaeda, have taken over the city and adjunct oil installations.

Thus bringing to the fore in a dramatic way, the vexed question of Iraq Quo Vadis.

On the face of it, it is not a real question. Is it not that Iraq is almost a model democracy? Is it not that Iraq has fulfilled the wet dream of the Neocons who orchestrated the invasion of 2003, and worked hard since then to convince us that Iraq with its elections and Parliament is the new, post-Saddam free country?

Well, not so quickly. Yes, Iraq is different than what it was under the tyrant; yes the tyrant was horrible, and he HAD to be brought down … but then what?

For years Iraq has experienced a horrific civil war, another version [in that case, the original one] of the Sushi war (Sunnis-Shi’ites), in which hardly a day passed without a car bomb or more — a daily toll of tens. Not much compared to the Syrian killing fields, but FAR too much for a country enjoying the “fruits of democracy.”

There are those who call it sectarianism, others tribalism, and they do it at their peril, because in the world of political correctness, particularly in the academic world, these are dirty words, but truth cannot be washed away by any police. Sectarianism and tribalism is the plague of the Arab Middle East. It is the curse of Syria, Lebanon, Libya, Yemen, Bahrain, possibly (though hopefully not) that of Jordan and Saudi-Arabia.

In a situation like that, the outward signs of democracy, such as elections, mean much less than what they do in a Western society. Bashar Assad in Syria, General Al-Sisi in Egypt and others can hold elections and even be elected by less than the ritualistic 99% and change, but such elections do NOT bring legitimacy (Egypt though may be a somewhat different case, due to its much more demographic profile and its political tradition), something that has to have deeper roots than just having the ritual of elections.

In the case of Iraq (clearly also Syria), an extremely despotic regime tried to achieve stability by the unmitigated use of brute force, and it seemed to be working for nearly three decades, and was brought to an end by foreign intervention. Interesting but not really useful to speculate what could have been if Saddam did not invade Kuwait in 1990 and start the chain of events which led to his downfall. However, neighboring Syria can provide a possible answer, as there, too, the people experienced a nightmare dictatorship and then revolted, without the regime being involved in external adventures.

Be that as it may, the fact is that a blood-thirsty dictatorship can provide stability, but not indefinitely. In the process, it demolishes any social and political association that can provide the oppressed people a framework for organizing themselves in a way conducive to the creation of civic society. What happens, therefore, is that the primordial forms of social loyalty, religion and ethnicity (particularly the first) are the ones which seem natural and legitimate to the people. So, the attack on Assad in Syria is exactly that, sectarian-motivated, and clearly it is what is happening in Iraq, where Arab Sunnis will NEVER accept the legitimacy of a Shi’ite regime, no matter how many elections are taking place.

Here is where the discussions of solutions becomes so relevant. Any such discussion falls within the realm of “easier said than done,” but maybe trying to do what until now has NOT been experienced, can be a key for the future.

If sectarianism/tribalism is the king, why not adopt it rather than fight it? And that brings us back to VP Joe Biden and his much derided idea, that Iraq should be divided along its sectarian/ethnic lines, into Kurdish, Arab Sunni and Arab Shi’ite states, either fully independent or as part of a federal/confederated union. It is no longer like it was decades ago when Baghdad was almost completely Sunni, and there are minorities in the North who will demand their autonomy/self-rule, such as the Syriac-speaking Christians, the Turkomens and Yazidis, and surely there are obvious regional complications — but the idea deserves a renewed discussion and scrutiny.

Clearly, it will be desirable to achieve that before Iraq sinks into a Syrian type full-fledged bloodbath. The chances? Not too high to say the least, but if hundreds of thousands, maybe millions of lives can somehow be spared, as well as the plight of millions of refugees, it is definitely worth a try.

The National Journal earlier this year reached the same conclusion. Turns Out, Joe Biden Was Right About Dividing Iraq, The former senator took a lot of grief for saying the country should be partitioned. He’s going to have the last laugh:

Biden, then a senator, championed a more federal system explicitly allowed by the Iraqi constitution (at the insistence of the Kurds), devolving power from the central government in Baghdad to the provinces. Although Biden denied it at the time, his proposal would almost certainly have led to the de facto soft partition of Iraq into three autonomous regions dominated by Shiites, Sunnis, and Kurds. A similar approach in the 1990s patched together Bosnia out of the detritus of the Balkans civil war between Serbs, Croats, and Muslims. In a 2007 op-ed, Biden warned, “If the United States can’t put this federalism idea on track, we will have no chance for a political settlement in Iraq and, without that, no chance for leaving Iraq without leaving chaos behind.”

He was ahead of his time. “Biden got it dead right, and I still think transitioning to a federal power-sharing arrangement is the only way to stop the killing and hold Iraq together,” says Leslie Gelb, former president of the Council on Foreign Relations, who wrote the op-ed with Biden.

The way to stop the violence may be separation. “Iraq is at a crossroads, and I do think federalism could solve many of the problems we face,” said Osama al-Nujayfi, the Sunni speaker of Iraq’s Council of Representatives, speaking last week at the Brookings Institution. The Kurdish region in the north is already largely autonomous and peaceful, and at least two other provinces (including the strategically important and oil-rich Shiite region around Basra in the south) have begun the constitutional process for gaining regional autonomy. To date, their requests to the electoral commission in Baghdad to hold local referendums on autonomy, he said, have been ignored by the federal government and fiercely opposed by Maliki. “The government has a double standard, supporting some favored groups and oppressing others, and they are demanding their rights under the federal system spelled out in the constitution,” Nujayfi said. “If the government does not respect the constitution and the rule of law, then citizens will find alternatives. That is very dangerous, because some provincial governors are already talking about rebellion.”

“Maliki gets the lion’s share of the blame, because his paranoia and ruthless consolidation of power have terrified the rest of the country,” says Kenneth Pollack, a senior fellow at the Brookings Institution’s Saban Center for Middle East Policy and a former CIA Middle East analyst. “But what’s done is done, and at this point it’s hard to see how you put Humpty Dumpty back together again out of Iraq’s Sunni, Shiite, and Kurdish parts. To make Iraq work probably requires a shift of power from the center to the periphery.”

Which is what Biden was saying all along.

If the British Mandate after World War I had demonstrated the foresight to create nation states in the Middle East that took into consideration ethnicity, tribal affiliation, languages, cultural and sectarian religious differences in creating the borders of new nation states, much of the war and bloodshed since may have been avoided.

It may be too late for the Biden plan to work, but it may be the only option.