America’s original sin, slavery, continues to define our society and political institutions to this day. This is because the U.S. Constitution, which was designed to preserve slavery, now undermines our democracy.

If Americans believe in democracy — and one of our two major political parties, the Party of Trump fka the Republican Party, decidedly does not — we must move to amend the Constitution to remove the lingering vestiges of slavery and usher in a revival of American democracy.

The U.S. Senate was expressly designed to be an anti-democratic institution. The “Connecticut Compromise” which awarded each state two senators under the Constitution regardless of population is also a lingering vestige of slavery. It has always had the anti-democratic effect of giving sparsely populated states greater weight to the power of their senators’ votes than heavily populated states. Wyoming, with a population of 573,720 (2017) has far greater power than California, with a population of 39,776,830 (2017). It is fundamentally anti-democratic, making a tyranny of the minority not only possible but more likely (see below).

Fun fact: Pima County has a population of 1,022,769 as of July 2017, according to the U.S. Census. The population of Pima County alone exceeds the 2017 population in each of these six states: Wyoming, Vermont, Alaska, North Dakota, South Dakota and Delaware (and comes very close to the population of Rhode Island and Montana). This is six states with 12 senators to Pima County’s none — because Arizona’s two senators only represent the “State of Maricopa,” and ignore Arizona’s other 14 counties (oh, you know it’s true).

The Constitution needs to be amended to adopt apportionment by population for an expanded number of U.S. senators, whatever number Congress decides upon, as we do with the House of Representatives if Americans truly believe in democracy. It is fundamental to reviving American democracy. Sparsely populated Red States will oppose it to preserve their unfair advantage.

Until 1913 with the adoption of the 17th Amendment, Americans did not vote for their senators, they were selected by state legislators under the Constitution. There are many in the Party of Trump who want to repeal the 17th Amendment (including Arizona GOP legislators), making the U.S. Senate even more anti-democratic.

Lawrence O’Donnell had an excellent commentary of the anti-democratic nature of the U.S. Constitution in a segment titled The Senate Is An Unfixable Crime Against Democracy (It can be fixed by amending the Constitution). 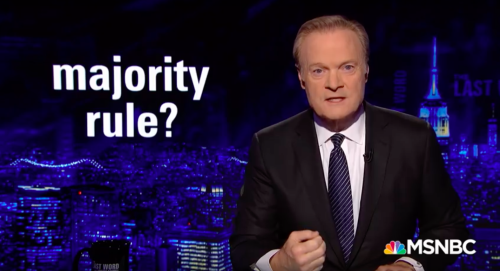 Phillip Bump of the Washington Post explains how we have jut witnessed a tyranny of the minority which will only get worse unless the Constitution is amended. Senators representing less than half the U.S. are about to confirm a nominee opposed by most Americans:

There have been five presidents who assumed the office after having lost the popular vote. Between them, they nominated 12 justices who ended up serving on the Supreme Court. On Saturday, with President Trump’s nomination of Brett M. Kavanaugh poised to pass the Senate, the number will climb to 13.

Kavanaugh, though, has a distinct honor: He will be the first justice nominated by someone who lost the popular vote to earn his seat on the bench with support from senators representing less than half of the country while having his nomination opposed by a majority of the country.

Let’s walk through it.

Obviously, Trump got almost 3 million fewer votes than Hillary Clinton in the 2016 election. Clinton got about 48 percent of the votes cast for president. Trump got about 46 percent.

But that by itself doesn’t tell the whole story. Nearly half of U.S. residents over the age of 18 didn’t vote. Of the entire over-18 population, Trump got only about 25 percent of the possible votes. Clinton got about 26 percent.

Again, Trump is not alone in failing to win the popular vote. President George W. Bush is the other recent president to have that same fate. And, like Trump, Bush was also fairly unpopular when he made his Supreme Court nominations. Trump, according to an NPR-PBS NewsHour-Marist poll released this week, has the approval of only 41 percent of American adults. (That’s about where Bush was in late 2005 when he made his picks.)

But Kavanaugh, Trump’s nominee, is himself not very popular. Only a bit more than a third of the country views him favorably, according to that Marist poll. That’s certainly in part because of the allegations of sexual assault that were leveled against him last month. A majority of women disapprove of him.

What’s more, that same poll found most Americans didn’t want to see him confirmed. More than half, 52 percent, said the Senate should not advance him to the Supreme Court.

Bush’s second pick, Samuel A. Alito Jr., had majority support from the public going into his confirmation vote. (And, by that time, Bush had won an election by prevailing in the popular vote.) But Alito does share that third distinction with Kavanaugh: Both relied on votes from senators representing less than half the country to get to the Supreme Court. For Alito, the votes he received came from senators representing 49.8 percent of the country (assigning half of a state’s population to each of its senator).

Kavanaugh’s confirmation will come with support from senators representing only 44.2 percent of country.

(For the purposes of our count, we included Sens. Steve Daines (R-Mont.) and Lisa Murkowski (R-Alaska), who aren’t planning to cast votes for or against Kavanaugh.)

He will join three other justices who, like him, were appointed by presidents who lost the popular vote.

The consequences of this tyranny of the minority is tearing apart the country.  Thomas Friedman recently called it The American Civil War, Part II (excerpt):

[N]ot only have we lost the buffers and cushions we once had, but a generation of leaders has come along, led by Donald Trump, who have made fueling our divisions their business model.

In essence, we’ve moved from “partisanship,” which still allowed for political compromises in the end, “to tribalism,” which does not, explained political scientist Norman Ornstein, co-author, with Thomas Mann, of the book “It’s Even Worse Than It Looks: How the American Constitutional System Collided With the New Politics of Extremism.” In a tribal world it’s rule or die, compromise is a sin, enemies must be crushed and power must be held at all costs.

It would be easy to blame both sides equally for this shift, noted Ornstein, but it is just not true. After the end of the Cold War, he said, “tribal politics were introduced by Newt Gingrich when he came to Congress 40 years ago,” and then perfected by Mitch McConnell during the Barack Obama presidency, when McConnell declared his intention to use his G.O.P. Senate caucus to make Obama fail as a strategy for getting Republicans back in power.

Flake, the departing Arizona Republican, called this out this week: “We Republicans have given in to the terrible tribal impulse that first mistakes our opponents for our enemies. And then we become seized with the conviction that we must destroy that enemy.”

The shift in the G.O.P. to tribalism culminated with McConnell denying Obama his constitutional right to appoint a Supreme Court justice with almost a year left in Obama’s term. As NPR reported: “Supreme Court picks have often been controversial. There have been contentious hearings and floor debates and contested votes. But to ignore the nominee entirely, as if no vacancy existed? There was no precedent for such an action since the period around the Civil War.”

In a speech in August 2016, McConnell boasted: “One of my proudest moments was when I looked Barack Obama in the eye and I said, ‘Mr. President, you will not fill the Supreme Court vacancy.’”

That was a turning point. That was cheating. What McConnell did broke something very big. Now Democrats will surely be tempted to do the same when they get the power to do so, and that is how a great system of government, built on constitutional checks and balances, strong institutions and basic norms of decency, unravels.

My friend retired Marine Col. Mark Mykleby stopped by for a chat after the Kavanaugh hearing last week, and as we bemoaned this moment, he remarked: “When I walked out of the Pentagon after 28 years in uniform, I never thought I’d say this, but what is going on politically in America today is a far graver threat than any our nation faced during my career, including the Soviet Union. And it’s because this threat is here and now, right at home, and it’s coming from within us. I guess the irony of being a great nation is the only power who can bring you down is yourself.”

Mykleby’s words echo the words of Abraham Lincoln in his Lyceum Address in 1838:

“At what point shall we expect the approach of danger? By what means shall we fortify against it? — Shall we expect some transatlantic military giant to step the ocean and crush us at a blow? Never! All the armies of Europe, Asia, and Africa combined, with all the treasure of the earth (our own excepted) in their military chest, with a Bonaparte for a commander, could not by force take a drink from the Ohio or make a track on the Blue Ridge in a trial of a thousand years.

At what point then is the approach of danger to be expected? I answer. If it ever reach us it must spring up amongst us; it cannot come from abroad. If destruction be our lot we must ourselves be its author and finisher. As a nation of freemen we must live through all time or die by suicide.”

When I look at all the people today who are propelling their political careers and fattening their wallets by dividing us, I cannot help but wonder: Do these people go home at night to some offshore island where none of this matters? Do these people really think their kids aren’t going to pay for the venom they sell and spread? Don’t worry, I know the answer: They aren’t thinking and they aren’t going to stop it.

What stops it? When a majority of Americans, who are still center-left and center-right, come together and vote only for lawmakers who have the courage to demand a stop to it — now, right now, not just when they’re leaving office or on their death beds.

We are at a crossroads, America. The survival of democracy itself is on the ballot. The only means we have to check this tyranny of the minority is to vote authoritarian Republicans out of office.