A proposal to reform the broken presidential primary system (Updated)

A proposal to reform the broken presidential primary system (Updated)

The state of New Hampshire, and later the state of Iowa, figured out that they could game the system by having “first in the nation” status for presidential primaries and caucuses, and make a ton of money off of all the media advertising and campaign spending in their states to sway just a few hundred thousand voters. These early primaries are an extremely profitable cottage industry to these states, which has unfortunately given these states an undue influence over the selection of the political parties’ nominees since the 1970s. This broken presidential primary system should end.

Iowa’s precinct caucuses drew little notice for decades. Then, in 1972, the state Democratic Party decided to hold them six full weeks before the primary in New Hampshire, which has led the nominating calendar since 1920.

These are two of the whitest states in America. Nationwide, 60% of the populace is white. In New Hampshire, it’s 90%. In Iowa, it’s 85%. They rank fourth and sixth among the states.

Growth in Iowa and New Hampshire is anemic, too. By income, age distribution, education — pick a metric — these aren’t microcosms of America. 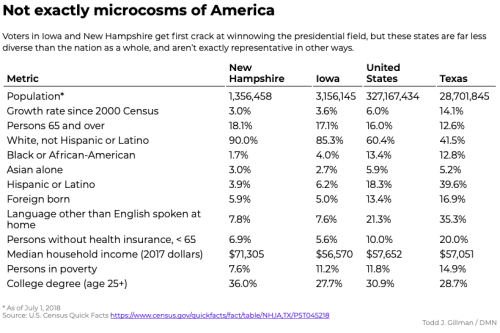 A handful of older, whiter, rural voters — a caucus or primary can be decided by merely a few hundred votes difference — should not be anointing a candidate with “frontrunner” status, a status amplified by lazy political pundits who play this ridiculous game every four years. These early primary states are in no way representative of America writ large.

I am hardly the first person to propose reforming the broken presidential primary system. Ideas have been proposed every four years, and yet, here we are again.

Among the tweaks since 2016: A half-dozen states shifted from caucuses to primaries, which are easier to participate in.

That doesn’t mollify critics of the Iowa-New Hampshire nexus.

“I operate in a system that was not designed for me or for by people who look like me,” said Georgia state Sen. Nikema Williams, chairwoman of the Georgia Democratic Party. She conceded that finding consensus for a better system isn’t easy. “It’s more of a long term vision of how do we make sure that our party is reflective of the people that we represent.”

Resistance is fierce, and it’s easy to see why.

At the parties’ quadrennial conventions, the nominees tend to quash efforts to rewrite rules of a game they just won.

The early states support a cottage industry of political consultants.

And consider Iowa’s remarkably high ratio of ambassadors to farmers: Eight in the last 30 years, with plum assignments such as Malta, Barbados and Latvia, and credentials such as a stint chairing the state GOP. The current ambassador to China is a former governor, Terry Branstad.

A half-dozen ambassadors have come from New Hampshire, where the well-connected have landed postings to Denmark, Belize, New Zealand, Trinidad and Tobago, and Saudi Arabia.

Like I said, this is a cottage industry that gives these two rural states undue influence, in more ways than one. Can anyone honestly say that this has been good for America?

So how can we make the presidential primary system fairer, and hopefully more representative of America writ large?

When you start to pick winners and losers, i.e., picking which states go first in the presidential primary order, that’s when you pit state against state and your reform effort will collapse.

It seems to me the only way to make the presidential primary system fairer is random selection through a lottery system, and hopefully more representative of America writ large by grouping states together in primary blocks.

For example, with fifty states we could divide the states up in blocks of 10 states (like a “Super Tuesday”) for a short primary season, or in blocks of five states, to retain the current overly long primary season, if you prefer. The U.S. territories and Americans overseas would also be selected by lottery. Schedule these blocks of primaries with two weeks of campaigning between each block of primaries.

(Doing this would require some states to decouple their state primaries from their presidential primary, but that’s not a problem in most states.)

Of course, I know the response is going to be “What’s fair got to do with it?” There is a ton of money to be made by the states that go early, and their greed and undue influence is not something they are going to give up willingly out of any civic sense of fairness.

Nothing is going to change until there is a national consensus to change a broken presidential primary system.

I want to use this moment to point out how bizarre the current system is — and to make a plea: The 2020 cycle should be the last time that Iowa and New Hampshire benefit at the country’s expense.

A typical voter in Iowa or New Hampshire has up to 20 times more influence than somebody in later-voting states, one study found.

Race isn’t the only problem, either. Iowa and New Hampshire are not home to a single city of more than 250,000 people. The two states also have a disproportionately large share of retirees and a smaller share of people in their 20s, 30s and 40s.

[I]t’s another form of privilege for groups that already benefit from the Senate and Electoral College — white voters, older voters and voters outside of major metropolitan areas.

This is where Leonhardt falls into the trap of picking winners and losers, which ensures the reform effort will fail.

It would not be hard to create a fairer system, one that aspired to treat all Americans equally. It could even retain the best aspect of Iowa and New Hampshire: the emphasis on in-person politics that a small state demands.

One or two smaller states could always go first, with the specific states rotating each cycle. (Many smaller states — like Delaware, Hawaii, Mississippi, New Mexico and Rhode Island — are diverse.) They could immediately be followed by a couple of larger states that are home to major cities.

Obviously, politicians in Iowa and New Hampshire will fight any such change, as they always have … Strip away the rhetoric, though, and their argument comes down to this: We’re better than the rest of you, and we deserve special treatment forever.