Federal prosecutors are examining whether foreigners illegally funneled donations to President Trump’s inaugural committee and a pro-Trump super PAC, Rebuilding America Now, in hopes of buying influence over American policy, according to people familiar with the inquiry.

The line of questioning underscores the growing scope of criminal inquiries that pose a threat to Mr. Trump’s presidency.

The inquiry into potential foreign donations to the inaugural fund and the super PAC is yet another front being pursued by multiple teams of prosecutors.

MSNBC put together a graphic for the burgeoning number of  investigations. The Washington Post attempts to summarize all of the current investigations that are known. Mounting legal threats surround Trump as nearly every organization he has led is under investigation:

Two years after Donald Trump won the presidency, nearly every organization he has led in the past decade is under investigation.

Trump’s private company is contending with civil suits digging into its business with foreign governments and with looming state inquiries into its tax practices.

Trump’s 2016 campaign is under scrutiny by special counsel Robert S. Mueller III, whose investigation into Russian interference has already led to guilty pleas by his campaign chairman and four advisers.

Trump’s inaugural committee has been probed by Mueller for illegal foreign donations, a topic that the incoming House Intelligence Committee chairman plans to further investigate next year.

Trump’s charity is locked in an ongoing suit with New York state, which has accused the foundation of “persistently illegal conduct.”

The mounting inquiries are building into a cascade of legal challenges that threaten to dominate Trump’s third year in the White House. In a few weeks, Democrats will take over in the House and pursue their own investigations into all of the above — and more.

Mueller’s investigation began in May 2017 after Trump fired FBI Director James B. Comey. The special counsel’s mandate: to investigate Russian interference in the 2016 campaign and whether the Kremlin worked with Trump associates. Mueller is also examining whether the president has sought to obstruct the Russia probe.

So far, Mueller has charged 33 people. That includes 26 Russian nationals — some of whom allegedly stole emails and other data from U.S. political parties, others of whom allegedly sought to influence public opinion via phony social media postings.

Paul Manafort, Trump’s former campaign chairman, was found guilty in August of tax and bank fraud charges and pleaded guilty in September to conspiracy and obstruction charges unrelated to his work for the campaign. He agreed to cooperate with Mueller’s investigation — though the special counsel’s office recently asserted he has been lying to investigators.

It’s unclear where Mueller’s inquiry is headed — and whether it will end with a spate of indictments reaching further into Trump’s world or with a written report submitted to the Justice Department.

Trump has repeatedly denied there was any “collusion” between his associates and Russia and has attacked the investigation as a fishing expedition led by politically biased prosecutors. Advisers said he has recently ramped up his attacks — hoping to undermine confidence in Mueller’s work — because he believes the probe is at a critical stage.

Separately, federal prosecutors in Manhattan have pursued another investigation that emerged out of the 2016 campaign: hush-money payments Cohen made to two women who said they’d had extramarital affairs with Trump.

Cohen, who was sentenced Wednesday to three years in prison for what a judge called a “veritable smorgasbord of criminal conduct,” pleaded guilty to campaign-finance violations in connection to the payments.

Cohen also named who told him to pay off the women: Trump.

“He was very concerned about how this would affect the election,” Cohen told ABC News in an interview that aired Friday.

Trump has denied he directed Cohen to break the law by buying the silence of former Playboy playmate Karen McDougal and adult-film star Stormy Daniels. He also said Cohen, as his lawyer, bore responsibility for any campaign finance violations.

“I never directed him to do anything wrong,” Trump told Fox News on Thursday. “Whatever he did, he did on his own.”

Prosecutors also revealed Wednesday they had struck a non-prosecution agreement with AMI, the company that produces the National Enquirer tabloid, for its role in the scheme.

The company admitted it had helped pay off one of Trump’s accusers during the campaign. It said it had done so in “cooperation, consultation, and concert with” one or more members of Trump’s campaign, according to court filings.

It is unclear whether prosecutors will pursue charges against campaign or Trump Organization officials as part of the case.

But at the White House, advisers have fretted that this case — and not Mueller’s — could be the biggest threat to Trump’s presidency. House Democrats have already indicated the campaign-finance allegations could be potential fodder for impeachment proceedings.

Scrutiny of the inaugural committee

The nearly $107 million donated to Trump’s inaugural committee has drawn the attention of Mueller, who has probed whether illegal foreign contributions went to help put on the festivities.

The special counsel already referred one such case to federal prosecutors in Washington. In late August, an American political consultant, W. Samuel Patten, admitted steering $50,000 from a Ukrainian politician to the inaugural committee through a straw donor.

Patten pleaded guilty to failing to register as a foreign lobbyist and agreed to cooperate with prosecutors.

On Friday, Rep. Adam B. Schiff (D-Calif.), the incoming chairman of the House Intelligence Committee, said his panel plans to investigate possible “illicit foreign funding or involvement in the inauguration.”

The Wall Street Journal reported this week that federal prosecutors in New York are examining whether the inaugural committee misspent funds. The Washington Post has not independently confirmed that report.

Officials with the committee, which was chaired by Trump’s friend Tom Barrack, said they were in full compliance “with all applicable laws and disclosure obligations” and have not received any records requests from prosecutors.

White House spokesman Hogan Gidley told reporters this week that questions about the committee’s practices have “nothing to do with the president of the United States.”

Trump also faces a pair of civil lawsuits alleging he has violated the Constitution by doing business with foreign and state governments while in office.

Trump still owns his private company, though he says he’s given up day-to-day control to his sons Donald Trump Jr. and Eric Trump. Since the 2016 election, Trump’s businesses have hosted parties for foreign embassies, hosted Malaysia’s prime minister and Maine’s governor, and rented more than 500 rooms to lobbyists paid by the Saudi government.

The lawsuits allege that such transactions violate a Constitutional ban on presidents taking emoluments, or payments, from foreign or state governments. One complaint was filed by congressional Democrats; the other by the Democratic attorneys general of Maryland and the District of Columbia.

“What we want to do is be able to tie the flow of money from foreign and domestic sovereigns into Donald Trump’s pocketbook,” said Karl A. Racine (D), the D.C. attorney general. He called the emoluments clauses “our country’s first corruption law.”

So far, Trump — who is represented by the Justice Department and a private attorney — has failed to get the cases dismissed or block discovery.

Earlier this month, the two attorneys general sent Trump’s company a raft of subpoenas. They expect to get answers early next year.

In New York, where Trump’s business is based, incoming Attorney General Letitia James (D) is preparing to launch several investigations into aspects of his company.

“We will use every area of the law to investigate President Trump and his business transactions and that of his family as well,” James told NBC News.

She said she wanted to look into whether Trump had violated the emoluments clause by doing business with foreign governments in New York and examine allegations detailed by the New York Times that Trump’s company engaged in questionable tax practices for decades.

New York state’s tax agency has also said it is considering an investigation into the company’s tax practices.

Trump is accused of violating several state charity laws, including using his charity’s money to pay off legal settlements for his for-profit businesses. He used the foundation to buy a portrait of himself that was hung up at one of his resorts. Trump also allegedly allowed his presidential campaign to dictate the charity’s giving in 2016 — despite laws that bar charities from participating in campaigns.

The attorney general has asked for Trump to pay at least $2.8 million in penalties and restitution and that he be barred from running a charity in New York for 10 years.

Trump has called the suit politically motivated and “ridiculous.”

Last month, a New York state judge denied a request by Trump’s attorneys to throw out the suit.

A judge has allowed Zervos to seek discovery — including possibly deposing the president — as the two sides wait for a panel of New York appellate judges to rule on Trump’s latest move to block the lawsuit.

Trump has argued that, as a sitting president, he is immune from the claims in both the foundation and Zervos case. He maintains that the 1997 Supreme Court decision in Clinton v. Jones — which said that presidents do not have immunity from civil litigation — does not apply in state courts.

UPDATED: Garrett Graff writing at Wired does the Washington Post one better, outlining A COMPLETE GUIDE TO ALL 17 (KNOWN) TRUMP AND RUSSIA INVESTIGATIONS (not including congressional investigations current and to come). 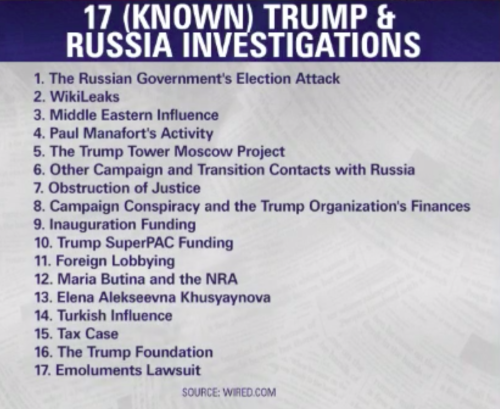 When it is all finally said and done several years from now, hopefully we can look forward to a group photo similar to this one. 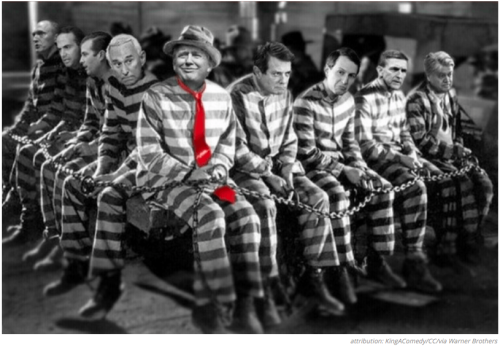