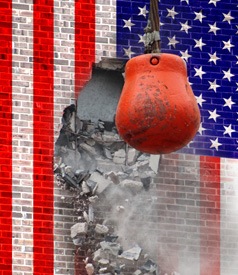 So naturally the Tea-Publicans in the Arizona House were all for it — hell yeah! Arizona House Tea-Publicans approved HCR 2017 (.pdf), an Application for an Article V Convention to propose amendments to the United States Constitution. Then they did it again in a strike everything amendment to Cap’n Al Melvin’s bill, SCR 1016 (.pdf). House Tea-Publicans also approved the ALEC model legislation for the “limitation” provisions supposedly to prevent a runaway convention, HB 2104 (.pdf),  and HB 2397 (.pdf).

Only Tea-Publicans voted in favor of this ALEC model legislation, including the “mythical moderate Republican” Ethan Orr (R-Tucson).

All of these ALEC model bills died in the Arizona Senate where Senate President Andy Biggs, who is no fan of Article V conventions, made certain that these bills never came up for a final vote. I guess we owe him a debt of gratitude for a rare moment of sanity.

For his act of sanity Andy Biggs was attacked by the always insane halfling governor of  Alaska, the Quitta from Wasilla, Sarah Palin, who took to Facebook (naturally) to chastise Senate President Andy Biggs as the “only man standing in the way” of a vote on a measure to call an Article V Convention to propose amendments to the U.S. Constitution.

Who the hell cares what a bad reality TV show actress and social media maven has to say about anything? Her 15 minutes of fame have long since passed. Just go away.

And thank you, Andy Biggs — just this once.