Above: Cheers, whoops and shouts of “God is Great” broke out after Zalmay Khalilzad, left, and Mullah Abdul Ghani Baradar, the Taliban’s political leader, signed the landmark agreement in Doha on Saturday. Hussein Sayed / AP

Hundreds of miles from the battlefields of Afghanistan in a glitzy banquet hall in a five-star hotel in Qatar, the United States and the Taliban signed a landmark agreement that paves the way for U.S. troops to begin withdrawing from the poor and war-torn central Asian country.

“The Taliban will not allow any of its members, other individuals or groups, including Al Qaeda, to use the soil of Afghanistan to threaten the security of the United States and its allies,” the agreement states.

Under the pact, the U.S. would reduce its forces to 8,600 from 13,000 in the next three to four months. Remaining U.S. forces would withdraw in 14 months, although a complete pullout would depend on the Taliban meeting commitments to prevent terrorism.

U.S. special envoy Zalmay Khalilzad and the Taliban’s chief negotiator and one of its founders, Mullah Abdul Ghani Baradar, signed the agreement in Doha after more than a year of on-off formal talks.

Some in the room broke out in whoops, cheers and shouts of “God is Great” at the signing. The several dozen members of the Taliban exited the room after the ceremony beaming.

U.S. Secretary of State Mike Pompeo also attended the ceremony, but did not sign the “Agreement for Bringing Peace to Afghanistan,” under which the Taliban pledged to enter into peace talks with Afghan government officials, representatives of the opposition, and members of civil society on March 10.

Speaking to reporters, Pompeo said the United States was “realistic” about the deal it signed, but was “seizing the best opportunity for peace in a generation.”

He said that while he was still angry about the Sept. 11, 2001 attacks, the U.S. will not “squander” what its soldiers “have won through blood, sweat and tears.”

Meanwhile, Secretary of Defense Mark Esper was in Kabul Saturday to meet with Afghan President Ashraf Ghani and leaders of NATO and the resolute support mission, which trains, advises and assists Afghan national defense and security forces. His aim there was to “further engage with the Afghan peace process,” he wrote in a tweet.

He later spoke to U.S. troops in the country, noting that some of them had not yet been born when the war broke out.

NATO Secretary General Jens Stoltenberg was also in Kabul on Saturday for another signing ceremony with Esper and Ghani.

After 18 years, there are currently between 12,000 to 13,000 U.S. troops in Afghanistan, who advise Afghan forces and carry out counterterrorism operations against Al Qaeda and the Islamic State militant group.

President Donald Trump has repeatedly railed against America’s “endless wars” abroad and Saturday’s deal will give him a talking point in his bid for re-election.

America’s war in Afghanistan has spanned three U.S. administrations. Trump’s predecessor in the White House, Barack Obama, had tried to extricate U.S. troops from the country and even outlined a plan for a final exit. But Obama held off in the end amid concerns about the staying power of the Afghan security forces against a resilient insurgency.

The war has taken a devastating toll. Afghanistan currently tops the list of the world’s deadliest conflicts.

Since 2016, children have accounted for nearly a third of the estimated 11,000 civilian casualties every year in the conflict, according to Human Rights Watch. Since the United Nations began systematically documenting the impact of the war on civilians in 2009, it has recorded more than 100,000 civilian casualties, including more than 35,000 killed and 65,000 injured.

Between 2001 and October 2018, more than 58,000 Afghan security forces were also killed, according to a study by Brown University.

And nearly two decades after the U.S. invaded and billions of American taxpayer dollars later, the Taliban control, influence or contest nearly half of the country, according to the last reported numbers released by the Department of Defense in January 2019.

The Afghan government is perceived to be one of the world’s most corrupt and is currently facing its own political crisis as its rivals refute the results of September’s presidential elections, claiming that the polling was riddled with fraud.

And the status of women in Afghanistan — like so many other parts of Afghan life — is once again up in the air as a return to Taliban rule in the country could potentially jeopardize nearly two decades of progress for Afghan women.

One issue that wasn’t clearly addressed, however, is what the deal could mean for women’s rights. The Taliban, which operates under a strict brand of Sharia law, has historically repressed women in Afghanistan, but there has been gradual, if incomplete, progress in Afghanistan since they were toppled by U.S. forces a few months after the invasion in 2001. So the deal certainly has led to fears of regression. 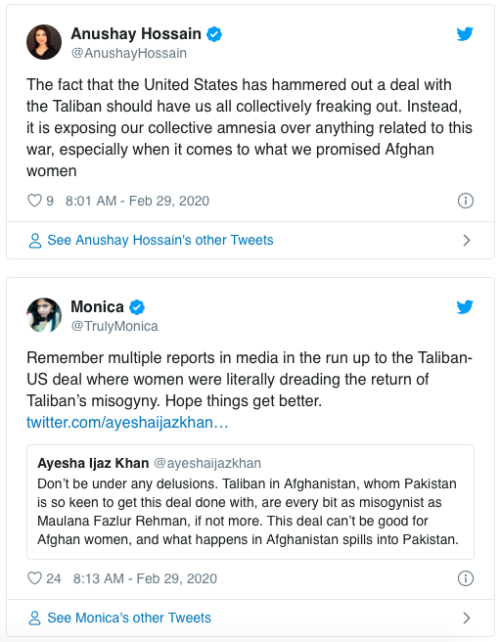 But it was the security of Americans that Esper sought to highlight in Kabul on Saturday.

The defense secretary issued a message of thanks to the almost 800,000 U.S. troops that have served in Afghanistan since the war began. And he cautioned that it will take “many months” to withdraw fully. “Your mission is far from over,” he said, adding that there are still terror groups in Afghanistan.

“Your number one priority remains the protection of our people … stay vigilant,” Esper said.

This agreement is giving me a sense of déjà vu today. I am old enough to have watched the Paris peace negotiations to end the Vietnam war drag on for years with little serious progress (1968-1973). It concluded with the Paris Peace Accords, officially titled the Agreement on Ending the War and Restoring Peace in Viet Nam, signed on January 27, 1973, to establish peace in Vietnam and end the Vietnam War.

The Paris Peace Accords would in effect remove all remaining US Forces, including air and naval forces in exchange for Hanoi’s POWs. Direct U.S. military intervention was ended, and fighting between the three remaining powers temporarily stopped — for less than a day.

The agreement’s provisions were immediately and frequently broken by both North and South Vietnamese forces with no official response from the United States. Open fighting broke out in March 1973, and North Vietnamese offenses enlarged their control by the end of the year. Two years later, a massive North Vietnamese offensive conquered South Vietnam. Saigon fell on April 30, 1975. Not only did North Vietnam conquer South Vietnam, but the communists were also victorious in Cambodia when the Khmer Rouge captured Phnom Penh on April 17, as were the Pathet Lao in Laos successful in capturing Vientiane on December 2. The Paris Peace Accords proved to be a complete failure.

Afghanistan has been at the crossroads of conflict for centuries dating back to ancient times, and has earned its reputation as the the ‘Graveyard of Empires’.

Time is on the side of the Taliban, just as it was for North Vietnam. This agreement allows the Taliban to bide its time. The U.S. will be happy to withdraw its forces from this unpopular war and will lose interest in how the competing factions in Afghanistan resolve the coming power struggle. It is not hard to imagine the more disciplined Taliban overcoming the weak and ineffectual government in Kabul and reasserting its control over Afghanistan.

As long as the Taliban does not make Afghanistan a safe haven again for terrorists organizations like al-Qaida and its offshoot ISIS and affiliated groups from which to attack American interests, the U.S. is unlikely to come to the aid of the puppet Afghan government that it stood up in Kabul.

Color me skeptical. But I’ve seen this movie before.

UPDATE: Well, that didn’t take long. Afghanistan President Ashraf Ghani said on Sunday that he will not release 5,000 Taliban prisoners ahead of peace talks next week, as laid out in a peace agreement that the U.S. signed with the Taliban on Saturday, according to the AP. Afghan peace deal hits first snag over prisoner releases:

Afghanistan’s president said Sunday that he will not free thousands of Taliban prisoners ahead of all-Afghan power-sharing talks set for next week, publicly disagreeing with a timetable for a speedy prisoner release laid out just a day earlier in a U.S.-Taliban peace agreement.

President Ashraf Ghani’s comments pointed to the first hitch in implementing the fragile deal, which is aimed at ending America’s longest war after more than 18 years and getting rival Afghan factions to agree on their country’s future.

Ghani told a news conference in the Afghan capital of Kabul on Sunday that this wasn’t a promise the United States could make. He said the release of any prisoners was a decision for his government to take and that he wasn’t ready to release prisoners before the start of negotiations.

“The request has been made by the United States for the release of prisoners and it can be part of the negotiations but it cannot be a precondition,” Ghani said.

The U.S.-Taliban deal is seen as a historic opportunity to extricate the United States from Afghanistan, a nation convulsed by conflict since the Soviet invasion in December 1979. Yet it could also unravel quickly, particularly if the Taliban fail to deliver on a promise that no terror attacks would be launched from Afghan soil.

The intra-Afghan talks between squabbling political factions and rival Taliban in Afghanistan are even more intricate — even if a potential failure might not slow the withdrawal of American forces.

President Donald Trump told reporters Saturday at the White House that he will be “meeting personally with Taliban leaders in the not-too-distant future,” and described the group as “tired of war.”

He did not say where or why he plans to meet with Taliban leaders. He said he thinks they are serious about the deal they signed but warned that if it fails, the U.S. could restart combat.

“We think we’ll be successful in the end,” he said, referring to all-Afghan peace talks and a final U.S. exit.

But he also warned: “If bad things happen, we’ll go back” in with military firepower.