An Impeachment Trial Unlike Any Other in History (Updated)

An Impeachment Trial Unlike Any Other in History (Updated)

The Senate impeachment trial of former president Donald Trump will take place in February because the defendant has only now been able to secure a lawyer, one referred by Trump Fluffer Sen. Lindsey O. Graham. For the impeachment trial, Trump settles on a South Carolina lawyer arranged through Lindsey Graham.

Former President Donald J. Trump’s new impeachment lawyer, Butch Bowers, is a South Carolina-based attorney who was arranged through Senator Lindsey Graham and has a long history of representing politicians in his home state.

Mr. Bowers will lead Mr. Trump’s defense in the eventual trial for his second impeachment, Mr. Graham and Jason Miller, an adviser to Mr. Trump, confirmed.

I’m sure that Trump Fluffer Sen. Lindsey O. Graham, who unbelievably is still a lawyer, wanted to defend Donald Trump himself, but there would be a serious conflict of interest in him doing that.

You see, this will be the first trial in history in which the jurors are also the victims of the crime, and also the witnesses to the crime. Some may also have been coconspirators and accessories to the crime, or at least aided and abetted the crime or provided aid and comfort to the Trump insurrectionists who stormed the capitol. Democrats ask ethics panel to investigate Sens. Cruz, Hawley.

Keep this victim-witness status in mind when you read that the Sedition Party, held captive by Donald Trump for four long years in a “hostile takeover” of the GOP as Jared Kushner described it, prepare to act like hostages suffering from Stockholm syndrome, a condition in which hostages develop a psychological bond with their captor during captivity.

POLITICO reports that the Sedition Party’s victims-witnesses are prepared to act more like Donald Trump’s defense attorneys, and move to dismiss the impeachment with a specious legal argument. This will be the first trial in history in which the victims-witnesses volunteer to act as defense counsel for the accused. Remember, they all must take an oath that they will be “impartial jurors.” They have already violated this oath even before taking it.  Senate Republicans uniting behind impeachment defense:

Senate Republicans are coalescing around a long-shot bid to dismiss the impeachment trial of former President Donald Trump before it even begins, relying on a disputed legal argument that says putting an ex-president on trial is unconstitutional.

Interviews with more than a dozen GOP senators revealed broad support for the claim that the Senate has no constitutional authority to put a private citizen on trial, which could translate into a substantial number of votes to scrap the trial altogether. The issue came up several times during a Senate GOP conference call Thursday afternoon, according to multiple senators.

Senate Minority Whip John Thune (R-S.D.) said in an interview that concerns about the constitutionality of putting a former officeholder on trial were top of mind among GOP senators — even those who are open to voting to convict Trump on the House’s charge that he incited the insurrection at the Capitol on Jan. 6 that left five people dead.

“Our members, irrespective of what they might think about the merits, just believe that this is an exercise that really isn’t grounded constitutionally and, from a practical standpoint, just makes no sense,” Thune said.

But critics — including scholars from the conservative Federalist Society and other right-leaning organizations — maintain that this specious argument is on flimsy legal ground. Legal scholars, including at Federalist Society, say Trump can be convicted:

Former President Donald Trump can be convicted in an impeachment trial for his role in inciting the Capitol insurrection on Jan. 6 even though he is no longer in office, a bipartisan group of constitutional law scholars wrote in a letter Thursday.

“We differ from one another in our politics, and we also differ from one another on issues of constitutional interpretation,” wrote the signatories, which include the co-founder and other members of the conservative Federalist Society legal group. “But despite our differences, our carefully considered views of the law lead all of us to agree that the Constitution permits the impeachment, conviction, and disqualification of former officers, including presidents.”

More than 150 legal scholars signed on to the letter, which was obtained by POLITICO. They include Steven Calabresi, the co-founder of the Federalist Society; Charles Fried, who served as solicitor general under Ronald Reagan and is now an adviser to the Harvard chapter of the Federalist Society; Ilya Somin, a law professor at George Mason University and adjunct scholar at the libertarian Cato Institute; and Brian Kalt, a law professor at Michigan State University and leading scholar on the specific question of whether former officials can be impeached.

“The Senate lacks constitutional authority to conduct impeachment proceedings against a former president,” Sen. Tom Cotton (R-Ark.) said in a statement last week. “The Founders designed the impeachment process as a way to remove officeholders from public office—not an inquest against private citizens.”

Many Republicans have taken a cue from the conservative former [right-wing] federal appeals Judge J. Michael Luttig, who argued in the Washington Post earlier this month that “once Trump’s term ends on Jan. 20, Congress loses its constitutional authority to continue impeachment proceedings against him — even if the House has already approved articles of impeachment.”

The constitutional scholars who signed on to the letter disagree with that assessment, arguing that because the Constitution’s impeachment power has two aspects — removal from office and disqualification from holding office again in the future — it must also be extended to former officials who could try to run for reelection.

“Impeachment is the exclusive constitutional means for removing a president (or other officer) before his or her term expires,” they wrote. “But nothing in the provision authorizing impeachment-for-removal limits impeachment to situations where it accomplishes removal from office. Indeed, such a reading would thwart and potentially nullify a vital aspect of the impeachment power: the power of the Senate to impose disqualification from future office as a penalty for conviction.”

“If an official could only be disqualified while he or she still held office, then an official who betrayed the public trust and was impeached could avoid accountability simply by resigning one minute before the Senate’s final conviction vote,” they noted. “The Framers did not design the Constitution’s checks and balances to be so easily undermined.”

UPDATE: A recent report by the nonpartisan Congressional Research Service notes, “most scholars who have closely examined the question have concluded that Congress has authority to extend the impeachment process to officials who are no longer in office.” The weight of scholarly evidence points strongly in favor of allowing the Senate to proceed against Trump.

Moreover, federal courts have consistently deferred to Congress’ “sole power” to set its own rules and procedures, including over impeachment proceedings.

Still, Republicans’ contention is shaping up to be a central theme of the ex-president’s defense strategy in the Senate’s upcoming trial, with several GOP senators publicly echoing it in recent days even as they signal increased hostility toward Trump over the attack on the Capitol.

“I think the key point is, is it constitutional to do this when somebody is out of office — and then, is it purely retribution when you try to push it forward,” Sen. Mike Braun (R-Ind.) said. “[That’s] not to dismiss any of the enormity of the day itself.”

“I think it is one of the most potent arguments [for Trump], absolutely,” added Sen. Lindsey Graham (R-S.C.), a top Trump ally who has been pushing for a vote on dismissing the trial at its outset.

If Donald Trump’s actual defense attorney, Butch Bowers, is no better an attorney than Trump Fluffer Sen. Lindsey O. Graham, he has inadequate counsel and he will be convicted by the Senate.

Note: Sen. Mike Braun (R-Ind.) previously said he planned to object to the counting of some electoral college votes, but did not do so on the Arizona or Pennsylvania objection, only after the Capitol was stormed by Trump insurrectionists. Sens. Cotton and Graham also voted to certify the electoral college results.

UPDATE: What? The Krazy Kraken Lady wasn’t available? These Looney Tunes keep turning up, like a bad penny. Here’s a blast from the past, the Birther Queen is baaack: Dentist-Lawyer Orly Taitz Sues VP Kamala Harris, Claims Trump Impeachment Trial Is Unconstitutional: 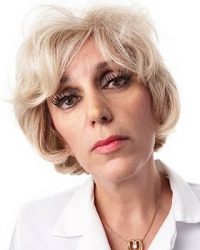 Orly Taitz, the birther conspiracy theorist, dentist, and attorney [seriously? This crazy lady hasn’t been disbarred?] who led the “birther” movement’s litigation to contest the reality that Barack Obama was born in the United States, is suing Vice President Kamala Harris and Senate Majority Leader Chuck Schumer (D-N.Y.) in an attempt to stop the U.S. Senate from presiding over a trial connected to former President Donald Trump’s historic second impeachment.

In a Thursday press release, Taitz said the lawsuit, filed on behalf of the Defend Our Freedoms Foundation, or DOFF, would attempt to persuade a court that any upcoming Trump impeachment trial in the U.S. Senate would be unconstitutional. Her rationale is that the “plain language” of the Constitution allows only an impeachment “trial of a sitting president, not a private individual,” and gives the Senate “only one remedy, removal from office.” Taitz says any attempt to try Trump in the senate would merely be an attempt to prevent the ex-president “from running for office again,” and she says such a move would “deprive” DOFF members of their “First Amendment right for the [sic] political speech, namely, to vote for Donald Trump in future elections.”

The lawsuit, which was filed in U.S. District Court for the Central District of California, Santa Ana Division, describes itself as a complaint for injunctive and declaratory relief. It says “nearly 75 million Americans,” or “roughly half of the US voters,” cast ballots for Donald Trump in Nov. 2020 and “intend to vote for him in 2024.”

The barely 5-page-long document cites only one legal authority: Article 2, Section 4 of the constitution. It reads:

The President, Vice President and all civil officers of the United States, shall be removed from office on impeachment for, and conviction of, treason, bribery, or other high crimes and misdemeanors.

An easy motion to dismiss, and motion to impose Rule 11 sanctions. And this time refer her to the State Bar of California for disciplinary action.

Taitz was once referred to as a “birther queen” and as an “astonishing Russian dentist” for filing a flurry of lawsuits which challenged Obama’s place of birth. As such, her interests have long aligned with Trump’s. Recall that Trump also a frequent critic of Obama’s legal ability to actually run for president.