And the children shall lead them: March For Our Lives’ ‘Peace Plan For A Safer America’

Home/AZ Politics/And the children shall lead them: March For Our Lives’ ‘Peace Plan For A Safer America’
Previous Next

And the children shall lead them: March For Our Lives’ ‘Peace Plan For A Safer America’

Last week, the students who survived the horror of last year’s mass shooting at Marjory Stoneman Douglas High School, who ignited the grass-roots movement of “March For Our Lives” that has given youthful new vigor to the fight for gun safety, announced a bold gun-control proposal that aims to reframe the debate on gun policy.

The Washington Post editorialized, A plan to end gun violence from students who survived it:

The ambitious agenda unveiled Wednesday by March for Our Lives, a group led by student survivors of the Valentine’s Day school shooting in Parkland, Fla., in which 17 people were killed, comes in the wake of this month’s back-to-back mass shootings that killed 31 people in El Paso and Dayton, Ohio. “A Peace Plan for a Safer America” calls for a ban on assault-style weapons and high-capacity magazines, a national licensing and gun registry, a mandatory gun buyback program for assault-style weapons, a rigorous licensing system and other measures to combat not just mass shootings but also suicides and domestic and urban violence. 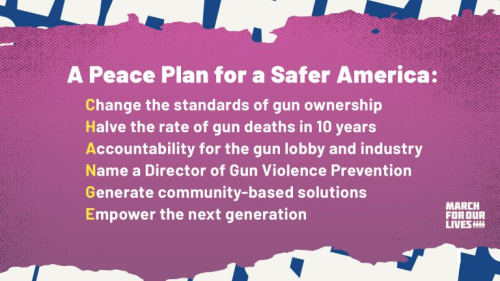 “It’s nothing like anyone else is proposing,” said Parkland survivor and March for Our Lives board member Tyah-Amoy Roberts. Indeed, the plan would go well beyond the modest gun-control measures such as expanded background checks and “red flag” laws that have been the focus of the current debate. Given the difficulty of enacting even those bare-boned safeguards — thanks to the sniffling obeisance of President Trump and other Republicans to the gun lobby — one might wonder if there is a pie-in-the-sky aspect to the students’ agenda.

“We know this seems ambitious, given Washington’s apathy to decades of bloodshed in our schools, neighborhoods, and even our houses of worship,” March for Our Lives co-founder and Parkland survivor David Hogg wrote on Twitter in a clear-eyed acknowledgment of what the group faces. But the refusal of these student activists to accept the status quo and to instead fight for what makes sense has already produced results, including modest gun reforms in Florida and other states and the mobilization of young voters that helped Democrats in last year’s midterm elections.

As March For Our Lives says on its website:

We don’t have to live like this: in fear for our lives and our families. The federal government has failed in its responsibility to protect the safety and well-being of the public with regard to the nation’s gun violence epidemic. The time for comprehensive and sweeping reform is now. We need ambitious leadership throughout the whole of government to stand in opposition to the gun lobby and industry in order to secure a peaceful America for generations to come.

Everywhere we look, gun violence is decimating our families and communities. Whether it’s the mass shootings in shopping malls, concerts, schools, and places of worship, the retaliatory gun violence in urban neighborhoods haunted by the legacy of economic disinvestment, racism, and poverty, or the solitary suicides committed nationwide with increasing frequency, gun violence adds up: over 100 Americans die from it every day. 100 lives lost every single day. We started March For Our Lives to say, “Not One More.” No more school shooting drills. No more burying loved ones. No more American exceptionalism in all the wrong ways. But we cannot do this alone. We need leaders – in the White House, in Congress, and on the Supreme Court – who care about the future of our children and our nation. We call on every Presidential candidate for the 2020 election to endorse our Peace Plan for a Safer America.

The Kids Are Alright. It’s the greedy old bastards in the Washington swamp of corrupt lobbyists and politicians — looking at you “Massacre Mitch” McConnell, who blocks every gun safety reform bill out of fear of the NRA, the lobbyist for the merchants of death — who are to blame. If Republicans will not do anything to stop this “American carnage,” then it is time for all of them to go. They have failed their moral obligation to protect American lives from preventable gun violence. As the protestors in Dayton, Ohio pleaded: “Do something!” If you do not, leave!