Above Photo: Each pair of shoes represents a child killed since Sandy Hook.

The month of August ended the way it began, with yet another mass shooting in the state of Texas. Texas Shooting Leaves 7 Dead and At Least 21 Injured Near Odessa:

Seven people were killed and at least 21 others were injured in a brazen daylight drive-by mass shooting in the West Texas cities of Midland and Odessa on Saturday, as a gunman drove on the highways and streets opening fire on residents, motorists and shoppers, the authorities said.

The chief of the Odessa Police Department, Michael Gerke, said at a news conference on Saturday that the attack had begun after a traffic stop. The gunman fled the police and hijacked a postal truck, firing at civilians as he made his way into Odessa.

Three law enforcement officers and a toddler were among those wounded, before the police shot and killed the gunman, a man in his mid-30s, near a movie theater on the outskirts of Odessa. The police said the gunman’s motive was not immediately clear.

In Texas alone since 2017, there have been four mass shootings including the one Saturday … It comes a week before Congress reconvenes and just one day before Texas is set to ease some gun restrictions, making it easier to carry handguns in churches and schools.

In January, the Supreme Court agreed to hear a challenge to New York City’s ban on transporting guns – including those that are licensed and unloaded – anywhere outside the city limits. See, New York State Rifle & Pistol Association Inc. v. City of New York, New York.

The case would be the first time in nearly a decade that the justices would weigh in on how far states and cities can go in restricting gun rights, but it is now unclear whether the justices Supreme Court will reach the merits of the challenge.

[In July] the city told the Supreme Court that the case is moot – that is, no longer a live controversy – as a result of both changes to the city’s rules and new state laws.

In a letter to Scott Harris, the clerk of the Supreme Court, lawyer Richard Dearing first explained that the city had changed its rules to allow licensed gun owners to transport their guns to, among other places, second homes and shooting ranges outside the city. That regulation will go into effect on July 21. The New York legislature has also passed a law … that would allow licensed gun owners to transport handguns to another place where they are allowed to have them, Dearing continued, including second homes and shooting ranges.

The case is moot, Dearing argued, because the “new city regulation gives” the challengers “everything they have sought in this lawsuit. The new state law, upon signature by the governor, will make the case doubly moot.” Dearing asked the justices to send the case back to the lower court with instructions to dismiss it. If the court does not do so, Dearing noted, the city “will file a brief on the designated due date maintaining in greater detail that the case is moot.” The city does not intend, Dearing made clear, to address the merits of the challengers’ claim. The city’s brief on the merits [was] due on August 5, 2019.

[On July 8, the Supreme Court’s electronic docket indicated that the letter had not been accepted for filing.]

The New York State Rifle and Pistol Association responded to the city’s letter, calling it “both premature and procedurally improper.”

They really want the new conservative majority on the Supreme Court to rule on this case whether there is an actual case and controversy to be decided, because they believe that the conservative majority is going to overrule most, if not all, regulation of firearms. It is a years long “project” of the far-right before the court. It is also a tacit admission that this Supreme Court has been politicized.

In mid-August, Senator Sheldon Whitehouse, a former prosecutor, filed an amicus brief with the Court on behalf of Democratic senators that boldly accused the conservative majority on the court of having politicized the court – something litigants are not supposed to do under rules of decorum and protocol – and the right-wing pearl clutchers pitched a fit. “How dare you point out what is obvious for all to see!” Democrats warn Supreme Court it’s too unhealthy to hear gun case:

A Senate Democrat warned the Supreme Court this week not to hear a case involving a New York City gun control law, saying the GOP-appointed majority is too tainted to deliver a valid ruling.

The stunning filing by Sen. Sheldon Whitehouse, Rhode Island Democrat, argues the court has become too partisan and has produced too many ideologically divided rulings, damaging the public’s trust in the federal judiciary.

He warned of looming changes the political branches could force on the court should it fail to show restraint.

“The Supreme Court is not well. And the people know it,” Mr. Whitehouse argued in his brief. “Perhaps the court can heal itself before the public demands it be ‘restructured in order to reduce the influence of politics.’ Particularly on the urgent issue of gun control, a nation desperately needs it to heal.”

He complained that secret interests are attempting to subvert justice at the court, pointing to a number of amicus briefs filed on behalf of Second Amendment rights advocates that he said are puppets of the National Rifle Association, the Federalist Society and other conservative organizations.

“Out in the real world, Americans are murdered each day with firearms in classrooms or movie theaters or churches or city streets, and a generation of preschoolers is being trained in active-shooter survival drills,” he wrote.

He continued: “In the cloistered confines of this court, and notwithstanding the public imperatives of these massacres, the NRA and its allies brashly presume, in word and deed, that they have a friendly audience for their ‘project.’”

Mr. Whitehouse and a host of other Democrats and liberal activist groups are now pleading with the high court to refuse to hear the case, arguing New York has made it moot.

They fear a 5-4 ruling would expand on the last 12 years of pro-gun rulings.

Mr. Whitehouse, in his brief, argued a series of similar rulings with “bare partisan majorities” has damaged the public trust in the federal judiciary.

Mr. Whitehouse, a member of the Senate Judiciary Committee that vets federal judges, pointed out in his brief that Justice Brett M. Kavanaugh, confirmed to the court last year, was backed by the NRA during his confirmation process.

“Confident that a Court majority assures their success,” he writes, “petitioners laid their cards on the table: ‘The project this Court began in Heller and McDonald cannot end with those precedents,’ petitioners submit.” They are literally calling the actions of conservative justices on the Supreme Court to overturn gun safety laws their shared “project.“

Senator Whitehouse reached the point that he has no fucks left to give. Just tell it like it is, and let the chips fall where they may. 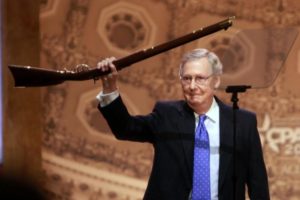 Needless to say, the Democratic senators’  brief has provoked criticism from conservatives who called it malicious and an attempt to intimidate the high court. A Wall Street Journal editorial called the filing an “enemy of the court” brief. “Massacre” Mitch McConnell, who refuses to bring bipartisan gun control legislation to the floor of the Senate for a vote, Accused Democrats of Browbeating Supreme Court Into Pro-gun Control Ruling (actually, Democrats just want this moot case dismissed).

The far-right Federalist Society, which Republicans have given the exclusive right to hand-pick judges for the federal judiciary, whined that Sen. Whitehouse Threatens U.S. Supreme Court Over New York Gun Case. This political advocacy organization wants the court to decide this moot case, arguing that:

[Q]uitting before you lose is a litigation trick so well-established that it has a name: “voluntary cessation.” The courts often find voluntary cessation cases are not moot because the offending party can simply resume the challenged activity once the court dismisses the case.

Whitehouse urges the Supreme Court to reject this straightforward conclusion.

Despite granting certiorari in January, the U.S. Supreme Court has set its oral argument calendar for October and November, and New York State Rifle &amp; Pistol Association Inc. v. City of New York, New York has not yet been set for oral argument. Nor has the court ruled on the City of New York’s request, and other amicus briefs, to dismiss this case as moot.

A review of the docket indicates that there have been an inordinate number of amicus briefs filed by both gun advocacy and gun control advocacy organizations. These organizations are essentially asking a politicized Supreme Court to decide a political question in a case that is now moot – a political decision that is best left to the legislative branch of government, rather than five conservative justices of the Supreme Court. The court should not be in the business of legislating policy.

The fact that the legislative branch has been paralyzed into inaction by the corrupt “Massacre” Mitch McConnell is a political matter for the voters of America to correct with their votes in November 2020.

The Supreme Court should dismiss this case as moot, and allow the political process to sort it out.