Confirmed COVID-19 cases in Arizona reached 241,165 on Wednesday, Oct. 27, an increase of 1,044 from the previous day, according to the Arizona Department of Health Services.

A prominent health expert expressed worry about rising COVID-19 numbers across Arizona, saying the trend is reminiscent of early summer conditions that preceded a spike in cases and rollback of measures to reopen businesses. COVID-19 cases in Arizona surpass 240,000:

“This is a moment to sort of stop and take measure and think hard about: What can we do to prevent this?” said Joshua LaBaer, executive director of Arizona State University’s Biodesign Institute, which is tracking case trends across Arizona’s 15 counties, as well as in the state overall and the nation.

LaBaer said the numbers of new cases reported recently by the Arizona Department of Health Services are figures “we haven’t seen that in a while.”

“In terms of numbers of new cases, we are on a path headed toward exponential growth,” LaBaer said. “The tricky thing about exponential growth is that it doesn’t look like it’s growing very fast at first. The numbers day over day don’t look like they’re big changes. But then all of a sudden, it really can take off. And so I am concerned.” 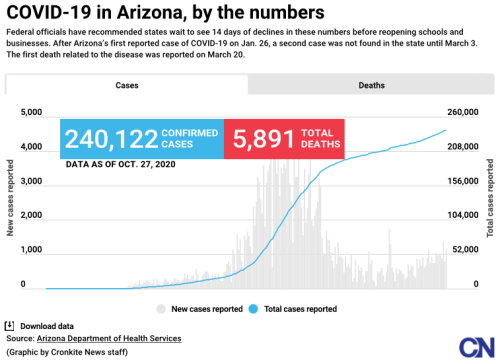 In other words, we are looking at a potential big spike in COVID-19 cases over the holiday season if people do not wear masks and social distance in public, limit social gatherings and frequently wash their hands.

A group of Tucson residents has begun an effort to recall Mayor Regina Romero.

Initiated by residents Joseph Morgan, Dawn Polotto and Alexander McKenna, the petition is a result of what they are calling “Romero’s failure to fulfill her duties as the Mayor of Tucson.” Morgan, the lead organizer, is also the administrator of a social media group called RecallRegina2020.

This is the same Joseph Morgan who ran for Congress in the Republican primary in CD 2, and finished a distant third in a three-way primary. Go figure.

This head case is a major piece of work:

Joseph Morgan, who is running in the GOP primary to represent Arizona’s 2nd Congressional District, has spent recent weeks calling public health advocates “Big Brother” and characterizing Tucson city government as a monarchy. Along with that, he co-opted the “My Body, My Choice” dictum of the reproductive justice movement, a slogan he repurposed as a signal of noncompliance with public health advisories. Morgan is appalled at the idea that a deadly pandemic, which by the end of June had brought more than 119,000 deaths to the U.S., should merit any precautions that don’t fit his personal whims and anti-science politics.

On Thursday, June 18, Tucson Mayor Regina Romero signed a proclamation calling for the use of face masks in public, citing the alarming increase of COVID-19 cases in Pima County, from 2,382 at the beginning of the month to 4,329 at mid-month. In response to that rise, the proclamation mandated that Tucsonans follow CDC guidelines and use cloth face coverings to slow the spread of infections.

Morgan, whose campaign Facebook page is full of regular ridicule of COVID-19 concerns, quickly became a voice of opposition to the mask mandate — and a loud and influential one at that. Morgan was soon using Facebook as his platform to organize a protest, a call to action that was echoed on MeetUp as well. On the following Saturday, when the mandate officially took effect, a post in MeetUp’s “Tucson Trump MAGA” group announced, “Protest today w[ith] Joseph Morgan [at] mayor [Romero’s] home.”

Late that afternoon, Morgan and his group arrived at Mayor Romero’s house, bearing signs that were strong in hyperbole but weak in fact-checking. One sign warned, “Wearing a Face Mask Suppresses the Immune System.” It’s a claim from a viral Facebook post that has been roundly rejected by credible sources. Another sign proclaimed an “Inflated COVID Death Rate,” an accusation that Snopes places in the realm of fantasy.

As if the questionable claims weren’t enough, so was the choice of venue. Arizona law prohibits residential picketing — or protests in front of private homes — declaring it a “class 3 misdemeanor” when someone “engages in picketing or otherwise demonstrates before or about the residence or dwelling place of an individual.” Romero later called the rally an act of “intimidation” that put the health of her family and the public at risk during a pandemic.

On its website, the group identifies several complaints toward the mayor, which include her decision to remove Tucson police officers from election polls, her approval of a “Black Lives Matter” banner at city hall and her One Million Trees Initiative as well as her backing of a citywide mask mandate.

Let’s break this down:

Any conduct that intimidates voters is prohibited by federal law and several states expressly forbid law enforcement presence at the polls. Arizona Secretary of State Katie Hobbs has posted this Guidance on Voting Location Conduct and Preventing Voter Intimidation which includes this provision:

Generally, law enforcement officers, whether uniformed or plain-clothes, should not be stationed within the 75-foot limit of a voting location. Exceptions may apply if the officer is voting, if the voting location is located within a public safety building, or if an officer is called to respond to a specific emergency.

The presence of uniformed law enforcement personnel at a voting location, whether in or outside of the 75-foot limit, may have the effect of intimidating voters. Counties will balance this potentially intimidating effect with the need to preserve the peace and respond to emergencies.

As noted below, each voting location is overseen by an inspector and has a designated election marshal charged with keeping order in and around the voting location. Poll workers should make all reasonable efforts to de-escalate disturbances without engaging law enforcement whenever possible. Situations that cannot be solved by poll workers should be resolved with the assistance of county election officials. In circumstances where there is violence or threats of violence, including any instance when a private citizen carries a weapon into the 75-foot limit, the marshal or election officials should contact law enforcement for the limited purpose of resolving that situation.

Their objection to the “Black Lives Matter” banner simply indicates that these COVID-deniers share their Dear Leader’s white nationalist racism and xenophobia as well:

On the group’s Facebook page, many members have expressed their support for President Trump as well as their opposition against the Black Lives Matter movement. The group has also openly opposed the sanctuary city initiative, saying “many (but not all) illegals are gang members, murderers, child traffickers, drug dealers, identity theft, and gun runners.”

Could it also have something to do with the fact that Mayor Regina Romero is Tucson’s first Latina mayor? Sure, you know it does.

I have no idea why these losers are objecting to the “One Million Trees” initiative, other than they also appear to be climate change deniers in addition to being COVID-deniers:

In a video on the group’s website, Morgan accused Romero of “lawless behavior” and a “Marxist agenda” and criticized her for promoting “things like climate change rather than taking care of our streets.”

I think we can all agree that these losers are “fringe” wingnuts, to be generous. I strongly suspect they may also traffick in QAnon cult conspiracy theories as well. They certainly fit the type.

“Tucsonans can evaluate whether they believe masking up protects our community’s public health,” Romero said in a statement Tuesday. “I happen to disagree with this group, who gathered outside my personal residence earlier this year, that wearing masks is ‘tyrannical.’”

So what comes next?

After filing for the petition with the City Clerk’s Office on Monday, the individuals have 120 days to gather nearly 25,000 valid signatures. If the petition gets enough valid signatures by the deadline, the mayor would either have five days to resign or be automatically placed on the ballot for the recall election.

The city clerk will then have 10 days to examine the petitions and the Pima County Recorder’s office will have 60 days to certify the number of valid signatures.

If the group’s effort is sufficient, the mayor will have the opportunity to resign or face a recall vote. After that, the mayor and city council will have no more than 30 days to call an election.

The only appropriate response if you are approached by someone with this recall petition is “Fuck off!”  We are not going to waste any time and money on a COVID-denier recall election during a deadly pandemic.  Even if these losers did manage to get a recall election, they are going to get crushed by Tucson’s Democratic voters, and everyone including them knows it. So what is the point? Other than these losers are desperately seeking public attention for their “fringe” wingnut ravings.