Last week the Bureau of Economic Analysis released data that real gross domestic product (GDP) increased at an annual rate of only 0.7 percent in the first quarter of 2017.  CNBC reported, US first-quarter growth weakest in three years, as consumer spending falters:

The U.S. economy grew at its weakest pace in three years in the first quarter as consumer spending barely increased and businesses invested less on inventories, in a potential setback to President Donald Trump’s promise to boost growth.

Gross domestic product increased at a 0.7 percent annual rate also as the government cut back on defense spending, the Commerce Department said on Friday. That was the weakest performance since the first quarter of 2014.

The pedestrian first-quarter growth pace is, however, not a true picture of the economy’s health. The labor market is near full employment and consumer confidence is near multi-year highs, suggesting that the mostly weather-induced sharp slowdown in consumer spending is probably temporary.

“First quarter GDP tends to underperform because of difficulties with the calculation of data that the government has acknowledged and is working to rectify.”

After a sluggish month for the U.S. job market in March, many were eager to see whether the slide would continue, or whether we’d seen an improvement as winter turned to spring.

As is turns out, it now looks like the latter is true. The Bureau of Labor Statistics reported this morning that the U.S. economy added 211,000 jobs in April, more than double March’s total. The unemployment rate inched lower to 4.4%, the lowest since the summer of 2007, before the start of the Great Recession. 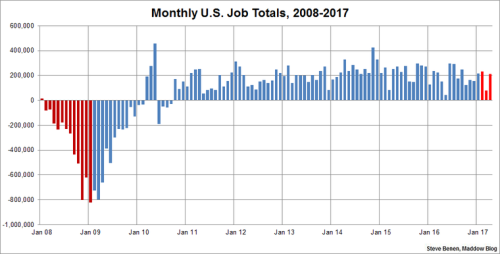 As for the revisions, February’s tally was revised up a little, while March’s totals were revised down a little, and combined they show a net loss of about 6,000 jobs. 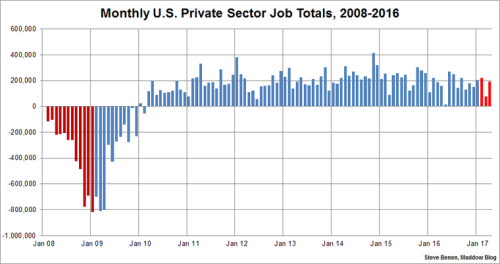 Matt O’Brien of the Washington Post’s Wonkblog says that slow and steady growth has recovered the economy from the Great Recession to where it was in  2007. America’s economy has been made adequate again:

By most measures, the economy is finally back to where it was before the Great Recession hit. All it took was eight years of slow-and-steady job growth. Which, of course, is exactly what we got in April. The economy added 211,000 jobs, bringing both the unemployment rate and the broader one that includes people who can only find part-time jobs — or have taken a break from looking — to 10-year lows, respectively, of 4.4 and 8.6 percent.

But our “new normal” hasn’t returned us to normalcy just yet. Take what are called “prime-age” workers. These are 25- to 54-year-olds who, for the most part, should be too old to still be in school but too young to be retired. Before the crash, 80.2 percent of them were working, but afterward, that fell to 74.8 percent. Today, that has rebounded to 78.6 percent, which is about three-quarters of the way back to where it was — or, in other words, about two years away from the recovery reaching its final destination. You can see the same sort of thing in wages. Those are rising a bit more, especially when you account for the fact that productivity growth has basically been nonexistent, but the 2.5 percent wages have gone up the past year isn’t what we would expect for an economy nearing full employment.

Indeed, Jared Bernstein cautions, Is the U.S. labor market finally at full employment? Not according to the inflation numbers.

Hours of work, that is, as Friday morning’s employment report showed that employers added 211,000 jobs in April, as the unemployment rate ticked down to 4.4 percent, its lowest level since May 2007.

Other measures of labor market slack also showed notable gains. The underemployment rate, at 8.6 percent, is about at the level I consider to be consistent with full employment. Long-term unemployment — which was very highly elevated throughout earlier years of this recovery — is back down to about 1 percent of the labor force; that’s the lowest since May 2008 and almost back to its pre-recessionary low point. The number of involuntary part-timers — the group that, along with the unemployed, drives the underemployment rate — is down almost 4 million from its peak (it was 9.2 million in September 2010 and was 5.3 million in April).

So, we’re at full employment, right? By which I mean that highly desired state wherein the number of jobs matches up very tightly to the number of job seekers. If so, that would be an important advance along many dimensions:

Which brings me to my punchline: For all the indicators that we’re at full employment, there’s a very important one that leaves me at least somewhat skeptical, and that is … wait for it … inflation!

The main way economists decide we’re at full employment is by observing the correlation between inflation and unemployment. Here’s the alleged sequencing: First, the tight labor market leads to faster wage growth. That squeezes employers’ profit margins and thus leads them to pass as much of those increased labor costs forward to consumers, lifting inflation.

Unemployment has indeed fallen to levels consistent with the Federal Reserve’s version of full employment, and wage growth has accelerated a bit. It was around 2 percent; it’s now about 2.5 percent. But inflation — I’m using the PCE core measure here, one favored by the Fed — hasn’t picked up much at all and remains below the Fed’s target rate of 2 percent, where it has been for years now.

Here’s what I think is going on, though I’ll have more to say about this Monday. (I hope the anticipation doesn’t ruin your weekend!)

Why not? I’ll get into that next week, but my point today is that while I happily welcome and celebrate the much tightened job market, it’s hard to make a compelling case that we’re at full employment with inflation, while accelerating a touch, still largely puttering along.

UPDATE: Economists expect that millions of American jobs are going to be replaced by automation in the coming decades. But where will those job losses take place? Which areas will be hardest hit?  The Atlantic reports, The Parts of America Most Susceptible to Automation (excerpt):

Moenius and colleagues used a widely cited 2013 study from Oxford University predicting which of roughly 700 common jobs are most susceptible to automation, and then mapped out which metropolitan areas have a high share of those jobs. That study, by the economists Carl Benedikt Frey and Michael A. Osborne, suggested that 47 percent of total U.S. employment is at risk of automation over the next decade or two; they found that telemarketers, insurance underwriters and appraisers, tax preparers, and cashiers were some of the most likely to see their jobs threatened by automation, while the livelihoods of mental-health and substance-abuse social workers, oral surgeons, choreographers, and physicians were more protected.

Frey and Osborne’s estimates cover about 138 million Americans’ jobs. Moenius and his colleagues found that Las Vegas, Riverside, and El Paso all had high numbers of office and administrative-support jobs, food-preparation and -serving jobs, and sales jobs, and thus had the most vulnerability to automation. Moenius estimates that 65.2 percent of jobs in Las Vegas, 63.9 percent in El Paso, and 62.6 percent of jobs in Riverside are susceptible to automation in the next two decades. The automation of transportation and material-moving jobs also contributed to the potential job loss in these places, as well as in Greensboro, North Carolina, where 62.5 percent of jobs are susceptible to automation.

“What’s particularly striking about the new Redlands report is that the regions that are susceptible to automation are those that already have a high share of low-wage jobs.”

And this from the Pew Research Center this week: The Future of Jobs and Jobs Training (excerpt):

Machines are eating humans’ jobs talents. And it’s not just about jobs that are repetitive and low-skill. Automation, robotics, algorithms and artificial intelligence (AI) in recent times have shown they can do equal or sometimes even better work than humans who are dermatologists, insurance claims adjusters, lawyers, seismic testers in oil fields, sports journalists and financial reporters, crew members on guided-missile destroyers, hiring managers, psychological testers, retail salespeople, and border patrol agents. Moreover, there is growing anxiety that technology developments on the near horizon will crush the jobs of the millions who drive cars and trucks, analyze medical tests and data, perform middle management chores, dispense medicine, trade stocks and evaluate markets, fight on battlefields, perform government functions, and even replace those who program software – that is, the creators of algorithms.

Multiple studies have documented that  massive numbers of jobs are at risk as programmed devices – many of them smart, autonomous systems – continue their march into workplaces. A recent study by labor economists found that “one more robot per thousand workers reduces the employment to population ratio by about 0.18-0.34 percentage points and wages by 0.25-0.5 percent.”

Pew Research Center and Elon’s Imagining the Internet Center conducted a large-scale canvassing of technologists, scholars, practitioners, strategic thinkers and education leaders in the summer of 2016, asking them to weigh in on the likely future of workplace training.

Some 1,408 responded to the following question, sharing their expectations about what is likely to evolve by 2026:

In the next 10 years, do you think we will see the emergence of new educational and training programs that can successfully train large numbers of workers in the skills they will need to perform the jobs of the future?

The nonscientific canvassing found that 70% of these particular respondents said “yes” – such programs would emerge and be successful. A majority among the 30% who said “no” generally do not believe adaptation in teaching environments will be sufficient to teach new skills at the scale that is necessary to help workers keep abreast of the tech changes that will upend millions of jobs. (See “About this canvassing of experts” for further details about the limits of this sample.)