APS stooges running for AZ Corp Comm are shady, even for Republicans.

Home/AZ Politics/APS stooges running for AZ Corp Comm are shady, even for Republicans.
Previous Next

APS stooges running for AZ Corp Comm are shady, even for Republicans. 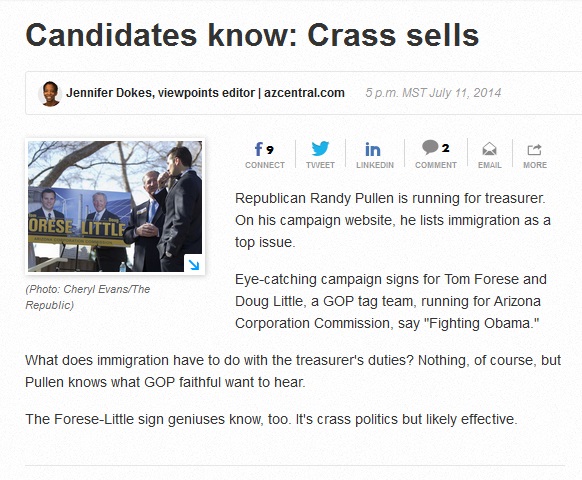 Candidates Forese and Little in front of a sign that was not paid for until a month later.

With all the important midterm races going on in Arizona this year, you may not have been following the shocking and brazen behavior of the Republican candidates for AZ Corporation Commission. Doug Forese and Tom Little are the favored candidates of Arizona Public Service (APS), which is the state’s largest utility (and is really a private corporation despite its name). But Forese and Little are running under the state’s Clean Elections funding, which means they have to pretend they aren’t wholly owned subsidiaries of APS for the duration of the election season. This has apparently not been as easy for them to pull off as one might think, since Forese and Little are the subject of complaints to the Clean Elections Commission about their highly dubious campaign activities and finance reporting.

Here’s AZ Capitol Times with a rundown of the complaint centering on signature collection:

Little reported paying $2,790 for paid signatures. Forese didn’t report paying for any. The vast majority of the 14,823 signatures submitted between the two of them were collected by professional signature gatherers.

Jim Barton, an attorney representing the Democratic Party, wrote in the complaint that an investigation into the matter is warranted because of the number of signatures submitted by the two candidates, who are running as a team, has a market value of roughly $19,500.

Because the two candidates are running under the state’s public financing system, their campaign spending is subject to increased scrutiny by the Clean Elections office. They could be fined, or even removed from the ballot if violations are valued at more than $24,405.

A complaint filed by Barton last week alleges that the two candidates either illegally went into debt to produce campaign signs, or illegally spent primary-specific money for the general election.

A complaint filed on September 9th has to do with the mysterious appearance of Little and Forese signs before there was any indication of them being paid for. Attorney Jim Barton, who is representing the AZ Democratic Party in the complaint, alerted the Commission to campaign finance reports stating that Forese and Little both made payments of most of their Clean Elections primary allotment to an outfit called Americopy on August 13th and August 11th, respectively. Americopy is owned by Alan Heywood, who happens to be the campaign manager for both Forese and Little.

If there were signs up prior to August 11th and 13th, then the candidates would be in trouble for getting what amounts to an illegal loan from their campaign manager. I’m sure I saw their signs well before August but you don’t have to take my recollection on that when there are seven people prepared to testify seeing the signs in July, according to the complaint. And remember that Forese and Little were in a tough primary against Vernon Parker and Lucy Mason, who were running as a more renewable energy-friendly team. Even if they wanted to pull some shenanigans to put all their primary money toward the general election (which is illegal with Clean Elections funding), they still needed to spend something in the primary to get their name out. And oh look, here are Forese and Little standing in front of one of their signs in July for a Republic photo op!

Once the complaint was out, and getting local media coverage, liberal activists around the state began noticing that Forese and Little signs were disappearing at a rapid clip. A source close to one of the Democratic candidates told me that his volunteers estimate that up to 80% of their signs were gone by mid-September. A man named Derrick Lee, who puts up signs for a living, reported to Jim Barton that he worked for Americopy and put up many of the Forese/Little signs. Lee said that Americopy is scrupulous – to the point of anal-retentiveness – about precise sign placement and accounting of their locations. Lee has made himself available for testimony about Americopy’s business practices, according to Barton in an email to the Commission. This mysterious disappearance of signs looks very much like an attempt to by the candidates and Americopy cover their tracks.

So where is APS in all this? They are believed to be the main funding source of independent expenditure (IE) dark money spent to defeat Forese’s and Little’s primary opponents, with a whopping $800K spent to defeat Vernon Parker alone. APS is expected to go after Democrats Sandra Kennedy and Jim Holway with more dark money in the general and may even play in Attorney General and Secretary of State race. My Democratic source tells me he believes the shady activity of the Republican Corp Comm candidates goes all the way up to the top of APS. Considering what a collection of doofuses Forese, Little, and their campaign manager Heywood appear to be, it shouldn’t be too difficult to determine if criminal conspiracy charges are warranted, if those in the position to do that are so inclined.

At the very least there should be enough evidence of brazen Clean Elections violations to get Forese and Little off the ballot.