The United States Economy erased five years of economic expansion when the government announced that the Gross Domestic Product shrunk by almost 33 percent in the second quarter of 2020. 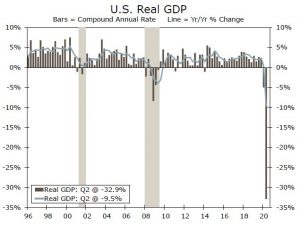 The immediate cause of this contraction is the Coronavirus Pandemic.

A secondary reason for the largest economic collapse in United States History is how Mr. Trump and his allies in Congress and the nation mishandled COVID 19 across the country.

To be sure, the economy would have probably gone into recession with the pandemic no matter who sat in the White House.

However, people have to understand that Trump and his Fox Island-Trump Zone followers totally exacerbated the severity of the economic downturn with their science-denying, all is well, and every man for themselves prescriptions for the nation.

The economy probably would not have lapsed as much with a more competent and reality-based Administration.

Furthermore, the economy will only get worse if Republicans do not get serious and negotiate new Coronavirus aid legislation that includes:

Readers need to be reminded that Democrats in the House of Representatives passed their aid measure, the HEROES Act, back in May.

Republicans in the Senate under the “leadership” of Enemy of the People-Political Prince of Darkness Mitch McConnell decided to putz around until last week when they released their Dead-on Arrival Heals Act that Mr. Trump and 20 of the Republican Senate Caucus disowned shortly after its release.

Democrats rightfully want a deal that will take the country into the new year, past the elections when a new Congress with hopefully a new President will preside.

They do not want to spend the time passing one-week extensions that fail to fully solve the immediate problems facing the country.

Arizona Democrats offered their views on the economy and what should be done.

The Arizona Democratic Party released a statement on July 30 that read:

“Despite the Trump Administration’s denial of the economic recession, the country awoke today to the news that the U.S. economy suffered the worst quarter since World War Two as GDP shrank by 32.9%”

“No one understands the economic calamity on our hands better than struggling Arizonans. Weekly unemployment numbers in Arizona jumped by 19,000 first-time claims last week to 289,000 first-time filers. The number of continuing claims is also continuing to hover near three million.”

“And new reports indicate that Arizona’s economy lost between $1 billion and $1.9 billion in stimulus funding because the state’s unemployment system kept people from accessing the weekly $600 payments.”

“With 96 days to go until election day, Arizonans have a choice to make,” said Matt Grodsky Arizona Democratic Party spokesman, “Double down on an aimless President who surrendered to the pandemic and economic fallout or elect a new President with a real economic recovery plan and the experience to get it done. Arizonans will choose Vice President Biden.”

Many of Arizona’s elected Democrats in Congress posted their views on social media.

The State Legislature should also take action – we’re the 2nd lowest in the US.

It's time for the Senate to pass the #HeroesAct and extend increased unemployment insurance.https://t.co/1gM51hLaM5

Now is not the time for Congress to adjourn. I am calling on Senate leadership to return to Washington to debate & pass a comprehensive bill to address the negative effects of the coronavirus, so that the House may take it up. #AZ01 families cannot wait. https://t.co/JaUX3L92X9

Several of the candidates looking to replace do-nothing Republicans in the House and Senate also expressed their views:

“The U.S. gross domestic product fell at a 4.8 percent annual rate in the first quarter of the year. This was the worst quarterly contraction since 2008 when our country was in a deep recession. Many economists predicted that the second quarter was going to be worse. Now a good leader, especially one with so much business experience, should have sat down with these economists, not cronies, and planned how to care for our nation’s citizens and our economy during this COVID19 pandemic. But no. Our President wanted to open up the country; not listen to scientists to wear masks and social distance; leave it up to states to determine to wear a mask; leave states to fend for themselves to get resources/PPE; not have a national plan to protect and decrease the spread of this virus.”

“So now, in our second quarter, we have the biggest drop in our GDP of 9.5%, which is equivalent to around 32% annual rate of decline. This is the worst decline on record, ever. It may have been worse if it was not for the CARES Act that gave trillions of dollars in aid to Americans and businesses.”

“We are backsliding. There is no leadership, no cohesive plan. People’s confidence is waning. Millions of Americans are out of a job, losing the home they live in, can’t put food on the table, don’t know what to do. The expiration of unemployment benefits and fear of eviction from their rental or not being able to pay their mortgage is causing more stress with no hope. The only way to keep Americans and our nation above water are to continue paying stimulus money until we can get this virus under control and a vaccine. We must stop the bickering in Congress and think about the people. We cannot allow Congress to reduce or eliminate additional aid to our citizens or businesses or we will continue to have worse economic impacts. We are the United States of America. We are supposed to be the smartest and strongest country in the world. I don’t want congress to go home without coming to a compromise. They still get paid, they still have health insurance, and they won’t lose the roof over their head, and they can put food on the table. Millions of Americans don’t have that luxury. You better be thinking about that!”

Bills will continue to be a struggle as the virus continues to spread.

The economics are simple. To protect the economy from a greater fall, we need to give it a boost. Not trickle down, but in a way that actually works.

“As our country faces the worst economic downturn in history it is unconscionable that Congress refuses to unite in the development of an economic stimulus that reaches Americans in their homes and on the ground where it is most needed. This is the most dramatic and disturbing demonstration of how significantly money in politics harms Americans as partisan politicians continue to put appeasing special interest donors above the needs of everyday Americans. We need members of Congress who care about our country, our economy, and the millions of everyday people who are suffering as a result of this economic crisis. OK.”

“This isn't about not wanting to work. It's about wanting to survive." https://t.co/Kux66ojMmP

The State of the Union https://t.co/jqm1SHlr66

“Regarding our GDP, our country has for years relied on a hunting burden of debt to sustain a lifestyle we could not afford in building a wealthy class that has stolen our future. Now we need to elect a Liberal government that will install a liberal agenda and solve our countries greatest needs. The house of cards has fallen and we need a Congress that will address our issues.”

Even during a national crisis, Washington still can’t find ways to work together. And that’s hurting Arizonans.

Where are Arizona’s Republicans on this?

Governor “Fair Weather,” Doug Ducey said in his Thursday briefing that it is up to Congress to help Arizonans.

Senator “Where is” Martha McSally (the person who told cities and states they were on their own,) given an opportunity by Enemy of the People Mitch McConnell, to introduce an amendment to extend the enhanced unemployment benefits for just one week, had the nerve (via Twitter) to say:

“It’s disgraceful that the Senate could not meet in the middle & agree to extend expanded unemployment benefits for 7 days until Congress comes up with a long-term plan.”

Representative David “I cooked the books” Schweikert is actually the one that exhibited nerve the day he was being fined $50,000 for violating 11 House Ethics rules including those regarding campaign finance. He tweeted:

“I am very frustrated that Democratic leadership rejected the White House’s offers to extend enhanced federal unemployment insurance before expiring tonight. We have known this deadline was looming and should not delay a stand-alone extension for Americans who are hurting.”

Again, remember Democrats in the House passed their COVID 19 assistance measure in May while Schweikert’s Republicans in the Senate procrastinated until last week and then came up with quarter half tuchus measures.

The other members of the Republican Congressional Delegation (Debbie Lesko, Andy Biggs, and Paul Gosar) did not say anything which given McSally and Schweikert’s words, was probably the smartest thing to do.

Still, the people in Arizona need to know that their elected officials (Governor, Senators, Representatives, and State Legislators) will work for them and advance legislation that serves their interests and protects them.

The Democrats clearly have that agenda.

The former party of Lincoln does not.