At the close of counting ballots on Friday evening, Democrat Kyrsten Sinema has expanded her lead in the U.S. Senate race, Democrat Kathy Hoffman has expanded her lead in the Superintendent of Public Instruction race, Democrat Sandra Kennedy has now opened a slight lead for the second seat in the Arizona Corporation Commission race, and Democrat Katie Hobbs has significantly closed the gap in the Secretary of State race. When all the votes are finally counted, we may actually have some Democratic winners after all.  Count all the votes! And be prepared for a recount, or two. 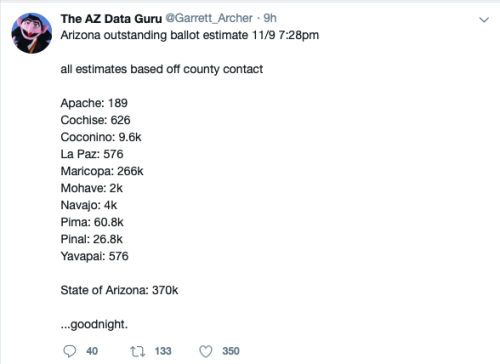 Kennedy leads by 1,602 for the second seat

Ballots will be counted until Wednesday, November 14. Stay tuned.

UPDATED: For Saturday numbers at 5:00 p.m, it does not appear all counties have posted yet. UPDATE: Later updates after posting from counties. 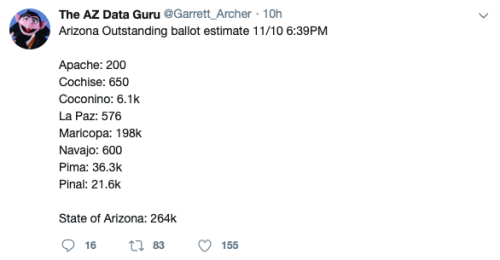 Surprise! Kennedy  has now surged into the lead for the first seat by 4,642 votes