Arizona’s angry old man, Senator John McCain, the armchair Neocon war monger who advocates for wars from his perch on the set of the Sunday morning bobblehead shows, and is a critic of anyone who disagrees with his alleged “genius” in matters of war and foreign policy — Senator “Surge” has always been wrong, about everything — got his comeuppance on Tuesday. Kerry And McCain Swap Teddy Roosevelt-Themed Insults:

Things got heated between Sen. John McCain (R-AZ) and Secretary of State John Kerry at a Senate hearing on Tuesday that featured dueling Teddy Roosevelt quotes.

First, McCain blasted Kerry for taking what he considers tepid measures against Russia.

“My hero Teddy Roosevelt used to say talk softly and carry a big stick,” McCain said. “What you’re doing is talking strongly and carrying a very small sick. In fact, a twig.”

When it was his turn to speak, Kerry took issue with the Arizona senator’s pessimistic outlook on negotiations over Iran’s nuclear program.

“We’re talking! The option is, you go to war,” Kerry said. “A lot of people are ready to drop bombs all the time. We can do that. We have the ability.”

Later, it was Kerry’s turn to offer his own T.R.-themed burn.

…. said Secretary Kerry to the perpetual critic of  the Sunday morning bobblehead shows. 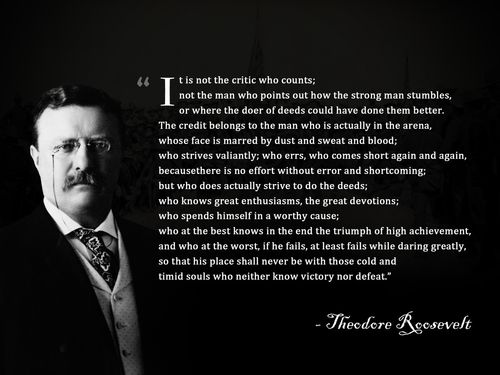