The Arizona Constitution, Article 2, sets forth a Declaration of Rights, among them: 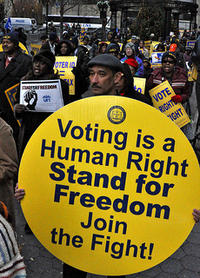 Section 2 Political Power; Purpose of Government. All political power is inherent in the people, and governments derive their just powers from the consent of the governed, and are established to protect and maintain individual rights.

Section 21 Free and Equal Elections. All elections shall be free and equal, and no power, civil or military, shall at any time interfere to prevent the free exercise of the right of suffrage.

The Arizona Courts have always applied the lowest standard of “rational basis review” rather than the highest standard of “strict scrutiny” review of state action. This is why I have advocated for a constitutional amendment that expressly provides that the right to the franchise to vote cannot be infringed by the state, without due process of law.

States that have such a constitutional provision in the state constitution do not have to endure the attempts at voter suppression that we have here in Arizona.

On Wednesday, the Arkansas Supreme Court struck down that state’s voter ID law as violating the Arkansas state constitution. You can read the Opinion HERE (.pdf).

The Arkansas Supreme Court has rejected a state law requiring voters to show identification when they vote.

In an opinion issued Wednesday afternoon (PDF), the court unanimously affirmed a Pulaski County circuit court judge who ruled the law was unconstitutional.

Associate Justice Donald Corbin wrote that the law’s “added requirement of providing a proof of identity as a prerequisite to voting runs afoul of” the Arkansas Constitution, which “plainly states” a person who is an Arkansas resident, at least 18, registered to vote and a U.S. Citizen can cast a ballot.

“These four qualifications set forth in our state’s constitution simply do not include any proof-of-identity requirement,” he wrote.

In a concurring opinion, Associate Justice Courtney Hudson Goodson said the high court didn’t need to even determine whether the act was constitutional on its face because an amendment to the state constitution requires legislators to get a two-thirds majority to pass such a law. It fell short of that when the act passed last year.

“Because the Act failed to obtain a two-thirds vote, it is invalid,” Goodson wrote. “As a consequence, it is wholly unnecessary to decide whether the Act added a new qualification to voting as prohibited by” the Arkansas constitution.”

Legislators last year passed the law requiring voters to show photo ID at the polls and then overrode a veto from Gov. Mike Beebe.

The opinion from the state’s high court comes less than a week before early voting, which starts Monday, and less than three weeks before Election Day on Nov. 4.