The recent surge in refugees seeking asylum along the U.S.-Mexico border is falsely portrayed by right-wing media like the Washington Examiner as Border shock: 50% surge in gang members, 650,000 illegal immigrants will be freed into US in 2019. This kind of racist anti-immigrant fear mongering is repeated by racist white nationalists like Tucker Carlson and Laura Ingraham on Fox News aka Trump TV, and is then parroted back by our racist white nationalist Twitter-troll-in-chief.

What’s almost entirely missing from American media coverage about this surge in refugees seeking asylum is what is actually driving many of them to migrate. The World Bank warned in March 2018 that 143 Million People May Soon Become Climate Migrants:

Most of this population shift will take place in Sub-Saharan Africa, South Asia, and Latin America—three “hot spots” that represent 55 percent of the developing world’s populations.

This worst-case scenario is part of a ground-breaking study focused on the impacts of slow-onset climate, as opposed to more visibly dramatic events such as extreme storms and flooding. The report, Groundswell—Preparing for Internal Climate Migration, also shifts the focus from cross-border migration, which has drawn global attention as refugees and migrants flee war, poverty and oppression, to in-country migration, which involves many more millions of people on the move in search of viable places to live. The 143 million represent 2.8 percent of the three regions’ population.

What we are witnessing is Migration, Forced by Climate Change:

Climate change is a game changer: glaciers melt, sea levels rise, weather patterns become unpredictable. Then add the anticipated secondary effects, such as crop failure, the salinization of freshwater, and the flooding of coastal cities. With all of this disruption, massive movements of people across the globe in coming years are sure to happen, as the people affected look for new homes. “More and more people will be displaced because of climate change,” says María Cristina García, History. “The question is this: Can we come up with some kind of legal mechanism in the United States and internationally that addresses what promises to be a significant problem?”

García is exploring that question in her latest book project, Climate Refugees: The Environmental Origins of Refugee Migrations, which looks at environmentally driven migrants. “People have been displaced by climate for millennia,” García says, “but we are now at a particular historical moment, facing a new type of environmentally driven migration that will be more fast and furious. It will require incredible adaptability and political will to keep up with the changes that are forecasted to happen.”

García is especially concerned about climate refugees because they do not fall under the current definition of refugee. “The term refugee is defined very precisely in international law,” she explains. “In U.S. law, for example, refugees are defined as individuals persecuted because of race, religion, nationality, membership in a particular group, or political opinion. Nowhere does climate figure into it. It leaves this entire group of people without international protection or recognition. I’ve seen projections that put the number of people who will be displaced by climate change as high as 200 million by mid-century, so the international community will have to come up with creative solutions to address the problems generated by internally displaced populations and mass migrations.”

A severe drought has ravaged crops in Central America and as many as 2.81 million people are struggling to feed themselves, the United Nations World Food Programme (WFP) said on Friday, though the region’s coffee crop has been largely unscathed.

The drought, which is also affecting South America, has been particularly hard on the so-called “dry corridor” of Central America, which includes southern Guatemala, northern Honduras and western El Salvador.

A majority of the migrants we see on the news, traveling through Mexico to the U.S., are from Honduras, joined by large numbers from El Salvador and Guatemala. These three countries occupy what’s known as the Central American Dry Corridor, and are particularly vulnerable to changes in climate, especially precipitation. The Climate Reality Project explains How The Climate Crisis Is Driving Central American Migration:

So what is the Central American Dry Corridor? And what is happening there? 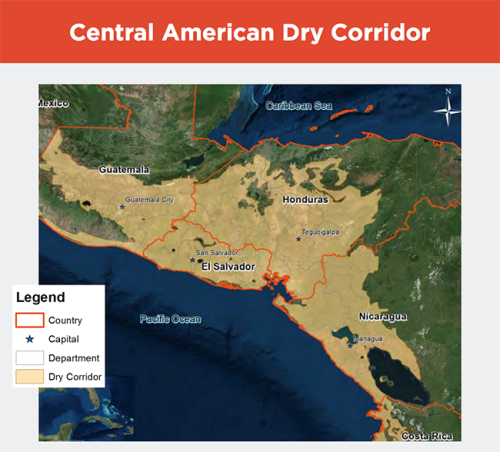 The Dry Corridor is an ecological region on the Central American Pacific coast that runs from far southern Mexico through Guatemala, El Salvador, Honduras, Nicaragua, Costa Rica, and Panama. This region has been experiencing severe droughts and floods – all exacerbated by the climate crisis – that threaten the physical, financial, and mental well-being of the people who live there.

Why is this region so susceptible to extreme weather events? It has to do with changing atmosphere-ocean circulation patterns near Central America. One of these is the El Niño Southern Oscillation, which makes the region particularly vulnerable to irregular rainfall, resulting in both droughts and flooding, which are becoming ever-more extreme because of our changing global climate.

More extreme weather has become a major issue with respect to economic opportunities and food security. More than 30 percent of jobs in El Salvador, Guatemala, and Honduras are in agriculture. So changes in climate trends and increasingly frequent and intense extreme weather events hit residents of these countries especially hard.

The latter half of 2018 brought a drought to the Dry Corridor that affected over 77,000 corn farmers in El Salvador and more than 65,000 families in Honduras.  The UN Food and Agriculture Organization (FAO) and the UN World Food Programme expressed concern that “total or partial loss of crops means that subsistence farmers and their families will not have enough food to eat or sell in coming months.”

Before this most recent extreme dry spell, the countries in the Dry Corridor faced another severe drought that began in 2014 and continued through 2017, resulting in the loss of crops and death of thousands of cattle, which put 2.5 million people at risk of food insecurity.

Just to repeat, that’s 2.5 million people at risk of going hungry. Thanks in no small part to the climate crisis.

In this region, agricultural employment opportunities are concentrated in rural areas where residents already face elevated levels of poverty and food insecurity. In Honduras and Guatemala, rural poverty rates are around 82 percent and 77 percent respectively.

Due to changes in the climate in the Dry Corridor and a lack of alternative economic opportunities, people are leaving their rural communities and heading for areas they hope are more economically prosperous.

Rural migrants in Central America often travel first to urban areas within their own countries. But once they arrive in the cities, they frequently encounter systemic issues from corruption to violence, including especially high rates of gender-based violence.

The migrants then leave these urban areas too, and begin to migrate internationally, mostly to Mexico or further north to the US. The decision to migrate is unique to each person’s experience, and therefore, it’s difficult to say exactly which factor – climate change and its impact on rural agriculture, violence and insecurity in the cities, a little bit of both, or another factor altogether – ultimately pushed them to leave their home countries.

Nonetheless, it is important to recognize that many migrants’ emigration began when they no longer had anything to eat – and that is significantly influenced by the climate crisis.

Note: I highly recommend that you read Nicholas Kristof’s excellent opinion, ‘Food Doesn’t Grow Here Anymore. That’s Why I Would Send My Son North.’, in which he allows these “climate refugees” to tell their stories in their own words.

WHAT CAN WE DO TO HELP?

A good place to start would be in the programs set forth in the UN’s Global Compact for Safe, Orderly, and Regular Migration, as well as in the work of other multinational entities like the UN Food and Agriculture Organization or the Inter-American Institute for Cooperation on Agriculture.

In December 2018, the UN adopted its first comprehensive compact on migration: The Global Compact for Safe, Orderly, and Regular Migration. The Compact sets forth guiding principles for parties to consider regarding their domestic and international migration policies, as well as 23 objectives that detail the steps that need to be taken in order to create better conditions for migrants across the world.

(The US voted against the Compact, however, stating that it does not align with its sovereignty over migration policy.)

No matter what, it’s clear we need a more humanitarian approach toward receiving and adapting policy for climate migrants like those that have been arriving at the southern border of the US.

We understand that migration policy is extremely complicated, but anyone can see that policies like separating families and detaining children are not humane, and that we can do more to support these migrants.

There is also room to improve the facilitation of information-sharing, collaboration, and implementation of programs in the Dry Corridor that will help farmers there adapt to a changing climate.

Our final suggestion is to address the root of the problem: We need to work together to reduce fossil fuel emissions in the US and around the world. Contrary to what some may say on television, many people don’t want to leave their homes. If we solve the climate crisis, we take away one of the great catalysts for migration – in Central America and around the world.

Scott Weinberg is Gone, But the Threat of Purple For Parents Remains