The Bureau of Labor Statistics reported this morning that the U.S. economy added 156,000 jobs in August, which is down from June and July totals, and fell short of expectations. The unemployment rate, while still low, inched up a little to 4.4%. 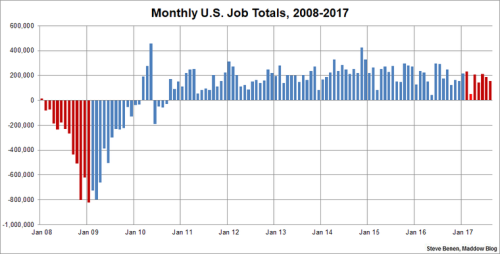 In fact, overall, this is not a heartening set of data. The revisions for June and July were both lower, and combined they show a net loss of about 41,000 jobs. (In case you’re curious, the BLS report explained at the outset, “Hurricane Harvey had no discernible effect on the employment and unemployment data for August.”) 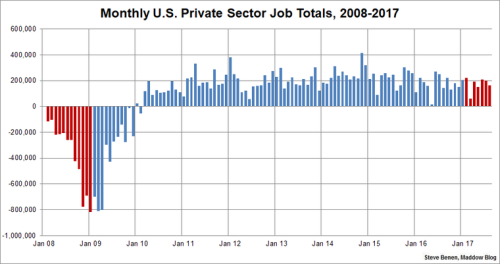 One of the numbers that jumps out is retail trade, which added only 800 jobs in August. This reflects the massive transformation of the retail sector underway from automation and computerization, especially e-commerce.

Here is something to consider from Axios.com. Expert doubles down: robots still threaten 47% of U.S. jobs:

A leading authority on robotization has doubled down on his most controversial forecast — that automation threatens 47% of American jobs. And he belittles critics who say technological upheaval seems scary but always generates sufficient new work.

Why it matters: In a new report by Citi, Carl Frey, a professor at Oxford University, also forecasts the demise of American retail work. If he is right, it is an outcome that will reach further than the decimation of manufacturing because it will involve a different, large set of cities.

Frey writes in the Citi report:

More than anyone, Frey and artificial intelligence expert Michael Osborne ignited the current fear of a robot apocalypse with a joint 2013 paper that introduced their famous 47% forecast. Critics have attacked the core of their work. The most frequent pitch I receive is from PR agents offering yet another expert rejecting robot-induced mass unemployment. Their scorn has two main assertions:

In the Citi report, Frey quotes his critics and rejects their arguments. He writes:

E-commerce’s reach is patchy across the globe:

This may soon change with e-commerce giant Amazon’s purchase of Whole Foods, which has already caused panic among major grocers. Amazon Cuts Whole Foods Prices as Much as 43% on First Day:

Amazon.com Inc. spent its first day as the owner of a brick-and-mortar grocery chain cutting prices at Whole Foods Market as much as 43 percent.

In a sign of how the retailer is changing, the Amazon Echo, a voice-activated electronic assistant, was also for sale, for $99.99 — a sharp pivot into electronics for a company known for kale and quinoa. The Echo Dot, a smaller version, was advertised for $44.99.

The wedding between Amazon and the upscale grocery promises to upend the way customers shop for groceries. Cutting prices at the chain with such an entrenched reputation for high cost that its nickname is Whole Paycheck is a sign that Amazon is serious about taking on competitors such as Wal-Mart Stores Inc., Kroger Co. and Costco Wholesale Corp.

“Price was the largest barrier to Whole Foods’ customers,” said Mark Baum, a senior vice president at the Food Marketing Institute, an industry group. “Amazon has demonstrated that it is willing to invest to dominate the categories that it decides to compete in. Food retailers of all sizes need to look really hard at their pricing strategies, and maybe find some funding sources to build a war chest.”

Some rivals have already reacted to the kickoff of what could become a new era of selling food in the U.S.

Wal-Mart, the world’s biggest retailer, has already invested billions into lowering prices across the board over the past year or so, and has revamped the produce section at its U.S stores, improving sight lines, adding more fresh-cut fruits and even creating a sweeter bespoke cantaloupe. That, along with an aggressive rollout of curbside grocery order pickup, helped the company record its best food sales growth in five years in its most recent quarter.

Costco, meanwhile, has a full slate of organic items that are priced about 30 percent cheaper than the same products at Whole Foods, according to Sanford Bernstein. It’s able to price lower thanks to a business model that charges membership fees, focuses on selling a limited assortment of bulk-sized goods and features a treasure-hunt experience in the stores.

Maarten van Tartwijk, a spokesman for Ahold Delhaize, the Dutch retailer that owns the Stop & Shop chain in the U.S., said the company has invested heavily in its online operation. And Germany-based retailers Aldi Stores Ltd. and Lidl, touting lower prices, continue to expand in the U.S.

After falling 37 percent this year on disappointing sales and investor concern over the Amazon-Whole Foods union, Kroger stayed essentially unchanged on Monday in New York.

Sprouts Farmers Market Inc., an upscale grocer that competes with Whole Foods and is cited by analysts as a possible consolidation target, decreased about 10 percent. Shares of Wal-Mart fell 0.8 percent and Target Corp. was down about 1 percent. Costco increased less than 1 percent. Amazon shares rose 0.08 percent.

“Goodbye, Whole Foods as we know it,” Karen Short, an analyst at Barclays Capital Inc. in New York, said in a note. “The conventional supermarket has not evolved much in decades. But Amazon will likely drive drastically different shopping behavior in grocery. The survival of the fittest has begun.”

The “mom & pop” corner grocer that many of you may have been familiar with? Yeah, they may soon  be history, like the horse and buggy.

The moral rot of the GOP: it has become a fringe conspiracy QAnon Party

Donald Trump and his Postmaster General are sabotaging the USPS, a crime in progress

What are these School Board Members thinking? It is not safe...