The August jobs report was slightly below economists expectations, but based upon the trend of earlier months being revised upwards with each report as more data becomes available, it is likely the August jobs report will be revised upward in future reports. The U.S. economy added 173,000 jobs in August, and the overall unemployment rate dropped to 5.1%, which is the lowest point since April 2008.

I would not read China’s economic slowdown into the August jobs report, although it does portend to affect the U.S. economy with declining Chinese demand for U.S. products in coming months.

The volatile U.S. stock markets are not the economy — this represents a long overdue market correction, How A Single Country Fueled The U.S. Market Correction — “with the strong economic fundamentals we’ve seen, including continued positive economic performance here in the U.S., the Fed’s continued stimulative policy, low oil prices, and better-than-expected corporate earnings.” Most of what you are seeing is Chicken Little speculation over the FED raising interest rates, and genuine concern over the global economy.

Pro Tip: It’s time to do away with the GOP automatic budget sequester and “austerity economics” — even the European Central Bank has reversed its slavish devotion to austerity economics and has embarked on a new stimulus program, ECB Bets Big on Stimulus — it’s time for the U.S. to go big on infrastructure development while interest rates are still at historic lows. We would be foolish not to.

The new report from Bureau of Labor Statistics shows the U.S. economy added 173,000 jobs in August, a little below expectations. The overall unemployment rate ticked lower to 5.1%, which is the lowest point since April 2008, more than seven years ago. 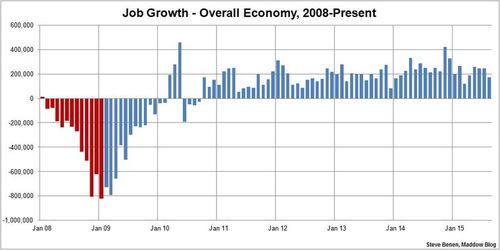 This is one of those job reports that looks a little discouraging at first blush, but the details paints a more encouraging picture. The revisions, for example, also point in a fairly encouraging direction: June’s job totals were revised up, from 231,000 to 245,000, while July’s numbers were also revised up, from 215,000 to 245,000. Combined, that’s an additional 44,000 previously unreported jobs. The same report also showed a decent increase in wages.

Even the drop in the jobless rate is for the right reasons. As the New York Times’ Neil Irwin noted, the latest drop is the result of fewer unemployed Americans, more employed Americans, a slightly higher employment-to population rate.