The Party of Trump fka the Republican Party has completed its dark descent into authoritarian fascism in Arizona. True American patriots must resist these fascist Vichy Republicans.

Laurie Roberts of The Republic reports, Senate Republicans figure a new way to get their hands on Maricopa County’s ballots:

Republican senators, having been thwarted in their efforts to arrest the Maricopa County Board of Supervisors, have dreamed up a new plan for how to get their hands on the county’s ballots from the November election.

Simply pass a law declaring that laws don’t apply to them.

Senate Bill 1408 [Warren Peterson] is breathtaking in its arrogance:

“The Legislature’s plenary authority to conduct an investigation on any matter may not be infringed on by any other law,” it says.

That’s almost as stunning as Rep. Shawnna Bolick’s bill, the one that declares the Legislature has plenary — or absolute — power to veto our vote for president.

If these Authoritarian Rethuglicans can declare themselves to be above the law, and that they get to decide who won an election regardless of how the people voted – why even hold an election? – we no longer have American democracy in Arizona. We have an authoritarian fascist dictatorship. Who will be their “Dear Leader”? Not Governor Doug Ducey, whom they censured last month for certifying election results. They will have to choose a Prefect for Arizona amongst themselves. Who are the leaders of this fascist putsch in the legislature? Arizonans have a right to know.

This bill says our leaders can investigate anything or, presumably, anyone and never mind any stinking laws that may stand their way. It cleared the Senate Judiciary Committee on a partyline 5-3 vote.

Have these people lost their minds?

Yes, and they’ve lost their souls as well.

Republican madness is boiling over ballots

Senate Republicans have been boiling mad since the Maricopa County Board of Supervisors thwarted their efforts to conduct their own audit to root out the ever-elusive fraud that supposedly allowed Joe Biden to win Arizona. This, despite repeated assurances by the county’s Repubican leadership that Biden won, fair and square.

But the pot boiled right over earlier this week when Republican Sen. Paul Boyer refused to go along with his colleagues’ ridiculous threat to slap handcuffs on the supervisors. 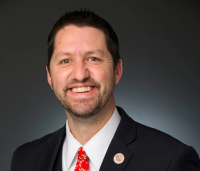 “If I voted yes on SR 1005, it would not get us any closer to our goal in validating that our elections process is fair and secure because the dispute isn’t whether or not the Maricopa County Board of Supervisors wants to hand over these ballots but whether or not the law allows them to,” he said. “Only the courts can determine this.”

The county has refused to turn over the ballots and tabulation machinery, contending that the Senate has no authority to see the ballots or audit the election.

In fact, ARS 16-624, says the ballots must be sealed after the canvass of the election is complete, unless a judge orders them to be opened.

The county is asking a judge to block the Senate’s subpoena.

So, basically, the law shouldn’t apply?

Rather than allowing the courts to sort out the issue, however, Senate Republicans already are planning an end run.

SB 1408 – in addition to declaring that laws don’t apply when the Legislature wants to investigate – specifically says all county election equipment, systems and records “are subject to subpoena and must be produced”. The bill, if passed, would be retroactive to Dec. 31, 2019.

“This can resolve our pending litigation and can give the county comfort in handing over what we know they can already do,” Sen. Warren Petersen, R-Gilbert, the bill’s sponsor, told the Senate Judiciary Committee on Thursday.

One might wonder why such a bill would be needed given Senate Republicans’ insistence that they already have the authority to examine the county’s 2.1 million ballots.

Warren called it an “insurance policy”, in case the courts side with the county.

“If they come out and say the law doesn’t allow it, this makes sure that it does.”

In other words, laws don’t apply. Not when you can just change them.

This is a full-throated rejection of separation of powers, and eviscerates the third branch of government, the judiciary, of its power to decide what is constitutional and/or legal. The legislative branch is seizing those powers unto itself. It is also trying to seize the powers of the executive branch. Measures to clip Arizona gov’s emergency powers are advanced by GOP legislators. These GQP legislators are acting like a criminal gang.

These radicalized authoritarian Rethuglicans are out of control, and are a threat to democracy. They are no different than the violent Trump terrorists who seiged our nation’s Capitol on January 6. They all need to be removed from office, and disgraced for all time in history.