I have often wondered why anyone in their right mind would ever want to be a patient of Doctor Kelli Ward, D.O. (yes, she is an actual doctor), former state senator and Chair of the Arizona Republican Party. She is frequently one of the most extremely offensive and outrageous of the far-right Tea Party yahoos in Arizona, espousing wild conspiracy theories and utter inane nonsense. How the hell did someone like her ever make it through med school? 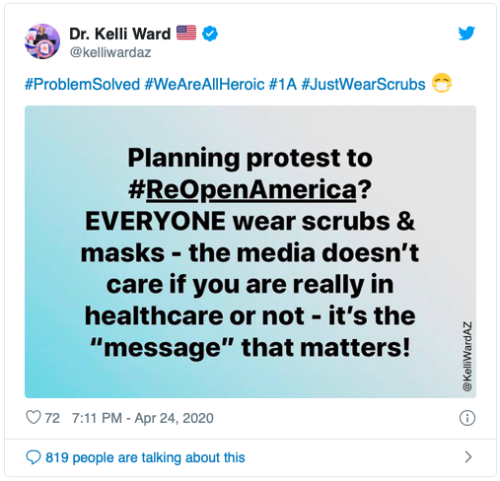 As protesters have staged rallies in various state capitols, demanding that the governors open businesses back up amid the coronavirus pandemic, images of health care workers counter-protesting them have gone viral.

This is the photo that has Ward’s knickers in a knot. ‘That’s the one there’: A photo of a protesting nurse in Phoenix goes viral. 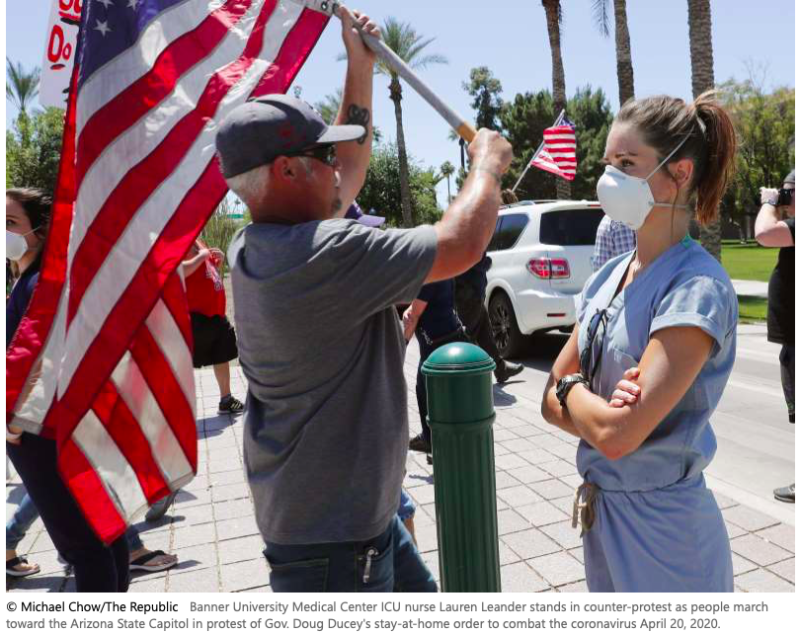 Meet the ICU nurse who silently stood in protest at a rally to reopen Arizona.

The state’s Democratic party ridiculed Ward in a statement.

“If anyone’s status as a health care professional should be questioned it’s Dr. Kelli Ward’s, considering her unwillingness to promote the advice of health experts,” said Matt Grodsky, spokesman for the party. “Irresponsible, shameful tweets like this do nothing to help people afflicted with the virus or the health care heroes who are working to save lives.”

Ward is a doctor of osteopathic medicine.

Earlier last week, Ward also falsely accused the counter-protesting health care workers of being phonies. But even if they are real doctors and nurses, she said, “when they appeared at rallies they were actors playing parts.” She hashtagged that tweet with “Propaganda” and “FakeOutrage.”

Ward has long been a practitioner of propaganda and fake outrage. This is a classic case of psychological projection.

Even before the COVID-19 epidemic, Ward was no stranger to half-baked conspiracy theories.

Previously a state senator who mounted multiple unsuccessful U.S. senatorial runs, she in 2014 entertained some constituents’ tinfoil-hat idea that the jet streams from airplanes are actually clouds of chemical agents deployed by the government to alter the weather and harm people’s health.

It was Senate Majority Leader Mitch McConnell’s allied super PAC that launched an ad blasting Kelli Ward as “Chemtrail Kelli” to protect her primary opponent, Sen. Jeff Flake (R-AZ), amid concerns that President Trump could side with her over the incumbent senator. McConnell allies blast Flake opponent in new ‘Chemtrail Kelli’ ad.

Proving that there is no honor among thieves or right-wing Republicans, the fact checkers all say No, Kelli Ward isn’t a chemtrails conspiracy theorist – PolitiFact. Nevertheless, the monicker “Chemtrail Kelli” has stuck to Ward like glue.

More recently, in her attempt to dethrone the late Sen. John McCain (R-AZ) in 2018, there was no end to the bizarre vitriol she spewed.

From accusing him of arming the people who harbored Osama Bin Laden to ending his cancer treatment just to undercut her primary campaign, Ward left no specious stone unturned.

These days, she’s been devoting her time and Twitter feed to bashing the media and insisting that the country be reopened.

Arizona Gov. Doug Ducey’s (R) stay-at-home order is scheduled to expire on April 30. He’s been less aggressive than some GOP governors in his efforts to reopen the state, only definitively green-lighting elective surgeries on May 1. He said that he’s still looking at the data to determine whether he’ll extend the stay-at-home order, or start relaxing some of the restrictions.

The University of Washington’s IHME model — similar to the data the White House has been using — predicts that Arizona is only two days past its peak daily COVID-caused deaths.

Kelli Ward and her “spread the virus” protestors are a very small minority who are receiving unwarranted attention from the media only because Fox News Is Desperately Trying to Turn Coronavirus Protests Into the Next Tea Party (excerpt):

In tandem with Donald Trump, Fox News hosts and other influential conservatives spent the weekend egging on a small number of mask-less protesters flouting social distancing guidelines by crowding state capitols and demanding that closure orders be lifted.

[These protestors] represent the opinions of a decided minority: A Politico–Morning Consult poll released last week found that 81% of Americans support maintaining social distancing measures “for as long as is needed to curb the spread of coronavirus, even if it means continued damage to the economy,” while nearly 60% of respondents in a similar NBC–Wall Street Journal survey voiced concerns over the U.S. lifting mitigation efforts too soon. But perhaps out of wishful thinking, members of the right-wing media are nonetheless framing protests as the Tea Party movement reincarnated.

The same Tea Party assholes who objected to Americans getting access to affordable health care in 2010, now want the “freedom” to spread the coronavirus to people who do not share their Trump death cult devotion. Still the same old assholes.