Rep. John Fillmore, R-Apache Junction, has sponsored a bill to mandate reciting the Pledge of Allegiance in grades K-4 in Arizona’s schools.

Do you know who really should be made to recite the pledge of allegiance? The Sedition Party MAGA insurrectionists who tried to overthrow the democratically elected government of the United States to install a GQP authoritarian banana republic under Donald Trump. What message do you think the January 6 insurrection sent to school children in grades K-4, hell to all Americans on that awful day? 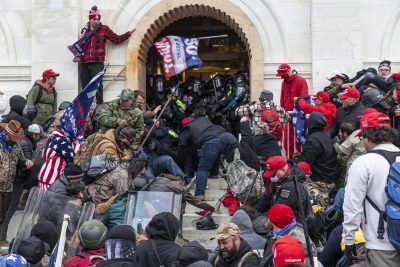 Apparently Arizona’s Civics classes do not teach the U.S. Supreme Court decision in West Virginia v. Barnette (1943): The freedom to not pledge allegiance:

The case, West Virginia State Board of Education v. Barnette, was decided in the shadow of a dispute from three years earlier. Both cases involved members of the Jehovah’s Witnesses, a religion that calls them to not pledge to any symbol or object. The sect’s U.S. leader, Joseph Rutherford, required that followers renounce the Pledge of Allegiance to the U.S. flag, which sources say came from the contemporaneous annihilation of dissident Jehovah’s Witnesses in Nazi Germany for similar offenses against the Nazi flag.

In the earlier 1940 case of Minersville School District v. Gobitis, children Lillian and William Gobitas (the Court spelled their name incorrectly) were expelled from a Pennsylvania public school for not participating in the Pledge. When brought to the court, Justice Felix Frankfurter wrote the majority opinion. He concluded that freedom of religion and speech, along with the right to due process, do not apply to the promotion of “political responsibilities.” Specifically, he wrote, “The mere possession of religious convictions which contradict the relevant concerns of a political society does not relieve the citizen from the discharge of political responsibilities.”

[T]he question remains whether school children, like the Gobitis children, must be excused from conduct required of all the other children in the promotion of national cohesion. We are dealing with an interest inferior to none in the hierarchy of legal values. National unity is the basis of national security. To deny the legislature the right to select appropriate means for its attainment presents a totally different order of problem from that of the propriety of subordinating the possible ugliness of littered streets to the free expression of opinion through distribution of handbills.

After the 8-1 Minersville decision, in which Justice Harlan Fiske Stone was the sole dissenter, states had the authority to force children to participate in the Pledge. The Court maintained for only three years that “national cohesion” was of higher interest than one’s personal beliefs.

Jackson emphasizes that free expression overrides the goal of national unity. A compulsory flag pledge goes against the fundamental values of the First Amendment, which protects freedom of expression and thought from government intrusion in all but the most extreme cases. He concludes his opinion with a stirring reflection on the dangers of forced “unity” and the importance of individual liberty:

The case is made difficult not because the principles of its decision are obscure, but because the flag involved is our own. Nevertheless, we apply the limitations of the Constitution with no fear that freedom to be intellectually and spiritually diverse or even contrary will disintegrate the social organization. … [F]reedom to differ is not limited to things that do not matter much. That would be a mere shadow of freedom. The test of its substance is the right to differ as to things that touch the heart of the existing order.

If there is any fixed star in our constitutional constellation, it is that no official, high or petty, can prescribe what shall be orthodox in politics, nationalism, religion, or other matters of opinion, or force citizens to confess by word or act their faith therein. If there are any circumstances which permit an exception, they do not now occur to us.

It has been 78 years since West Virginia State Board of Education v. Barnette, it has been the law for all of John Fillmore’s 69 years. Clearly, he must have failed Civics class.

The way Rep. John Fillmore sees it, young children need to hear and say the Pledge of Allegiance every morning at school.

So he convinced Republican members of the House Government and Elections Committee on Wednesday that it should be mandated for anyone in kindergarten through fourth grade.

The 7-6 vote sends the measure to the full House.

Was there not a legal opinion from House counsel on this bill? Or did these Republicans just ignore that legal opinion, as they usually to do?

The Apache Junction Republican said the pledge’s components are important, ranging from the “I” declaration, which makes it personal, to pledging to “the United States, that’s all of the states.”

“I think that it’s important that we have the kids learn what these words mean and drummed into their heads,” he said. “America is a country where people are still dying to come to and they put their lives at risk to come here.”

For older students, those in grades 5 through 12, there would be no pledge requirement. Instead, Fillmore’s House Bill 2060 would require at least a minute a day for students to “engage in quiet reflection and moral reasoning.” [See Justice Jackson, above].

Fillmore said he wants that language rather than simply a moment of silence.

“Sometimes the moment of silence is ‘shut up and keep quiet’ versus ‘think about what is good for society or yourself or your family, and for your parents and for your country and community,’” he said. “Even if they only think about what they’re facing that day or the trials and tribulations in their little lives, I think (for) them to have that ability to have some kind of reasoning is a good thing.”

The idea of a daily pledge, weaved into state law, troubled Rep. Stephanie Stahl Hamilton, D-Tucson. She pointed out that among some religious groups the only pledge they are allowed to make is to God.

Hey! Someone who is actually familiar with West Virginia State Board of Education v. Barnette.

Fillmore noted his measure does permit parents to excuse their children from the requirement. But that didn’t satisfy Rep. Athena Salman, D-Tempe. She said sometimes children don’t have the same religious beliefs as their parents.

“The student as an individual has rights,” Salman said. “And to force a student to have to rely on their parents in order for them to have their constitutional rights protected I think is a big loophole that could potentially violate the individual student’s religious beliefs that might digress from what the parents believe.”

Can a student take a knee during the pledge in expression of individual rights, like Colin Kaepernick, or does Fillmore want to regulate that speech also?

Tory Roberg, lobbyist for the Secular Coalition of Arizona, went a step further. She suggested anything that pressures students to recite the pledge, with its language about the country being “one nation under God,” could amount to illegal religious coercion.

True Fact: How ‘One Nation’ Didn’t Become ‘Under God’ Until The ’50s Religious Revival: In the original Pledge of Allegiance, Francis Bellamy made no mention of God. Bellamy was a Christian socialist, a Baptist who believed in the separation of church and state.

It started with a proposal by the Knights of Columbus, the Catholic lay organization, to add the phrase ‘under God’ to the Pledge of Allegiance, before President Dwight Eisenhower seized on it.

It was meant to be a response to the “godless Communists” of the Soviet Union, at the height of the Cold War.

The phrase “under God” was incorporated into the Pledge of Allegiance on June 14, 1954, by a Joint Resolution of Congress amending § 4 of the Flag Code enacted in 1942.

Maybe Arizona’s Civics classes should teach the history of the Pledge of Allegiance.

Rep. Kevin Payne, R-Peoria, said he was “amazed” at how many people had registered at the legislative website as opposed to the measure.

Payne pointed out that lawmakers begin each session with the same pledge.

I would refer Rep. Kevin Payne, R-Peoria to my comments about the Sedition Party MAGA insurrectionists at the top of this post. I thought we were in America, too. This guy lacks any self awareness.

She contends the measure violates that document.

Howard Fischer, who is not a lawyer, then veers off on a tangent which demonstrates that he should not pretend to be a lawyer in his reporting.