Thursday was a red letter day for the state of Arizona. The Arizona House debated — at length— three competing bills on distracted driving and texting while driving.

Many family members, who lost loved ones to texting while driving, were in the gallery for this historic day. The family of Officer Clayton Townsend, who was killed in January by a distracted driver, played a pivotal role in getting the legislation passed. Former State Senator Steve Farley had proposed texting while driving bans every year for more than 10 years, but the Republicans wouldn’t hear the bills.

The Democrats backed the clean texting while driving bill (HB2318) proposed by Rep. Noel Campbell. He worked with Rep. Cesar Chavez (who had had a texting bill that died in committee) to bring this bipartisan bill forward. 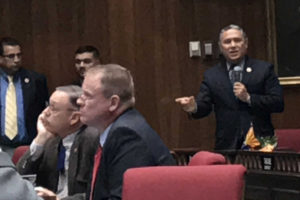 Rep. Diego Rodriquez gave an impassioned speech about the entrapment and profiling that could occur with SB1141, the Mesnard bill.

The Democrats voted “no” on two of the three bills. The Mesnard bill (1141) was way too broad and included many different activities that could be construed as distracted driving– eating, petting your dog, reaching for something, etc. The Democrats were concerned that this would impinge upon peoples’ civil rights and lead to racial profiling. (Because of our principled stance, the Republicans dubbed us the “Perfection Caucus.” Aren’t they the Perfection Caucus since ~90% or more of the bills that make it through the process are their bills, even though we Dems make up 48% of the House?) 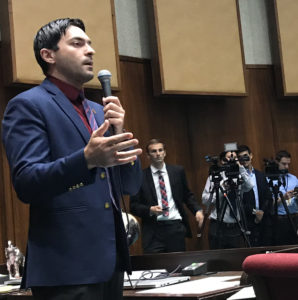 Rep. Leo Biasiucci argued in favor of the preemption amendment to SB1165, which would make texting while driving a secondary offence, give people points on their license, and require driving school.

Bother the Mesnard and Campbell bills passed and were sent to the governor.

This will save lives. Arizona is one of the last states to pass this ban.