Manhattan District Attorney Cy Vance, who is prosecuting Donald Trump for tax and bank fraud, is considering bringing a case against Steve Bannon, whom he indicted for federal tax fraud in August and who was pardoned by Trump on his last night in office.

Trump frantically deliberated over whether to issue Bannon a pardon, which could be risky, because Bannon knows what led up to the insurrection.

Trump ignored his lawyers’ advice and pardoned Bannon before he served any jail time, after a phone call between the two men.

The pardon is said to cover just Bannon’s indictment for defrauding gullible border wall donors of hundreds of thousands of dollars. The donations went to supporting Bannon and his three associates’ lavish lifestyles.

Bannon and his collaborators “raised more than $25 million in an online crowdfunding push while promising donors that all the proceeds would go to supporting the wall’s construction, according to federal prosecutors,” writes Shayna Jacobs.

“Bannon had been free on a $4 million bond,” Jacobs writes. “As he left the courthouse after his arraignment, he ripped off a pandemic mask and told reporters that the ‘entire fiasco is to stop people who want to build the wall.”

All four men pleaded not guilty to conspiracy to commit wire fraud and money-laundering charges. Bannon’s next court date is February 22. The other men, who did not receive pardons, have court dates later in the year. 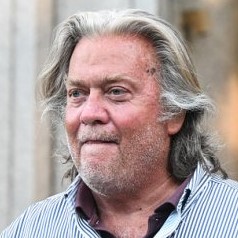 Will Bannon, now posing as an obese hobo, continue to lie?

An Admission of Guilt

Bannon will be asked at his February 22 hearing whether he’ll accept Trump’s pardon, which means admitting his guilt and cooperating with New York prosecutors. Trump must have thought of this scenario before he finally relented and pardoned Bannon just hours before his powers vanished.

“More than a century ago, the Supreme Court explained that for a presidential pardon to be effective, it must be “accepted” by the person offered the pardon.

“Significantly, as Chief Justice John Marshall wrote in 1833, the decision to accept a pardon is an admission of guilt.

“No doubt, Bannon has highly important testimony about the alleged scheme,” Martin and Lacovara write.

“Since acceptance of the pardon would protect Bannon from federal prosecution, the US attorney may well decide to give Bannon formal ‘testimonial immunity’ to force him to testify against his co-defendants or others involved in the fraudulent scheme.”

“He could also be called before a grand jury to question him about the culpability of others not yet indicted. In either case, if Bannon falsely denies facts establishing his own guilt, or that of his co-defendants, he will expose himself to prosecution for perjury.”

“Since any perjury will occur after the pardon was issued, the pardon will not protect him from prosecution for a new crime,” Martin and Lacovara conclude.

Vance fought an uphill battle trying to prosecute Paul Manafort, whom Trump pardoned in December, and who has already served a portion of his sentence and is therefore protected from being tried again.

“Bannon has no such protection because he hasn’t yet been put in ‘jeopardy’ even once,” Joel Cohen and Daniel R. Alonso, both former prosecutors, write in The National Law Journal.

Bannon would be the first of Trump’s cronies to test New York’s October 2019 amended double-jeopardy law.

Before the Trump era, New York had eliminated the double-jeopardy loophole, granting its residents more generous protection than federal legislation, which states that an individual can be tried twice in federal and state court as the two entities are “dual sovereignties.”

Charged with a state and federal felony

The dual-sovereignty ruling had nothing to do with Trump.

It involved an Alabama man, Terance Martez Gamble, who was stopped in 2015 for a broken headlight. Police found a gun, pot, and a digital scale in his car.

Alabama sentenced Gamble to a year in prison for violating state drug laws. Both Alabama and the federal government charged him with a felony for carrying a firearm.

Gamble was sentenced to one year in prison by the state and nearly four years in federal prison for carrying a firearm.

Will Bannon continue to lie for Donald Trump, or will he turn states witness like Michael Cohen? The two men couldn’t be more different.

Cohen is a loving family man who is capable of honesty. Bannon is a grifter. Pardoning Bannon, Trump must have sized him up as someone who would protect his secrets, like Paul Manafort and Roger Stone, both pardoned while serving jail terms.