My favorite comic strips have all disappeared from the pages of the Arizona Daily Star, with the lone exception of Non Sequitur by Wiley Miller.

There is news today that a beloved comic strip that has been gone for some time is returning. Dear Arizona Daily Star: I want this in my newspaper as soon as it is available! Berkeley Breathed Returning to “Bloom County” for First Time in 25 Years:

After 25 years, Berkeley Breathed is returning to his Pulitzer Prize-winning comic strip, “Bloom County.” Breathed announced the new incarnation of the politically-minded strip via a post on Facebook that featured him working on a new comic with the words “Bloom County 2015” at the top. 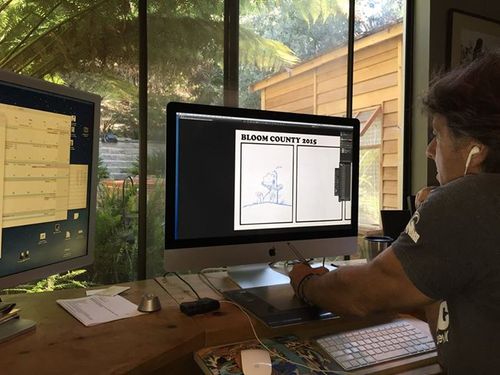 “Bloom County” originally ran from December 1980 until 1989, just two years after he won the Pulitzer. The characters, such as Bill the Cat, Opus the Penguin, Hodge-Podge the Rabbit, Milo Bloom, and Cutter John, lived on in the Sunday-only strip “Outland” from 1989 to 1995, as well as “Opus” from 2003 to 2008. When “Opus'” run ended, Breathed said he was stepping away from strips entirely and began focusing on writing children’s books. At the time, he said the political climate in the country had grown too bitter for him to continue taking a light tone on things, and he wanted to get out before things got too tough.

However, with the 2016 presidential campaign season heating up, it seems that Breathed has found something funny to talk about again.

This is like a long lost friend returning home. I’ve missed you Bloom County! 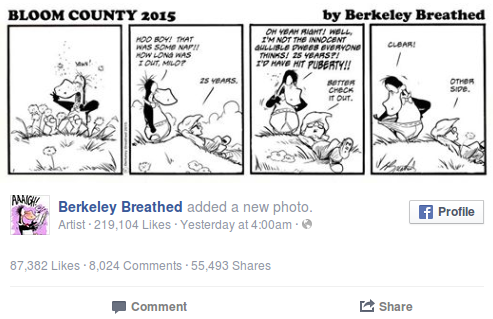