Britain’s Brexit is blowing up

Britain’s Brexit is blowing up 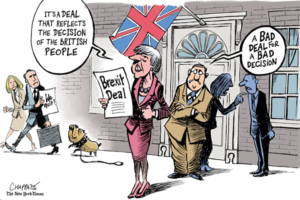 Great Britain may be about to demonstrate to America that when you go on a bender and do something really stupid, you can still correct your unwise error and attempt to redeem yourself.

The white nationalist Brexit from the European Union still might not happen after all.

The court concluded that any EU member state can revoke an article 50 process without needing approval from every other member state, but only before its withdrawal comes into force.

“The United Kingdom is free to revoke unilaterally the notification of its intention to withdraw from the EU,” the ECJ said.

The emergency judgment came the day before the critical Commons vote on Theresa May’s Brexit deal and will be reviewed urgently by Scotland’s civil court in Edinburgh.

That process will kickstart what is expected to be a last-ditch legal battle by the UK government to delay the ruling’s implementation, which is likely to end in the supreme court. Legal sources said, however, the European court’s ruling was binding and could not be be overturned at the supreme court.

While the decision means that MPs could in principle vote to revoke article 50 without the support of EU states, a second referendum would require an extension of the process – which would still be subject to veto.

The judges rejected arguments from both the UK government and the European commission that article 50, the two-year-long process that triggers a member state’s departure from the EU, could not be revoked unilaterally.

A spokeswoman for the court implied a decision to abandon article 50 would need to be taken by a vote in the Commons. Any revocation “must be decided following a democratic process in accordance with national constitutional requirements”, she said.

Monday’s decision upheld a finding by the ECJ advocate general, Manuel Campos Sánchez-Bordona, who said last week that article 50 of the Lisbon treaty allows the “unilateral revocation of the notification of the intention to withdraw from the EU, until such time as the withdrawal agreement is formally concluded”.

Dame Margaret Beckett, one of the most prominent Labour supporters of the People’s Vote campaign for a second referendum, said the ruling focused the Brexit debate on two options: accepting May’s deal or abandoning Brexit.

“We now all know beyond any doubt that we can stay in the EU – it’s not too late,” the MP said. “In the next few days we can take Theresa May’s deal off the table too. Other Brexit options do not work any better than that of the prime minister because there is no deal that can keep all the promises made two years ago, or is better than the deal we’ve got in the EU.”

This appears to be what is happening today. Prime Minister Theresa May has delayed a vote on her Brexit deal because she does not have the votes to pass it. Facing Defeat, Theresa May Seeks Delay on Brexit Vote in Parliament:

Facing the prospect of a humiliating defeat, Prime Minister Theresa May said on Monday that she would seek to postpone a parliamentary vote on her proposal for Britain’s departure from the European Union, throwing the process into disarray and highlighting her tenuous hold on power.

Parliament had been scheduled to vote on Tuesday on the agreement that Mrs. May reached with the bloc for Britain’s withdrawal, or Brexit — a critical moment in her political career and in the battle over an issue that has gripped British politics for nearly three years.

But weeks of bitter criticism and days of parliamentary debate had left no doubt that the plan would be soundly rejected by lawmakers, due in large part to objections over plans for dealing with the Irish border that pro-Brexit lawmakers say could potentially leave the United Kingdom tied to some of the bloc’s rules indefinitely.

“If we went ahead and held the vote tomorrow, the deal would be defeated by a significant margin,” Mrs. May said in an unscheduled address to Parliament on Monday afternoon, after she made a round of calls to consult with her cabinet ministers. “We will therefore defer the vote scheduled for tomorrow and not proceed to divide the house at this time.”

Although the prime minister appears to have the authority to unilaterally postpone the vote, there was opposition to such a move, adding yet another layer of unanswered questions to a process already steeped in uncertainty. Some opponents of the deal are eager to stick to the schedule and deliver a resounding defeat to the bill and to Mrs. May.

Mrs. May said that the only obstacle to parliamentary approval was disagreement over the status of Northern Ireland, which under the deal could remain more closely tied to the European Union than the rest of the country.“

There remains widespread and deep concern,” she acknowledged. But she insisted that the solution was not to alter the agreement, which she called “the best deal that can be negotiated,” but to keep trying to sell it to skeptical lawmakers, while seeking renewed assurances from Brussels about the status of Northern Ireland.

European Union officials have insisted that the deal, reached last month after lengthy negotiations, represents their final offer, and that the only alternative is for Britain to leave the bloc on March 29 without an agreement in place — an abrupt and chaotic prospect that officials on both sides of the Channel predict would be economically damaging.

“The Brexit withdrawal agreement is the only deal on the table between the E.U. and the U.K. and is not open to renegotiation,” said the Irish prime minister, Leo Varadkar.

What will happen next with Mrs. May’s government is unclear. Lawmakers have floated an array of possibilities, including a renewed effort to have Parliament approve her plan, an attempt within her own Conservative Party to topple her, a Labour call for a vote of no confidence, a snap general election, and a second popular referendum on whether to leave the bloc.

The leaders of the Scottish National Party and the Liberal Democrats announced that if Mr. Corbyn asked for a vote of no confidence in Mrs. May, their parties would support it — though their votes, combined with Labour’s, would still leave such a motion short of a majority.

Dozens of Conservative lawmakers who want a more complete break with Europe were expected to join most opposition lawmakers in voting against Mrs. May’s deal, though how many members of her party would abandon her was uncertain.

Steve Baker, a member of the European Research Group, an alliance of pro-Brexit Conservative lawmakers, said that postponing the vote would amount to “essentially a defeat” of Mrs. May’s agreement with the European Union.

The terms of the agreement “were so bad that they didn’t dare put it to Parliament for a vote,” he said on Twitter. “This isn’t the mark of a stable government or a strong plan.”

The Conservatives hold 315 seats, just shy of a majority in the 650-seat Parliament. Mrs. May governs with the cooperation of the Democratic Unionist Party of Northern Ireland, which holds 10 seats and vehemently opposes the Brexit deal.

Mrs. May started the two-year exit process by invoking Article 50 of the European Union’s treaty in March 2017. She has vowed to carry out the will of voters, who narrowly approved withdrawal from the union in a 2016 referendum.

But the European Court ruled that Britain could withdraw its Article 50 submission before that date, as long as it did so in accordance with the country’s democratic and constitutional arrangements, and communicated the decision in writing. The reversal would not require the approval of the 27 other member countries, the court said.

The decision is a boost for those who still hope that Brexit can be stopped, particularly if Parliament votes against Mrs. May’s deal. It came a day after thousands of people gathered in London for competing protests by supporters and opponents of Brexit, demonstrating that the issue has lost none of its divisive potency.

Even so, a decision to stop Brexit remains some way off. It seems likely that remaining in the union would require lawmakers to decide to hold a second referendum on whether to reverse the 2016 decision. So far, there is no obvious majority in Parliament for that step.

If Theresa May’s “Brexit” Deal fails and her government loses a no confidence vote or she calls for a snap election, parliamentary elections will turn on the issue of whether to hold a second referendum to void the first Brexit referendum and to remain in the European Union.

If Britain can correct its Brexit error, then America can surely correct its Trump error.