One of the most remarkable propaganda campaigns of the modern era are the George W. Bush apologists who would have you believe that “W”‘s presidency did not begin until September 12, 2001 (and that the Bush Great Recession did not begin until Barack Obama was sworn in on January 20, 2009, but that is another story).

On Friday, Tea-Publican presidential frontrunner Donald Trump sat down with Bloomberg Politics and had this exchange:

In the military this is known as the Officer On Watch. Anything that happens during your watch, you will be held accountable for.  The Donald is not saying anything particularly controversial here. It is an obvious truth.

But note the Bush apologist response from this reporter from Bloomberg, “you can’t blame George Bush for that.” Well yes, you can lady. George W. Bush was president, or as he preferred to call himself, commander-in-chief, on 9/11. He was the Officer On Watch, and he is most assuredly accountable for what happened during his watch.

Of course, the biggest Bush apologist is his “younger smarter brother” J.E.B.! Bush, whose campaign now increasingly consists entirely of a defense of his brother’s failed presidency. J.E.B.!  took to Twitter to respond to The Donald (because that is what the kool kidz do these days): 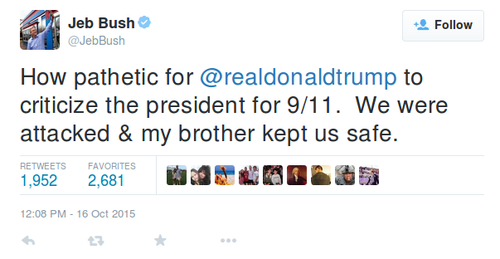 The alleged “younger smarter brother”J.E.B.!  does not comprehend that the first part of his sentence — “we were attacked” — entirely negates his campaign talking point that “my brother kept us safe.” This is an absurdity.

As Steve Benen pointed out last month, “it’s awfully difficult for Jeb to make the ‘kept us safe’ argument given that terrorists killed more Americans between 2001 and 2009 than under every other American president ever – combined.”

Of course, the Bush apologists in the Beltway media — the same media villagers who were complicit in helping George W. Bush  “catapult the propaganda”  to lie this country into an unnecessary and illegal war in Iraq — gave J.E.B.! the opportunity to go on the Sunday morning bobblehead shows and continue this Bush apologist line of attack. It did not go well.

Steve Benen notes today that, “Indeed, much to Bush’s apparent surprise, Donald Trump has apparently picked one of the most unexpected fights of the presidential campaign to date: a debate over George W. Bush’s failures surrounding the attacks of Sept. 11, 2001.” Trump and Bush wage the most unexpected GOP debate of 2015:

TAPPER: Obviously, al Qaeda was responsible for the terrorist attack of 9/11.

TAPPER: But how do you respond to critics who ask, if your brother and his administration bear no responsibility at all, at all, how do you then make the jump that President Obama and Secretary Clinton are responsible for what happened at Benghazi?

BUSH: Well, I — it’s — the question on then Benghazi, which is — hopefully we’ll now finally get the truth to, is, was that — was the — was the place secure? They had a responsibility, the Department of State, to have proper security.

Tapper carefully reminded the GOP candidate, “Well, that’s kind of proving the point of the critics I was just asking about, because you don’t want to have your brother bear responsibility for 9/11.”

I was surprised that J.E.B.! just didn’t respond with “It’s OK if you are Republican!”

More than 14 years after the 9/11 attacks, the Bush/Cheney administration’s handling of the crisis is generally untouchable for much of the domestic political world. This is especially true in Republican politics, where George W. Bush’s documented 9/11 missteps are not only ignored, his response to the terrorist attack is actually seen as a triumph.

The “Bush kept us safe” line, despite its conflict with the real world, is actually quite common in Republican circles.

And yet, Trump has no use for GOP orthodoxy and has no qualms about broaching a line that most Republicans go out of their way to avoid. For his part, Jeb Bush was not only caught off-guard trying to explain why Obama should be blamed for Benghazi but his brother shouldn’t be blamed for 9/11, the Florida Republican also finds himself once again replacing his usual campaign message with a public defense of his brother’s failed tenure.

The Bush apologists dismiss anyone who dares to question “what did George W. Bush know, and when did he know it?” as 9/11 Truthers. But one does not have to be a Truther to raise these questions. There is a massive amount of contemporaneous reporting from 2001, post 9/11 reporting and analysis, and of course, Congressional investigations and reports into 9/11. Bush apologists would have you wipe all of this from your memory (unfortunately for them, most of this reporting is still available online).

This knee-jerk defensive response of Bush apologists is wrapped up in 9/11 and the Bush-Cheney administration’s lying this country into an unnecessary and illegal war in Iraq, and its illegal torture program, both war crimes. There is no statute of limitations for war crimes under the Nuremberg Principles, and everyone involved could conceivably be prosecuted at some point in the future. Bush apologists strive to dismiss even the suggestion of such a possibility as just “crazy” Truthers.

The Neocon war mongers responsible for these war crimes still hold positions of influence and power in government, academia, and the media, and seek to return to power to continue their quest of a Pax Americana empire built on military invasion and occupation.  J.E.B.! Bush was supposed to be their ticket back to power, but he is failing miserably as a presidential candidate.

No worries, these Neocon war mongers will gravitate towards whomever the eventual GOP nominee is for president. If a Tea-Publican is elected president in 2016, they will return to power. And their perpetual war will continue.