Governor Gavin Newsom on Friday made California the first state to alter its voting plans for the general election in response to the coronavirus pandemic. The LA Times reports, California voters asked to vote by mail in November due to coronavirus fears:

Citing public health concerns over millions of Californians showing up at voting locations this fall, Gov. Gavin Newsom on Friday ordered ballots to be mailed to the state’s 20.6 million voters for the November election while insisting there will need to also be new rules for anyone who participates in person.

The decision makes California the first state in the nation to temporarily shift to all-mail voting as a result of the COVID-19 pandemic — prompted, Newsom said, by the likelihood that public health conditions will not have improved to a level at which millions of people could show up on a single day to cast a ballot.

“There’s a lot of excitement around this November’s election in terms of making sure that you can conduct yourself in a safe way, and make sure your health is protected,” Newsom said during a midday event.

The decision to radically rethink the November election comes after a series of urgent requests and proposals made by lawmakers and local elections officials alike.

These same concerns and proposals have been made by some Arizona lawmakers and local elections officials, but have fallen on deaf ears amongst our Republican-controlled legislature and Republican governor. Governor Ducey should call a special session to provide for all-mail balloting in the August primary and November general election, and to provide adequate funding to county elections offices to ensure that it runs smoothly.

“People are not going to want to go to an in-person voting site,” said Joseph Holland, the registrar of voters in Santa Barbara County and president of the California Assn. of Clerks and Elections Officials. “If you send voters a ballot in the mail, they’re more likely to vote than if they have to go to a polling place to vote.”

Local officials, who plan for elections months in advance, are eager to begin making preparations for November. The change to mailing every voter a ballot also will include a significant public education effort, especially for those voters who may not realize the documents that arrive are an actual ballot and not sample materials.

California currently has a patchwork system for voting in person, one that varies by county. While the majority of local governments offer traditional polling places on election day, 14 counties already mail a ballot to every voter under provisions of a 2016 law that swaps new “vote centers” for traditional neighborhood polling places. L.A. County, the only place allowed to enact that system without mailing all voters a ballot this year, is already poised to do so for November after the March primary saw widespread problems, including long lines at in-person vote centers that are now being investigated by auditors.

Legislators had introduced bills to require ballots mailed to all voters prior to Newsom’s action on Friday. His decision to impose the change by executive order expedites the effort by state and local officials. But his directive leaves a key question unanswered: What provisions will be made for voters who still want or need to vote in person?

Advocates for disabled voters and communities of color say the state will need to maintain a robust set of options for those who want to vote in person in the days leading up to the election as well as on election day.

“Reductions to in-person voting raise very real concerns for disenfranchisement, particularly for communities that already face barriers to voting, such as voters with limited-English proficiency, voters with disabilities, and voters who are underrepresented and rely on in-person voting at higher rates, Latino, and young voters,” Raúl Macías, an attorney for the Brennan Center for Justice at NYU School of Law, wrote in a letter to Newsom last month.

Newsom’s executive order doesn’t lay out a specific set of rules for in-person voting, but urges state officials to craft a plan by the end of this month.

Holland said it’s important for counties to have as much flexibility as possible, given the possibility that new outbreaks in coronavirus cases could develop in the final weeks leading up to the election. “We really don’t need the Legislature telling us there’s a strict formula, when we may not be able to meet it,” he said.

Newsom said Friday that in-person voting options will remain an important part of the November election.

“We still want to have the appropriate number of physical sites for people to vote as well,” he said.

There is one guy who is not happy about Governor Newsom’s order, and it has nothing to do with any concerns he has about disabled voters and communities of color voting, because he sure as hell does not want them turning out to vote. Trump Livid After California Allows Statewide Mail-In Voting: ‘These Votes Must Not Count’:

[A] furious President Donald Trump is demanding that the votes in the deeply Democratic state be thrown out.

“So in California, the Democrats, who fought like crazy to get all mail in only ballots, and succeeded, have just opened a voting booth in the most Democrat area in the State,” he tweeted on Saturday. “They are trying to steal another election.”

“It’s all rigged out there,” Trump also wrote. “These votes must not count. SCAM!”

As I said, five states — Colorado, Hawaii, Oregon, Washington, and Utah — already mail out ballots to all registered voters for every election, and 34 other states provide access to mail-in ballots for anyone who wants one, including Arizona where 80 percent of Arizona voters vote early by mail-in ballot. Applying Trump’s unhinged hysterical logic, should all of these votes not be counted as well? Trump is just making himself look ridiculous.

On the previous day, Newsom ordered all California county elections officials to send registered voters mail-in ballots for the elections on November 3 amid the COVID-19 pandemic. The Golden State is the first in the country to do so.

“Elections and the right to vote are foundational to our democracy,” the governor stated in a press release. “No Californian should be forced to risk their health in order to exercise their right to vote.”

Like Republicans in the state of Wisconsin forced voters to do in its recent primary election. Most recent numbers: 67 got COVID-19 after visiting polls in state’s April 7 election but tie to voting unclear. The tally of 67 COVID-19 cases potentially related to the April 7 election comes a month after the election and on the last day health officials said contact tracers would ask about the election when following up on new cases.

Heather Cox Richardson warns at Letters From an American (excerpt):

The third big story is that the Republican National Committee and the Trump reelection campaign have budgeted $20 million to fight Democratic attempts to make remote voting easier during the pandemic. Although there is no evidence that mail-in voting causes fraud, and although some states already do it with no ill effects, RNC chief of staff Richard Walters fell back on the idea that easing restrictions to make it easier to vote would contaminate elections. “Democrats may be using the coronavirus as an excuse to strip away important election safeguards, but the American people continue to support commonsense protections that defend the integrity of our democratic processes,” he said, and Republicans were willing to sue Democrats “into oblivion and spend whatever is necessary.”

Republicans are willing to sue Democrats “into oblivion and spend whatever is necessary” to put American lives at risk in order to to vote and to engage in voter suppression. Good to know, but then again, you already knew that.

The Washington Post editorializes, Federal leaders must get behind absentee voting — or explain why they’d prefer chaos and killing voters and poll workers:

As the covid-19 pandemic continues, more people will conclude absentee voting is the safest option. And they will be right.

But much of the country is not ready for a surge of absentee voters. Federal leaders must help immediately — or explain why they instead prefer an unsafe and chaotic November election.

Ill-preparedness could produce electoral calamity. Sixteen states still require absentee voters to have a valid excuse. All of these states should declare that coronavirus fears qualify as one. But that’s just a first step. Serving millions of new absentee voters will be a massive logistical challenge for most states.

Avoiding [failures like Ohio and Wisconsin] on a larger scale in November will require investment and planning at a time when state revenue is collapsing. States and localities must buy letter-opening machines, mail sorters and ballot scanners. They will need space to accommodate equipment and staff practicing social distancing measures. They will need money for printing and postage. States must bolster absentee-ballot-tracking systems and ensure they have the ability to notify voters whose ballots were discarded because of a signature mismatch or other issue.

States must also prepare to conduct better in-person polling, as many Americans will refuse to transition quickly to mail-in balloting, and some people have no postal address or need vision or other assistance. States must ensure procedures, protective gear and infrastructure are in place to protect staff and voters at remaining polling places. This, too, will cost money.

The federal government is best situated to fill funding gaps and encourage the planning that must happen now. Lawmakers committed $400 million in Congress’s last economic rescue package. That number falls far short of the need. A recent study from a bipartisan group of election experts found that funding requirements in just the five states they examined — Georgia, Michigan, Missouri, Ohio and Pennsylvania — totaled at least $414 million.

Taking a cue from President Trump, who opposes wider mail-in balloting because he thinks it helps Democrats, congressional Republicans have resisted, raising bogus concerns over voter fraud. States could put reasonable limits on “ballot harvesting” — that is, when third parties collect and submit absentee ballots on behalf of voters. But voter fraud of any type is extremely rare in the United States, and it is no excuse to keep voting difficult or dangerous in the midst of a pandemic.

Congress has committed trillions to staving off an economic catastrophe this year. Why would Republicans skimp on preventing a democratic disaster, too?

I assume this is a rhetorical question, to which we already know the answer: President Donald Trump said that if the United States switched to all-mail voting, “you’d never have a Republican elected in this country again.” 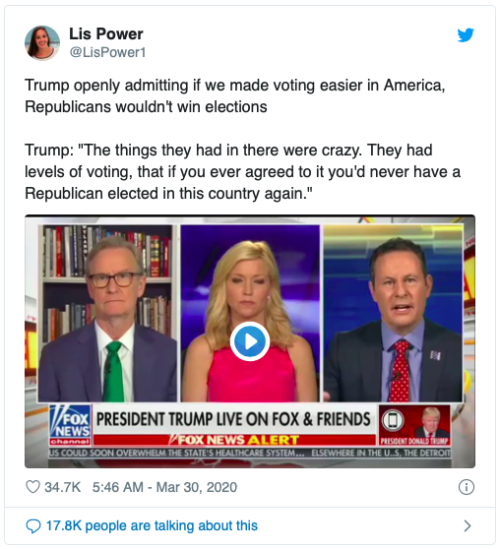 Soooo, Republicans can only win elections by suppressing voter turnout, i.e., “rigging the election,” a claim which Republicans project onto Democrats who actually want to increase voter participation in elections.

We must be living in the upside down of Stranger Things.