On Saturday, I asked Where does ‘Cathi’s Clown’ stand on the Religious Bigotry bill?

The Center for Arizona Policy (CAP) stealth candidate for governor of Arizona is the only candidate yet to take a position on the Religious Bigotry bill. Cathi Herrod from CAP is on State Treasurer Doug Ducey’s campaign steering committee (he proudly displays her endorsement on his campaign web site).

Where does “Cathi’s Clown” stand on the Religious Bigotry bill?

To be fair, on Sunday “Cathi’s Clown” answered this question for The Arizona Republic. Governor candidates weigh in on SB 1062 (from one of the Republic’s multi-media reports): 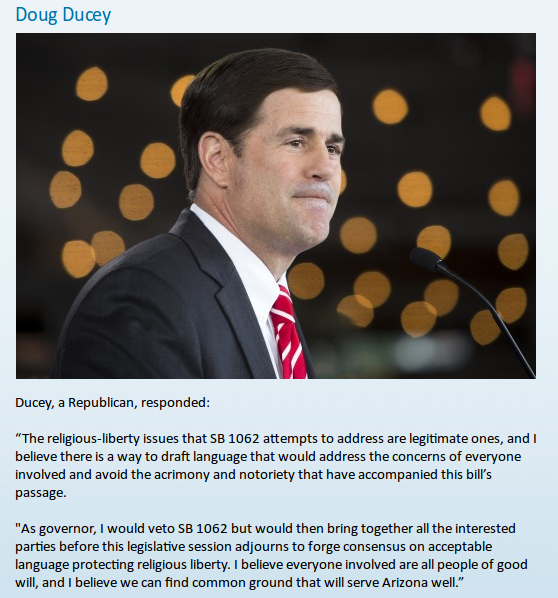 So Ducey would veto this bill, but he would invite Cathi Herrod from his campaign (and others) to the table to write another bill? Way to straddle the fence there, Ducey. This is not a satisfactory answer.

And what is this “before this legislative session adjourns” parameter? What’s the rush? Assuming that you are elected governor (God help us) you would not take office until January 2015. This is an empty promise on which you cannot deliver.