Taegan Goddard at the Political Wire uses rounding to make the argument that Lesko’s Margin Shrinks to Just 4 Points in the CD8 special election:

Martin Longman at the Political Animal Blog has an insightful analysis of this special election:

Harry Enten of CNN makes three important observations about the results in yesterday’s special election for Arizona’s Eighth Congressional District. Debbie Lesko, a Republican state senator, appears to have defeated Democrat Hiral Tipirneni, a physician, by five or six points [now under 5].  But it’s a district that preferred Mitt Romney to Barack Obama by 25 points and Donald Trump to Hillary Clinton by 21 points.  Overall, AZ-08 is twenty-five points more Republican than the nation as a whole. This Republican underperformance isn’t new; it’s part of a pattern we’ve seen this year and last in special elections where the Democrats are consistently doing much better than they have in the recent past. 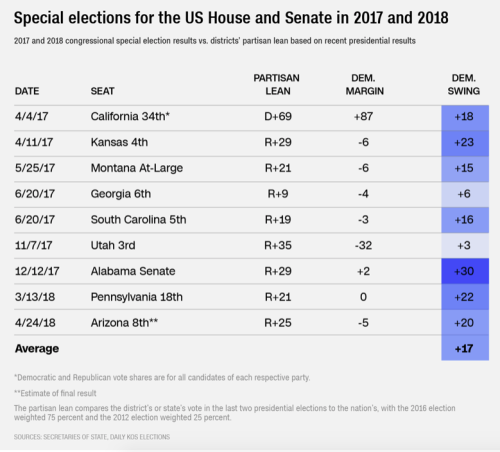 Enten notes that “Including Arizona 8, the average improvement for the Democrats has been 17 percentage points versus the partisan baseline. That’s better than any party out of power has done in the lead-up to a midterm cycle since at least 1994.”

But Enten notes that the Republicans had legitimate reason to hope that last night’s special election would break the pattern or at least show less severe erosion. For one, the generic congressional ballot still shows a preference for the Democrats but it’s a weaker preference than was present for prior special elections. For another, there was no turnout differential, meaning that Republican registrants showed up at the same rate as Democratic registrants, and overall turnout was robust and nearly at the same level as the 2014 midterms. There was high interest on both sides and solid participation, which is unusual in special elections. These numbers were already evident in the early mail-in vote and they should have favored the Republican candidate in a heavily Republican district, but there was still a massive drop-off in the margin of victory. This takes away the two most commonly used excuses for Republican underperformance: low turnout and an enthusiasm gap.

Finally, Republicans had a good candidate in Lesko. She had no major scandals and raised plenty of money. One of the excuses in previous elections that Republicans lost like Alabama US Senate (with Republican Roy Moore) and Pennsylvania 18 (with Republican Rick Saccone) was that the Republican was either scandal plagued or didn’t know how to raise funds. Lesko wasn’t either of those, and there was still a significant shift to the left.

The main reason all of this matters is that there are reasons to doubt that the Democrats will do as well in the midterms next November as they’ve been doing in these specials, and the biggest doubts have to do with enthusiasm and turnout. The lower the overall participation, the greater the importance of enthusiasm. All votes count equally, whether they are cast with a smile or a grimace. If Republicans turn out in November it won’t matter that they aren’t skipping to the polls eager to mark their ballots for the GOP candidates. But if they stay home and the Democrats show up, then they may lose a lot of seats. That’s the theory, but the Arizona results show that the problem is different. A lot of registered Republicans are showing up and voting for the Democratic candidate.

[T]he New York Times ran an article this week on a study purporting to find that Trump voters were motivated by their fear of losing their privileged position in American society rather than by economic anxieties. That’s a polite way of saying that racism played a bigger role than concerns about retirement security or economic opportunity. I’m all for studying the electorate, but the Arizona results should be considered here, too. 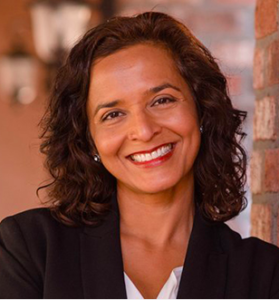 The Democratic candidate was born in Mumbai, India. She was running in a Sunbelt district known for its large population of white retirees. Because of the large and growing Latino population of Arizona, the politics there have a built-in racial character and Republicans see their advantages slipping away which causes them seek ways to maintain power by disenfranchising Latino voters. This district is almost ground zero for the type of status anxiety whites feel in the face of demographic change. An Indian-American immigrant running against a white woman presented a clear tribal choice for voters primarily motivated by this kind of anxiety. Nonetheless the results showed a massive crossover of Trump voters to the Democrat.

What the Democrats should start studying this morning are the causes of this crossover. What elements of it are durable? What themes are transferable to other districts?

But they won’t even think to do that if they continue to believe that Trump’s voters are all deplorable lost causes who are too motivated by racism and protecting their privilege to be reachable by any messages.

See, for example, the column of Charles Blow of the New York Times, The White Rebellion, discussing the “new study published this week in the Proceedings of the National Academy of Sciences which found what other studies have found: Support for Trump was largely motivated by white fear of displacement from dominance.”

Clearly there were substantial Republican cross-over votes for the Democrat Hiral Tipirneni. The Tipirneni campaign, the Arizona Democratic Party, the DCC and its pollsters need to survey Republican voters in CD 8 to find out why they crossed over to vote for Tipirneni. It has to be something more than the fact that she is an attractive and well qualified serious candidate who offered voters in CD 8 a clear alternative to the GOP candidate for the first time in many years.

Whatever that “something’ is, Democrats need to learn what it is, and fast.

“There’s something happening here / What it is ain’t exactly clear.” – For What It’s Worth, by Buffalo Springfield.

Tipirneni’s surprising and exceptional performance with a grassroots campaign funded by small donors, without the financial support of the DCCC and other Democratic aligned outside groups, should now attract their financial support for the November general election. Tipirneni is within less than 5 points of Debbie Lesko now. This is a doable margin to overcome with a solid ground game infrastructure and a well-financed ad campaign, something no Democratic candidate has enjoyed in this heavily Republican district in decades.

This special election should sound a warning alarm to other Republicans in Arizona congressional, statewide and legislative races. Your decades-long stranglehold over this state may finally be coming to an end.