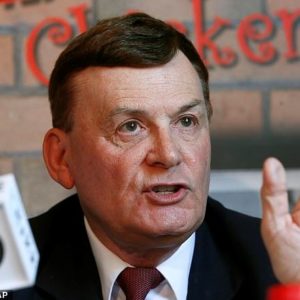 Score one for decency in Government today.

In a surprising development on Wednesday, March 27, Prescott Legislative District One State Representative David Stringer resigned from the State House after months of controversy stemming from racist comments and the revelation that he had been charged with sexual misconduct in Maryland 35 years ago.

The controversial legislator had vowed not to resign despite calls from members of both parties, including Governor Ducey. There was even in an effort to consider recalling Stringer if he did not resign. The obstinacy of Stringer had morphed to a level where he even directed his attorney to argue before the Maricopa County Superior Court to stop the House from expelling him for not complying with handing over documents (pertaining to the sexual misconduct matter), per a subpoena, to the State House Ethics Committee. Instead of following through with the hearing, he, after months of stonewalling, chose to resign.

Reaction among most in the political arena has been largely positive towards this development with House Democrats applauding the resignation. Christopher Hanlon, a leader for the Anti Stringer Group Arizona Deserves Better relayed that:

“The resignation of the racist David Stringer is a welcome development for the State of Arizona. Arizona Deserves Better has worked over the past two months to mobilize Republicans, Democrats, and Independents to pressure both David Stringer and his House colleagues for such an outcome as this, and so we are glad Stringer will no longer serve in the Arizona House. Our materials have reached over 15,000 Arizona voters, many of whom called and otherwise pressured the House Ethics Committee. We thank those citizens as well as our donors and volunteers.”

Only a few Republicans like the other LD One State Representative Noel Campbell expressed regret that Stringer resigned, stating “No human being can stand that kind of pressure and ostracization.” How about the pressure and ostracization faced by the people affected by Mr. Stringer’s actions and comments? Do they not deserve consideration as well.

How does the Stringer Resignation affect the Legislative Calendar?

The Stringer resignation reduces the number of Republicans in the State House to 30 with 29 Democrats.

Will this mean that the Democrats have more leverage on bills and other legislative measures like the budget?

Probably not because, as a former state lawmaker and House Minority Leader David Lujan of the Arizona Center for Economic Progress stated that:

“I predict the Republican PCs and Board of Supervisors in Yavapai County will move as quickly as possible to appoint his replacement. I would be surprised if they do not already have candidates lined-up. They will move quickly because the House Republicans now only have 30 members, one short of what they need to pass bills on partisan lines. I think it will probably only take about 2 weeks to appoint a replacement so for that time period you will not see any bills come up for a vote that does not have the support of at least a few Democrats. The budget is not expected to be ready for several more weeks. I don’t think it will be impacted by the Stringer vacancy.”

Whatever results legislatively from the Stringer Resignation, it is a time for people who demand decency from our public servants to celebrate. Hopefully, this, along with the Don Shooter incident from last year, will serve as a message that only individuals who treat others with respect and fairness need run for office.