Gov. Doug Ducey said Thursday he’s convinced the climate is changing. But he doesn’t necessarily believe it is caused by anything that he or anyone else is doing.

The pervasive drought leads to the question of whether any of this is the result of climate change.

“We just went through a great briefing of all the experts,” responded Gov. Doug Ducey who was at Thursday’s event.

“They informed me that the climate is changing,” he said. “It’s going to get warmer here.”

Pushed for specifics, the governor said he does believe in climate change.

“What I am skeptical about is what human activity has to do with it,” Ducey said.

What else would you expect from the man hired by Koch Industries to manage their Southwest subsidiary formerly known as the state of Arizona (h/t Charles Pierce). 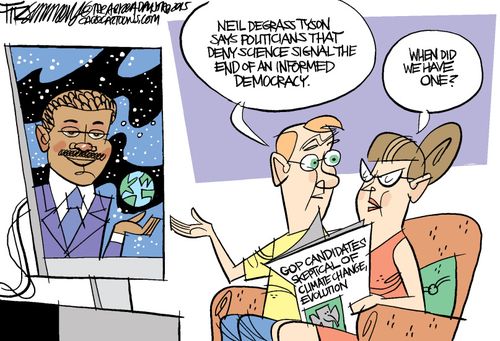 Siiigh. We have a national leader and an example of what a real governor should look like right next door in California. California governor orders country’s most aggressive emission cut goals:

California Gov. Jerry Brown (D) is ordering his state to cut harmful carbon emission levels more aggressively than any other government in North America, as an historic drought grips the Western United States.

In an executive order issued Wednesday morning, Brown set a goal of cutting carbon emissions by 40 percent below 1990 levels by 2030, matching a target set by the European Union in October. Those targets are stricter than ones implemented under Brown’s predecessor, Arnold Schwarzenegger, who aimed to reach 1990 emission levels by 2020 and then cut emissions a further 20 percent by 2050.

Brown said the state is already on track to meet or exceed Schwarzenegger’s goals. The new targets are far more ambitious.

“With this order, California sets a very high bar for itself and other states and nations, but it’s one that must be reached — for this generation and generations to come,” Brown said in a statement announcing the new goals.

The order will incorporate planning for the impacts of climate change into California’s long-term infrastructure and financial planning. It also orders state agencies with jurisdiction over sources of greenhouse gas emissions to limit those emissions to hit the new targets.

Brown has made a response to climate change a cornerstone of his fourth and final term in office. In his inaugural address in January, Brown said California will derive half its electricity from renewable sources in the next 15 years. He also aims to reduce current use of petroleum in cars and trucks on state roads by half.

“We must demonstrate that reducing carbon is compatible with an abundant economy and human well-being,” Brown said in his inaugural address. “Taking significant amounts of carbon out of our economy without harming its vibrancy is exactly the sort of challenge at which California excels. This is exciting, it is bold and it is absolutely necessary if we are to have any chance of stopping potentially catastrophic changes to our climate system.”

California, Oregon, Washington and British Columbia have signed a regional agreement to reduce carbon emissions, and Brown has signed separate accords with leaders in Mexico, China, Japan, Israel and Peru. Brown has argued those agreements could help force national governments — including the United States — to come to an agreement when the United Nations convenes a climate change conference in Paris later this year.

Gov. Jerry Brown has been taking bold moves to address California’s worst-ever drought and climate change before it is too late.

Here in Arizona, we have a climate science denier for governor, and Chuck Cullom, Central Arizona Project’s Colorado River program manager, actually said the drought “isn’t a crisis for Arizona, but it’s really a signal that all users in the basin need to address the long-term imbalance between supply and demand.” Risks of CAP shortages next year hit 33% – Arizona Daily Star. Really, Chuck?

The federal government ratcheted up its risk estimates for Central Arizona Project shortages on Wednesday.

The odds of a shortage in water deliveries to Arizona and other Lower Colorado River Basin states in 2016 are now 33 percent, up from 21 percent as predicted in January, the U.S. Bureau of Reclamation said.

The bureau raised the odds of shortages three days after Lake Mead on the Colorado River hit another record low level — the third time that’s happened since 2010.

Snowpack levels in the Colorado River’s Upper Basin are significantly lower now than in January, which reduces runoff into the river and into Lake Powell, which releases water to Lake Mead at the Nevada border. Water for the CAP canal system is stored in Lake Mead.

If there is a shortage next year, it would reduce total CAP deliveries 320,000 acre-feet, or 20 percent. Seventeen irrigation districts would get less water. There would be no water delivered to the state to recharge into the ground as a set-aside for future shortages. Cities and Indian tribes probably wouldn’t lose CAP water for at least five years.

The bureau will make a decision as to whether to declare a shortage for next year as early as August or as late as December.

The prospect of shortages highlights the state’s continuing vulnerability to droughts and overuse of Colorado River water compared to its supply.

Nevada and Mexico would also absorb cuts in water deliveries from the river if a shortage is declared, but the reductions would be far less than Arizona would suffer. California is exempt from any cuts in Colorado River deliveries unless the CAP loses its entire 1.5 million acre-foot supply, under the 1968 federal law that authorized CAP’s construction.

By 2020, the odds rise to 14 percent that the project would lose 480,000 acre feet and that Lake Mead would drop below 1,025 feet in elevation. Then, the seven river-basin states would have to decide how the river would be managed when and if the lake dropped to the once-unthinkable level of 1,000 feet.

That’s the level at which cuts in CAP deliveries to cities and tribes could occur — cuts once considered unlikely until the 2030s.

The difference between these governors reminds me of Aesop’s Fable, The Ant and the Grasshopper. “Why bother about water?” said the Grasshopper; we have got plenty of water at present.” Arizona should be like the ant and treat this drought as a crisis now to mitigate the crisis. “It is best to prepare for the days of necessity.” Arizona needs leadership. We are not getting it.