The Arizona Capitol Times (subscription required) reports that Legislative District 10 Republican Rep. Todd Clodfelter is proud to fly his Confederate battle flag on his personal computer at the state legislature, and is proud of his Southern ancestry.

The Confederate battle flag, which became popular as a symbol of opposition to the civil rights movement of the 20th century, is a symbol of defending slavery, state sanctioned segregation, white supremacy and institutional violence against African-Americans. If Rep. Clodfelter does not understand this history and is insensitive to how offensive this symbol is to African-Americans, he is an idiot. Pair of lawmakers at odds over display of confederate flag on laptop:

After saying he would not remove the Confederate flag image displayed on his laptop in the Arizona House, Rep. Todd Clodfelter, R-Tucson, said he’ll leave the computer at home instead [with Confederate flag intact].

The Tucson Republican’s 180-degree turn came one day after Rep. Geraldine Peten, D-Goodyear, expressed concerns that she could clearly see the flag from her desk, located one row behind Clodfelter’s seat, during a mandatory harassment and ethics training session at the House of Representatives Jan. 9. 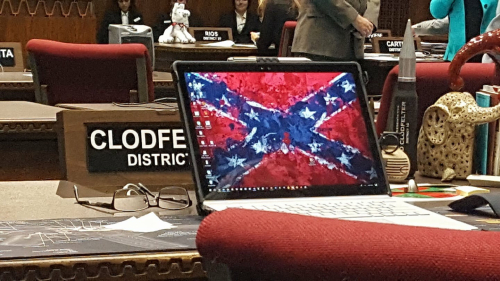 “To me it’s intimidating,” she told her colleagues. “It creates a hostile work environment.”

Rep. Geraldine Peten is correct. Under the new guidelines being adopted by the legislature to come into compliance with the Arizona Civil Rights Act to deal with complaints filed against members of the legislature — arising out of the sexual harassment claims against Rep. Don Shooter — Rep. Peten would be within her rights to file a complaint for a racially hostile work environment over this incident. It would appear that this “mandatory harassment and ethics training” needs some work.

Peten, one of only two African American legislators in Arizona, initially didn’t identify on whose desk she saw the flag, but later told the Arizona Capitol Times it was Clodfelter’s.

Clodfelter initially said the flag — displayed on his personal laptop, he noted, not his state-issued computer — wasn’t going away, and the two lawmakers would have to “agree to disagree.”

“We need to talk more, and we’ve already had a brief discussion and I understand her position, but I also have my position, too,” Clodfelter said Jan. 9. “All my family and ancestry is from the South. And my perspective of the imagery of that particular flag is not the same as hers. So from my perspective, it’s acceptable. From hers, it’s offensive.”

Peten told the Capitol Times that after confronting Clodfelter Jan. 10 and asking him to take down the image, he ensured her she wouldn’t see it again.

The image, Peten said, was “in direct contrast to the training yesterday.”

“If we’re to honor the training we received … that flag has no place here, or anywhere for that matter, but specifically not in the public space,” she said.

Clodfelter clarified that he was only using his personal laptop to finish some “personal business,” but would no longer bring that laptop to the floor and would instead use his state-issued computer. He stood by his argument that the image has different meanings for each of them.

“We obviously have some different opinions but after our conversation today we can work together to learn more about each other … rather than being at odds over an image that she perceives one way and I perceive another,” he said.

‘Gov. Ducey has resisted, and said he has no interest in removing Confederate monuments from Arizona property.”

There is a Legislative District 10 town hall scheduled for Saturday, January 20, 10:00 a.m., at (new location) the Miller Golf Links Library, 9640 E Golf links Road, Tucson. State Senator David Bradley and Reps. Kirsten Engel and Todd Clodfelter are scheduled to appear to give a legislative session preview followed by Q & A from constituents. Show up and give Confederate Clodfelter a piece of your mind.

Rep. Todd Clodfelter explained to me Thursday night he continues to have a favorable view of the Southern cause in the Civil War.

To him, the flag “represents sovereignty and freedom and revolution toward tyranny.”

But honestly, it’s probably too late for him. The Democrats have already criticized him for displaying a racist symbol. And I can imagine a “Confederate Clodfelter” label will be attached to him in the coming campaign, making a difficult re-election bid nearly impossible.

You got that right!

Rep. Clodfelter subscribes to the revisionist history of the Lost Cause of the Confederacy that calls the Civil War the War of Northern Aggression and views  the Confederate cause as a heroic struggle for the Southern way of life while minimizing or denying the central role of slavery. The Lost Cause belief system argues that slavery was not the main cause of the Civil War. The Lost Cause belief system stresses the idea of secession as a defense against a Northern threat to their way of life and says that the threat violated the states’ rights guaranteed by the Constitution. They believe any state has the right to secede.

The Lost Cause belief system portrays the South as more profoundly Christian than the greedy North. It portrayed the slavery system as more benevolent than cruel, emphasizing that it taught Christianity and civilization. Stories of “happy slaves” were often used as propaganda in an effort to defend slavery. Many times they also portrayed slave owners being kind to their slaves.

In recent decades Lost Cause themes have been widely promoted by the Neo-Confederate movement in books and op-eds, and especially in one of the movement’s magazines, the Southern Partisan.

Martha McSally and Moscow Mitch do not care about the People Afraid to go back to work:

Andy Biggs wants to disband Coronavirus Task Force – because the...