Back in early May, the Trump administration asked the court to strike down all of Obamacare:

The Trump administration filed a motion in opposition to the entire Affordable Care Act aka “Obamacare” on Wednesday, arguing in a federal appeals court that the signature Obama-era legislation was unconstitutional and should be struck down. Trump Administration Files Formal Request to Strike Down All of Obamacare.

Such a decision could end health insurance for some 21 million Americans and affect many millions more who benefit from the law’s protections for people with pre-existing medical conditions and required coverage for pregnancy, prescription drugs and mental health.

The filing was made in a case challenging the law brought by Ken Paxton, the attorney general of Texas, and 17 other Republican-led states. [Arizona is among the 17 states asking a federal court in Texas to strike down the Affordable Care Act]. In December, a [hand-picked conservative activist] federal judge from the Northern District of Texas, Reed O’Connor, ruled that the law was unconstitutional.

A group of 21 Democratic-led states, headed by California, immediately appealed, and the case is now before the Fifth Circuit Court of Appeals in New Orleans. The House of Representatives has joined the case as well to defend the law.

In a surprise move that legal experts said added an unexpected threat to Obamacare, the Fifth Circuit Court of Appeals, only weeks before oral argument in this case in July, “asked who — if anyone — has standing to appeal the December lower court ruling after the Trump administration recently sided with red states who brought the lawsuit.” Appellate court raises new threat to Obamacare:

The request from one of the most conservative circuit courts in the country suggests that the judges who will hear the could toss out the appeal on procedural grounds. In that scenario, the lower court ruling would stand, leaving in doubt the future of the expansive 2010 health care law.

The implications of such a decision for the future of the Affordable Care Act are difficult to parse without more information, legal experts said. But most suggested that it wouldn’t bode well for supporters of Obamacare.

“The odds that the Fifth Circuit does something nasty to the health-reform law have gone up,” Nicholas Bagley, a professor at the University of Michigan Law School who has followed the case closely, wrote on Twitter.

The lawsuit was brought by more than a dozen GOP-led states who claim Obamacare was invalidated by Congress’s decision to eliminate the individual mandate penalty in its 2017 tax cut. A group of Democratic-led states and the Democratic-led House are defending Obamacare in court.

The 5th Circuit, which is scheduled to hear oral arguments on the lawsuit in two weeks, questioned whether the Democrats had standing to defend the law after the Trump administration made a significant shift in legal strategy. The Trump administration initially only supported part of the lawsuit brought by more than a dozen GOP-led states, requesting that the courts strike just the law’s insurance protections, including those for people with preexisting conditions. But in an expansion of the legal fight in March, the Justice Department backed the lower court ruling against the entire ACA.

Parties in the case were asked to file additional briefs addressing whether the administration’s legal shift “mooted the controversy and no other defendant has standing to appeal.” The parties have seven days to file the briefs, and the court said they should be prepared to address the standing questions during oral arguments, scheduled for July 9 in New Orleans.

The court has not yet said which three judges will hear the case. Eleven of the 16 active judges on the 5th Circuit are Republican appointees, including five named to the bench by President Donald Trump.

Katie Keith, a professor at Georgetown Law who has written extensively about ACA legal issues, said the optimistic interpretation for ACA supporters is that the appellate court is simply paying deference to a recent Supreme Court ruling addressing standing that’s cited in the new order.

“They want to cross their T’s and dot all their I’s so that it’s not grounds to somehow overturn whatever decision they’re going to make” Keith suggested.

This is cockeyed optimism. You should consider this a flashing red light warning that conservative activist justices intend to do what the Republican Congress and President Trump failed to do — repeal “Obamacare” — on the most specious legal argument imaginable from the trial judge, only made possible by the sabotage attempts of the Republican Congress.

Joan McCarter reported at Daily Kos, House Republicans prove once again they don’t want you to have health care:

Last week, House Republicans were given yet another opportunity to separate themselves from Donald Trump’s lawsuit to destroy the Affordable Care Act. Once again, they sided with Trump. The House considered amendments to top a “minibus” spending package Thursday and in addition to funding a number of agencies, they adopted an amendment to defund the Trump administration’s efforts in federal courts to overthrow the law.

Freshman Democratic Rep. Laura Underwood of Illinois offered the amendment, which passed 238-194. Just four Republicans decided that sticking with the American people—particularly the 134 million estimated to have pre-existing conditions—isn’t as important as sticking with Trump. What’s at stake in this lawsuit is health coverage for 20 million people who’ve gained it through Obamacare is at stake here, as well as the ongoing coverage for people whose illnesses could once again be excluded in health plans if the law is struck down.

This is the second time the vast majority of Republicans voted with Trump and against Americans on health care in just two months. Just last month, the House passed the Protecting Americans with Preexisting Conditions Act of 2019 230-183, with just four Republicans breaking ranks.

They really couldn’t make it more clear. A decade later, Republicans are still fighting against the idea that everyone should have access to health coverage and they’re still lying about it. They’ve had nine years of debate to come up with a plan and they’ve failed for nine years. And they’re going to go out on the campaign trail one more time to try to convince voters that none of that has happened and they have a plan.

On Sunday on Meet the Press with Chuck Todd, Donald Trump tried to gaslight Americans into believing that he never actually tried to kill “Obamacare.”  It has been the central premise of every GOP campaign since 2010! “Your just imagining it.” 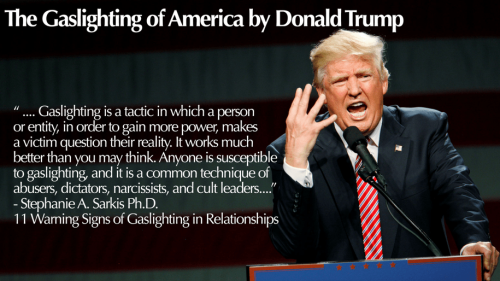 Steve Benen reports, Trump’s curious boast: he ‘decided not to’ kill the ACA:

In reality, whether the Republican knows this or not, it was just last month that the Trump administration implored a federal appeals court to tear down the health care reform law in its entirety, stripping its benefits from tens of millions of Americans.

It led to one of the more curious boasts of Trump’s tenure:

“I had a decision to make. I could have politically killed Obamacare. I decided not to do it.”

The Republican proceeded to repeat the claim obsessively for months, telling anyone who’d listen that the health care reform law is “dead.” “Gone.” “Absolutely dead.” “Finished.” A “dead carcass.”

And yet, Trump apparently now believes the exact opposite. Indeed, on “Meet the Press,” he suggested he deserves some kind of credit for “deciding” not to kill the health care law.

Part of the problem with the boast is the obvious contradiction: when a president spends two years telling the world that his country’s reform law is dead, it’s a bit jarring when that same president quietly flips his talking points, expecting everyone to just play along.

The other area of concern, though, is the brazen lying. To hear Trump tell it, he “could have” tried to kill the ACA, but he chose a more responsible course. That’s a tough sell for those of us who know that this White House has gone to extraordinary lengths to sabotage the health care system, only to fail to kill its target.

I’ve heard jokes for years that Trump would eventually present himself as the savior of Obamacare, but I never really believed them. I stand corrected.

This gaslighting of America cannot be allowed to continue by a feckless news media. Donald Trump and the GOP are trying to kill “Obamacare” by any means necessary, and any statement to the contrary is a goddamn lie! The media cannot allow Republicans to say this without calling them out for the lie.