“In the past several weeks, it has become clear to any observer of current events that the president is abusing the office of the presidency for personal political objectives,” they said.

The statement was signed by the co-founders of Checks and Balances, which calls itself a group of “conservative and libertarian lawyers standing up for the rule of law.”

They outlined details from Trump’s July 25 call to Ukrainian President Volodymyr Zelensky in which Trump asked Zelensky for the “favor” of investigating “a baseless theory relating to the 2016 investigation into Russian interference in the U.S. election” as well as looking into allegations that former Vice President Joe Biden stopped a prosecutor from going after a company with ties to his son, Hunter Biden.

In their statement, the lawyers also cited Trump’s declaration to reporters last week that “China should start an investigation into the Bidens.” (See below).

“We believe the acts revealed publicly over the past several weeks are fundamentally incompatible with the president’s oath of office, his duties as commander in chief, and his constitutional obligation ‘to take care that the laws be faithfully executed,'” they wrote. The lawyers said Trump’s acts formed “a legitimate basis for an expeditious impeachment investigation.”

About that Trump request for political “dirt” to China: Michael Pillsbury, an outside adviser to President Donald Trump on China trade policy, is now involved. The Daily Beast reports, Trump Confidant Michael Pillsbury Claims He Brought Up Topic of Hunter Biden to China:

Last week, despite already facing an impeachment inquiry for pressuring the Ukrainian president to investigate a 2020 political rival, Trump publicly called for China to open an investigation into the Bidens. It was later reportedthat the president mentioned Biden in an earlier call with the Chinese president, reportedly promising to stay quiet on the Hong Kong protests as trade talks progressed.

During Pillsbury’s Wednesday appearance on Lou Dobbs Tonight, the Trump confidant said he was in Beijing a week ago and that the Chinese are currently looking at this impeachment issue as “the weakening of President Trump.”

“They think Nancy Pelosi is a factor in the China trade talks,” Pillsbury added. “In a way, the Democrats are giving aid and comfort to the enemy. But that will hold the Chinese back from making the kind of concessions President Trump needs.”

Dobbs, meanwhile, argued that this should show what the “radical Dimms”—Dobbs’ nickname for Democrats—are up to, adding that the “focus should have been on the relationship between the Democratic Party and its collusion with China.” That prompted Pillsbury to casually make a stunning admission.

“I tried to bring up the topic in Beijing,” he said. “Just tell me what happened with Hunter Biden. I have never seen them get so secretive in my life.”

Pillsbury continued: “They would discuss ICBM warheads rather than talk about what Hunter Biden was doing in China with Vice President Biden. That is a big area now where the Chinese know they don’t want any American probe into what happened with Hunter Biden.”

Earlier this week, the Chinese government announced that it had no desire to get involved with a Biden investigation, saying it has “long pursued the principle of non-interference in the internal affairs of other countries.”

Pillsbury later told the Financial Times that he actually received “quite a bit of background on Hunter Biden from the Chinese” during his visit to Beijing last week.

The Trump ally, however, quickly backed away from this claim, denying to C-SPAN that he said this to FT. The reporter on that story, meanwhile, shared the email Pillsbury sent him confirming he received intelligence on Biden’s son from China. 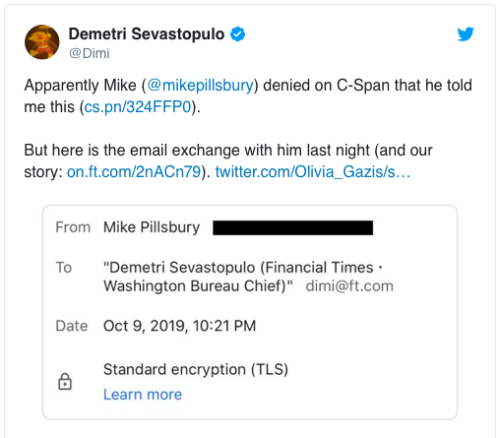 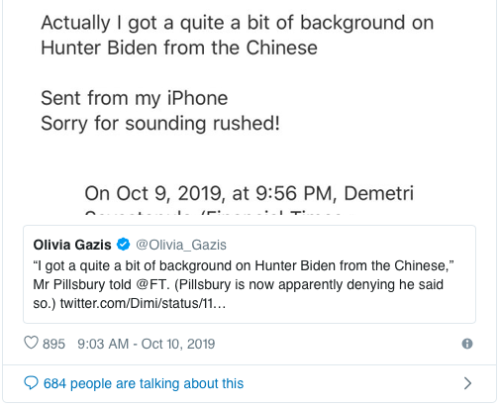 George Conway has been a busy boy today. In a podcast with former U.S. Attorney Preet Bharara on his “Stay Tuned with Preet” podcast, Conway said of the letter from White House Counsel Pat Cipollone to Congress, “This was trash.” George Conway blows up Trump White House’s ‘trash’ letter condemning impeachment in rare interview:

Addressing the letter’s claims that Trump’s due process rights have been circumvented without a vote and that Trump has no choice but to not cooperate, Conway maintained, “they are under no obligation to allow the president to participate.”

But the part I found most interesting was this. ‘My Position is Clear.’ George Conway, Husband of Trump Counselor Kellyanne Conway, Believes White House Staffers Should Quit Their Jobs:

During a newly-released podcast interview, attorney George Conway, the husband of President Trump’s counselor Kellyanne Conway, suggested that Trump’s closest advisers should step down amid the impeachment inquiry.

I’m sorry? When you go to bed at night and the wicked witch of the White House, a truly evil woman, is laying in bed next to you (I assume), do you not have this conversation with her? “Get out! Run! Don’t look back!” Geezus, George, no one is going to take you seriously when you cannot even influence your own wife.

“If you can’t have a positive effect on him and I don’t think anybody can, yeah,” Conway told Bharara. “I think the calculation they should be making is [that] he’s going to be gone at some point and there’s going to be a reckoning and history isn’t going to be kind to people who said nothing or stood up for Trump.”

When Bharara sounded like he was getting to ask specifically about his wife’s role in the administration, Conway quickly shut it down.

“Not going there,” Conway said. “But I think my position is clear.”

Actions speak louder than words, George. When the wicked witch of the White House agrees to tell Congress everything she knows, I might listen to you.