The poll, taken from October 6 to 12, found that only 24 percent of registered voters who support Trump view the pandemic as a “very important” voting issue in the 2020 election, compared to 82 percent of Biden supporters.

MAGA cult members represent a second public health threat. It is because Donald Trump is promoting mass delusion among his MAGA cult followers by downplaying the seriousness of the coronavirus pandemic.

The Trump administration triumphantly declared victory over the coronavirus pandemic on Tuesday, one week before the 2020 election and with COVID-19 cases surging across the country.

The lie came in a news release on a new 62-page report from the White House Office of Science and Technology Policy listing what it claims are the scientific and technological accomplishments during President Donald Trump’s first term. The list includes, “ENDING THE COVID-19 PANDEMIC.”

Among other White House officials, Tuesday’s release includes a quote from “Princess” Ivanka Trump, the president’s daughter and adviser who has zero training or background as a scientific expert.

“Over the past four years, President Trump’s policies and investments in science and technology ensure America stands ready to solve today’s most pressing challenges and that our workforce is prepared for tomorrow’s innovations,” Ivanka Trump said. “For years to come, these achievements will guarantee the United States remains the world’s leader in research, discovery and the advancement of industries that will shape our future.”

Tuesday’s self-congratulatory release underscores that the administration has simultaneously surrendered to the pandemic while trying desperately to steer public attention away from its failure to control the spread. During an appearance on CNN’s “State of the Union” on Sunday, White House chief of staff Mark Meadows declared that the U.S. is “not going to control” the pandemic because it’s “contagious.” 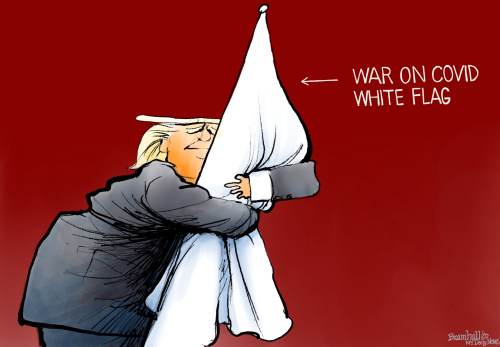 The pandemic is far from over. It is raging from coast to coast, thanks in no small part to the Trump administration’s mishandled response. A recent report from Columbia University estimates that the “abject failures” of government agencies under Trump resulted in between 130,000 and 210,000 avoidable deaths attributable to COVID-19.

From the beginning of the outbreak, Trump has been at war not with COVID-19, but rather COVID-19 science and data. He has repeatedly downplayed the health threat, blamed China and the World Health Organization for the pandemic, attacked the nation’s top infectious disease expert and mocked his election opponent, Democrat Joe Biden, for vowing to listen to scientists as president.

Trump has pushed wild, unfounded conspiracy theories that the media is trying to sow fear ahead of the election and that health officials are exaggerating COVID-19 deaths because “doctors get more money and hospitals get more money.”

“The Fake News is talking about CASES, CASES, CASES,” Trump posted to Twitter on Saturday. “Media is doing everything possible to create fear prior to November 3rd.”

It turns out that Trump’s COVID Task Force Is Livid Over the Trump White House’s ‘We Ended COVID’ Report:

Health officials and scientists working on the Trump administration’s coronavirus response said on Tuesday they are personally offended by the White House’s announcement that it has successfully ended the COVID-19 pandemic—a pandemic that is, in fact, worsening.

“It’s mind-boggling,” one official said of the White House’s assertion it had ended the pandemic. “There’s no world in which anyone can think that [statement] is true. Maybe the president. But I don’t see how even he can believe that. We have more than 70,000 new cases each day.”

Four officials working with the White House coronavirus task force told The Daily Beast that they viewed the White House’s statement as a personal slight and a public rebuke of their efforts to try and get control of the virus.

Officials described the report as the latest example of the president and his team of advisers refusing to acknowledge that the U.S. is experiencing a worrying resurgence of the virus. The document, they added, underscored the extent to which the White House believes there is nothing more than can be done to contain the pandemic.

“We have exploding case counts. Death rates will undoubtedly rise. They are living in a parallel universe that bears no relation to the reality that Americans are living,” said Dr. Tom Frieden, former director of the Centers for Disease Control in the Obama administration. “And this idea that we should let it spread and protect the vulnerable is a really dangerous mistake. The idea that it [containing the virus] can’t be done ignores reality.”

“The White House is operating on a completely different speed than the rest of the health agencies,” one senior administration official said. “They’ve all but given up on the idea that there is more to do in terms of getting a handle on these new cases that are popping up. The rest of us still view the threat of those cases as the top concern.”

Here in the reality-based community that believes in science, medical experts and data supported facts, these are the headlines from just over the past 24 hours:

U.S. reports more than 500,000 cases in a week, a record, as the Trump administration says it ended the pandemic. (New York Times).

Hospitals in nearly every region report a flood of covid-19 patients (Washington Post).

Hospitals Are Reeling Under a 46 Percent Spike in Covid-19 Patients (New York Times).

As the coronavirus surges, it is reaching into the nation’s last untouched areas (Washington Post).

Trump and his MAGA cult can try to deny reality, but reality is going to find them in the end.