The usual suspects from the “Kochtopus,” who have fostered Arizona’s culture of corruption for years, have filed a challenge to the Outlaw Dirty Money initiative to keep it from the ballot, and deny Arizona citizens their right to vote on regulating their corrosive dark money spending in our elections. 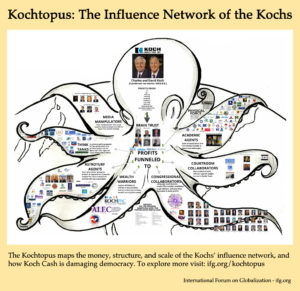 Officials of two organizations known for anonymous [dark money] spending on political campaigns filed suit late Thursday to keep Arizonans from voting on a measure that would make the practice illegal.

The lawsuit charges that some of the paid circulators for the “Outlaw Dirty Money” campaign did not register ahead of time with the Secretary of State’s office as required by law. GOP Attorney Kory Langhofer also said that out-of-state residents who were carrying petitions also failed to register.

Langhofer claimed several other violations of initiative requirements, including that some circulators were convicted felons who had not had their civil rights restored. That, he said, makes them ineligible to gather signatures.

Among the plaintiffs are Scot Mussi, executive director of the Free Enterprise Club, and Andrew Clark, state director of Americans for Prosperity. Both organizations have made repeated expenditures in Arizona elections both to support candidates of their choice and to oppose others.

More to the point, both say their groups do not have to disclose their donors. That is based on their status under the federal tax code as “social welfare organizations” which are permitted to spend up to half their revenues on elections without being considered campaign committees. 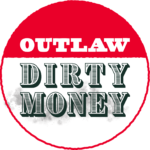 The initiative proposes to put what amounts to “right-to-know” language into the Arizona Constitution. It not only mandates disclosure of any individual, association or corporation that spends at least $2,500 in any two-year election cycle but imposes fines triple to the undisclosed amount.

If approved, it would overrule not only exemptions from reporting on statewide and legislative races approved by the Republican-controlled Legislature but also a more recent measure telling cities that they, too, cannot force disclosure. That would most immediately affect Tempe where voters approved a disclosure requirement earlier this year on a 91-1 margin.

In a prepared statement, campaign adviser Bob Grossfeld lashed out specifically at Americans for Prosperity, calling it “the Lords of dirty money” fueled by the Koch brothers “who have been buying their way through our elections for years now.”

And Grossfeld said he is confident there are enough valid signatures on the petitions to put the issue on the ballot.

Initiative supporters submitted about 285,000 signatures. At least 225,961 of those need to be found valid to give voters the final say.

That is a slim margin of error. We’ll see what happens.