Doug Ducey, the ice cream man hired by Koch Industries to run their Southwest subsidiary formerly known as the State of Arizona, is a practitioner of propaganda over policy. He rolls out a glossy media P.R. campaign and gets his corporate benefactors to pay for advertising praising him for his P.R. campaign. The substance of the actual policy gets lost.

Ducey did this for his #ClassroomsFirst initiative in which he declared himself to be the “education governor,” he did this to sell his unconstitutional Prop. 123 to settle the education inflation adjustment lawsuit against the state so that the state would not have to pay restitution for funds stolen by our GOP-controlled legislature, and he is doing it yet again with his #20by2020 teacher pay proposal. 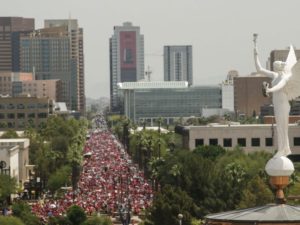 With more than 50,000 educators and their supporters marching on the state capitol this week in a sea of red, our self-described “education governor” (sic) refused to meet with education leaders, Ducey to meet with ‘decision makers,’ not teachers to talk about salaries, and instead negotiated a “deal” with his GOP legislative leaders in a one-sided negotiation that did not include the teachers. Governor announces budget deal with teacher pay raise — but gives no details:

Gov. Doug Ducey late Friday announced he had secured a deal with state lawmakers to approve his proposed pay increase for teachers, but did not provide any details of the plan. What a shock!

The announcement came after lawmakers hit a stalemate Thursday and adjourned for the weekend, even as tens of thousands of teachers marched on the state Capitoldemanding higher pay and increased education funding.

Many protesters said Ducey’s previously proposed pay raises, which total 19 percent over three years, were not enough. That plan relies on rosy projections of increases in state revenue, rather than a dedicated source such as a tax, to fund the increases.

Ducey issued a statement after 3 p.m. along with Senate President Steve Yarbrough and House Speaker J.D. Mesnard, both R-Chandler, saying they reached an agreement.

However, they also said they would be “working through the weekend” and would introduce the plan in the Legislature “early next week and pass it shortly thereafter.”

Even though not all lawmakers have been briefed on the plan and no bill has been introduced, the Governor’s Office said it was confident there was a deal in place.

After closing schools and keeping 850,000 Arizona children at home Thursday and Friday, teachers and education supporters already had decided to continue their strike Monday.

If the governor’s plan is not introduced Monday, it may lead to further walkouts on Tuesday.

The governor’s announcement also came shortly after a ballot initiative was filed by a progressive group that is seeking to increase personal income taxes with voters’ approval this November, with the money going to teachers and schools.

The Invest in Education Act initiative could give voters the opportunity to decide in November whether they want to fund public education with higher income taxes on people who earn more than $250,000.

The initiative designates 60 percent of new funds for teacher salaries and 40 percent for district and charter school operation and maintenance expenses.

It would allow funding to cover full-day kindergarten and pay raises for student-support personnel, backers said. It also would require teacher and personnel input to governing boards on how to spend the funds.

Ballot initiatives require 150,642 signatures by July 5 to qualify for the ballot.

David Lujan, director of the Arizona Center for Economic Progress, said low teacher pay needs to be addressed by voters and that the initiative is the right way to do it.

Lujan said lawmakers have created the problem that’s led to tens of thousands of teachers protesting at the state Capitol and closing schools for two days so far.

“We went on a 30-year tax-cut spree that’s resulted in the crisis we have today,” Lujan said. “Enough is enough.”

“Today, we are pleased to announce that this plan is a reality,” the governor’s joint statement with legislative leaders said. “Arizona is delivering on its commitment to our students and teachers.”

It said the plan restores cuts to increase school funding, and includes money for discretionary spending for either pay increases, curriculum or infrastructure.

And the plan does not raise taxes… the only thing that truly matters to our Koch-bot governor.

Joe Thomas, president of the Arizona Education Association, and Noah Karvelis, a teacher and organizer of Arizona Educators United, issued a joint statement saying they don’t trust the governor’s announcement.

“We have a press release and a tweet from the governor,” they said. “We have no bill. We have no deal. The devil is in the details.”

They continued to show frustration that the governor did not meet with them and lawmakers adjourned for the weekend amid the walkout.

“They ran from red,” they said. “When education advocates came together to fix the problem lawmakers refused to address, suddenly we get an announcement of a plan without any details.”

Mesnard said the deal is essentially based on the funding sources in Ducey’s previous plan, but with less optimistic revenue projections. It also anticipates a smaller reduction in health care spending than the governor’s initial proposal.

Mesnard said those less-rosy numbers helped convince lawmakers of the viability of the plan. He said it should also help convince members of the public. More P.R.!

The reliance on less optimistic view of Arizona’s economy means, mathematically, that additional funds must come from somewhere else. But Mesnard would not detail those Friday afternoon, saying he wanted to speak to his members first.

The plan would provide enough funding for across-the-board 20 percent raises for teachers, Mesnard said. But it would be distributed to the school districts to spend as they see best, he said.

“We provided enough resources for a 20 percent increase in teacher compensation,” Mesnard said. “Then, it’s up to (districts) to do their job and manage the money.”

He said the extra revenue would go to districts under the existing state formula that, outside of transportation costs, gives little direction on how the money is spent. Theoretically, a district could put no money towards teacher salaries, or give raises in varying amounts.

These words should be engraved on the tombstones of the political careers of each and every GOP legislator who promotes and votes for this sham “deal.” Vote them out!

More money was found through a measure, which Ducey signed Wednesday, that raised the vehicle registration fee by about $18 a year, Mesnard said. That measure would bring in $149 million in new monies that was set to be spent on highway-patrol operations.

Imagine what they could do with new tax revenue dedicated to public education.

Mesnard suggested on Friday that some of that money would be swept and instead go to the teacher pay plan.

“That was the biggest fundamental change,” he said.

Ducey spokesman Daniel Scarpinato said House and Senate members needed to be briefed on the details over the weekend.

Asked why the plan wouldn’t be introduced as soon as possible Monday to possibly prevent an additional day of walkouts, Scarpinato said drafting the bills for the plan could take longer.

“I think we would like it early next week,” he said. “Monday would be great. Obviously there is a lot of technical work that needs to be done once you actually come to the agreement.”

Rep. Rebecca Rios, the House Minority Leader, said she had not been briefed on the details of the deal. The only new detail, she said, it that there is now apparently enough legislative support.

“The assumption now is they’ve lined up the votes to back his plan,” said Rios, D-Phoenix. “But there are still no details. There is still no bill draft for us to look at.”

Rios, who was wearing a #RedForEd T-shirt, credited that movement for the proposal being offered so far.

“It’s only because of the walk-out that they’re doing any of this,” she said.

The Republic’s E.J. Montini points out the obvious absurdity of this “deal.” Ducey’s teacher pay deal is NOT a deal:

Gov. Doug Ducey says he has reached a deal to raise teacher pay by 20 percent by the year 2020.

Ducey, Senate President Steve Yarbrough and House Speaker J.D. Mesnard released a statement saying in part, “Earlier this month, we stood shoulder to shoulder, in unity with the education community, to announce a plan for a 20 percent increase in teacher pay by school year 2020. Today, we are pleased to announce that this plan is a reality. Arizona is delivering on its commitment to our students and teachers.”

First, their “plan” must get through the Legislature.

One side talking to itself is NOT a deal

Second, Ducey, Yarbrough and Mesnard are all on the same side. They were not negotiating with teachers, but among themselves.

The other half of this particular negotiation is … you know … the TEACHERS.

A deal is not reached when one side of a negotiation announces that it agrees with itself.

That is what Ducey did.

Plus, Ducey’s announcement did not include specifics.

Teachers, being teachers, want to see the work.

Not just promises but proof

They don’t accept a solution from a student until they are satisfied that the math is correct and the conclusions reached are provable.

Which is why Joe Thomas, President of the Arizona Education Association and Noah Karvelis, music teacher and Arizona Educators United organizer issued a statement in response to the governor’s statement that reads in part, “We have a press release and a tweet from the governor. We have no bill. We have no deal. The devil is in the details.

“We know that we have been down this road before. He makes promises that he can’t keep. We just can’t trust him.”

“But here’s what we know. Over 100,000 people marched on the Capitol over the past two days. We stood in the heat for hours and hours. We marched and we rallied. We honored our students by speaking truth to power.”

Instead of talking they ‘ran from red’

They added, “When the governor and his friends at the Capitol had a chance to meet with us they left town.

“They ran from red…”

The Legislature hastily adjourned at the end of last week to avoid being at the Capitol when tens of thousands of educators and their supporters marched there.

Who wouldn’t be skeptical?

In other words, the same lawmakers who are demanding that teachers return to work fled from their own workplace.

Is it any wonder teachers don’t trust their so-called “deal.”

You have this weekend to contact your state legislators and to let them know that without new tax revenue dedicated to public education for teacher raises and to restore the billions of dollars cut by our GOP-controlled legislature over the past decade, there is no “deal.” And if they vote for this budget gimmick of “robbing Peter to pay Paul” yet again, you will be voting them out of office in November. Enough is enough.