I’m not sure whether Donald Trump is more Baghdad Bob, denying that there were any American tanks in Baghdad when they could be seen only several hundred meters away from the press conference where he was speaking, or George W. Bush staging his flight deck “mission accomplished” PR stunt after the initial invasion of Iraq, before the war turned badly on him in a hurry. Both were propagandists.

We may be only in the top of the second inning in the fight against the coronavirus pandemic, but Donald Trump is already declaring victory and game over. Trump pivots hard away from fight against unvanquished pandemic:

President Donald Trump wants to move on. “Wartime” leadership in a national crisis no longer fits his political timetable.

No matter that coronavirus cases are rising in many states and that governors are ignoring his guidelines about when it’s safe to open. Trump is shrugging off warnings by scientists that the easing restrictions taking place across the country could cause tens of thousands of deaths.

The White House gave its clearest sign yet Tuesday, just less than six months from Election Day and as the US death toll topped 70,000, that it is moving from pandemic management to a message of revival and an aggressive pitch for a second term. And Trump is thwarting oversight efforts of how he and his administration responded to the pandemic that could reveal failures that worsened the outbreak.

Vice President Mike Pence revealed conversations about scaling back the administration’s coronavirus task force perhaps around Memorial Day at the end of the month. Officials said that advisers like Drs. Anthony Fauci and Deborah Birx would remain on board. But closing the task force would make experts whose science-based arguments have sometimes contradicted Trump’s overly optimistic projections far less visible.

Disbanding the task force would also raise questions about the administration’s priorities in effectively declaring victory over a pandemic that appears likely to rage for many more months.

Trump all but admitted that he was reconciled to the deaths that epidemiologists say would result from a premature effort to open the economy.

As part of his “mission accomplished” victory tour, Trump visited Arizona on the very day that our state hit its “highest single-day” COVID-19 death toll. Ah, the death of irony.

Trump visited the Honeywell plant in Phoenix, which has converted some of its production to making N-95 surgical masks. 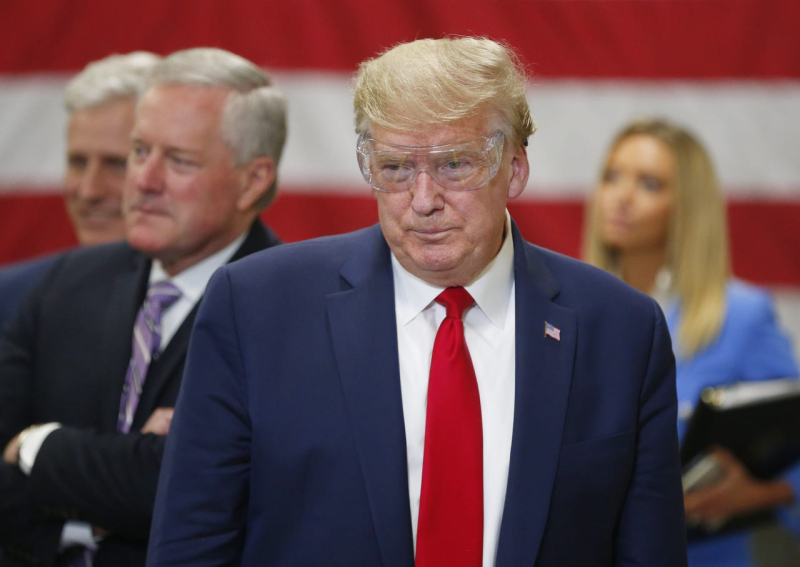 President Trump wore safety glasses, but no face mask, to tour the plant, as did Trump’s White House entourage and Honeywell executives giving him the tour. Yeah, I can’t explain it either.

Arizona’s elected officials and other dignitaries attending the closed event, however, did wear protective face masks, with proper social distancing. The “spread the virus” protestors who were at the capitol on Sunday are going to go nuts over this photo. 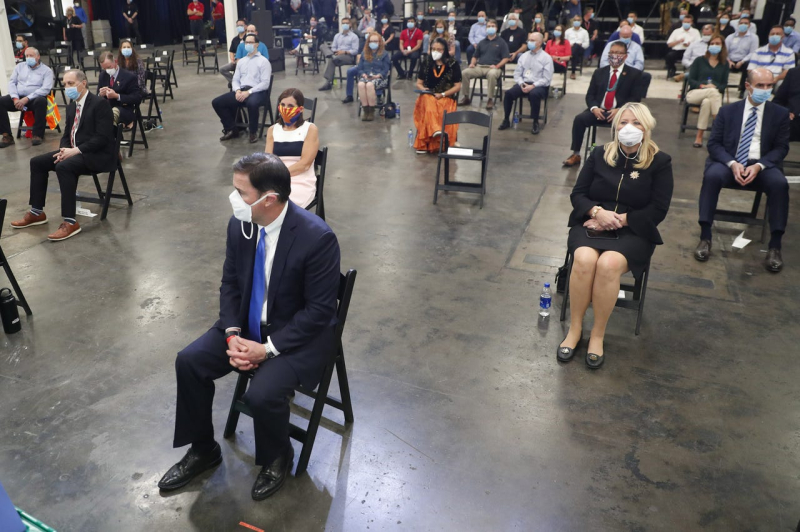 And falling into the category of “you can’t make this shit up,” this actually happened: ‘Live and Let Die’ blasted out as Trump toured a coronavirus mask factory without wearing one himself:

President Trump had an arresting soundtrack on a visit to a coronavirus mask factory, during which the Guns N’ Roses version of “Live and Let Die” played out and the president opted not to wear a mask.

[T]he combination of the president going maskless and the song caught a lot of attention.

The song — a cover version of the song first recorded for the 1973 James Bond film of the same name — played just as a Honeywell representative was showing the president the properties of the materials used in the masks.

The tour also played favorites from Trump rallies, including Lee Greenwood’s “God Bless the U.S.A.” and “Eye of the Tiger” by Survivor, according to the LA Times.

Wait, so it was the Trump campaign who chose “Live and Let Die” as the new theme song for the Trump death cult?

Trump’s explanation is that people die every day from something, so it’s all the same. Trump pivots hard away from fight against unvanquished pandemic:

The President was speaking in Arizona on a symbolic first significant trip out of the White House in weeks, geared to send a strong signal that it’s now time to talk about comebacks.

Trump’s White House is showing signs of moving toward the opening in exactly the same slapdash, politically polarizing manner that it used in the early months of the year, when the President was in denial about the problem.

A botched opening could plunge the country into even deeper economic turmoil and offer the virus a new foothold for deadlier waves of infection later in the year in the absence of a vaccine and so far proven therapies.

The administration effort has been massively criticized. That is despite Trump’s claim that the response has been hugely successful and his victory laps over an entry ban on foreign nationals who had recently been in China and his claim to have averted a feared ventilator shortage.

But signs that it is now downgrading its efforts to combat the virus dismayed the Democratic governor of one of the hardest-hit states, Ned Lamont of Connecticut.

“It seems a little weird that just a couple of days ago the President was at the Lincoln Memorial, doubling the estimates for the number of people who were going to die, given the Covid crisis, then a day later says we may wind down the Pence task force,” Lamont told CNN’s Wolf Blitzer.

“It doesn’t make any sense to me. I think we need more federal direction.”

And New York Gov. Andrew Cuomo accused the White House in a CNN interview on Tuesday of wanting the crisis to be over because it was an “inconvenience.”

“They went to great lengths, initially to minimize it. It then became undeniable. They dealt with it and then left it to the states,” Cuomo told his brother Chris Cuomo, a CNN anchor.

“But they want it over. That is clear. But the virus doesn’t care. The virus doesn’t listen. This is not a marketing situation. You can’t talk your way around this. That virus is there.”

Lamont’s comments reflected that the Trump administration’s pivot, while it may make sense on short-term economic grounds, appears to ignore the brutal reality of the evolution of the pandemic.

Dr. Leana Wen, a former Baltimore city health commissioner, told Blitzer that the thought of winding down the coronavirus task force was “mind-blowing.”

“We are seeing cases of a number of infections going in exactly the wrong direction. They’re increasing, and we don’t have the capabilities we need, the testing, the tracing, all these efforts that require a national coordinated presence,” Wen said.

“We don’t have that in place. And the last thing we want is to give the American people the idea that we have the virus under control, when actually nothing about the virus has changed.”

Trump’s revival rhetoric is being matched by an increasingly aggressive White House effort to cover up for the erratic federal response to the pandemic and the President’s own mistakes early in the crisis, and to thwart oversight pushes by Democrats to expose the administration’s failures.

Trump and his secretary of state, Mike Pompeo, are heaping blame on China for the pandemic, despite the President’s repeated praise for President Xi Jinping in its early days.

They are mounting a bid to convince the world that the virus emerged from a laboratory — not a live-animal market in Wuhan — even if the intelligence may not support their predetermined political narratives.

Echoing his stand during the impeachment saga, the President on Tuesday effectively made a new power grab, making clear he will accept only oversight run by friendly Senate Republicans, flouting Congress’s traditional role.

“The House is a bunch of Trump-haters,” the President said, blasting constitutionally mandated oversight as a “setup.”

There is plenty for Congress to probe. It includes the administration’s failure to set up a comprehensive testing and tracing operation to quell coronavirus hot spots. Trump’s own misinformation, claims that the coronavirus was not a threat and his obsequious treatment of Xi will also interest investigators. And the role of Trump’s son-in-law, Jared Kushner, and his shadowy efforts to run pandemic operations will attract Democratic scrutiny.

CNN reported last month that Rep. Anna Eshoo, the chairwoman of the House’s Health subcommittee, told CNN she plans to call in Bright to testify before her panel as she reviews the circumstances of his removal from a key position after he raised concerns about the safety of a drug that President Trump touted as a potential treatment to the coronavirus.

Bright had led the Biomedical Advanced Research and Development Authority since 2016 when he was reassigned last month to a narrower position at the National Institutes of Health.

He formally filed an extensive whistleblower complaint Tuesday alleging his early warnings about the coronavirus were ignored and that his caution at a treatment favored by Trump led to his removal.

More about whistleblower Dr. Bright in a later post.