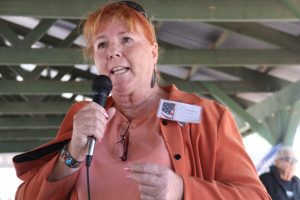 Delina DiSanto will work for the people of Congressional District Four if elected to Congress in 2020.

In its current configuration, Arizona Congressional District Four is a 33,000 square mile area that includes all or parts of seven counties (LaPaz, Mohave, Yavapai, Yuma, Gila, Maricopa, and Pinal). Cave Creek, Prescott, Apache Junction, Yuma, Kingman, and Lake Havasu are some of the towns within its boundaries.

The current House Representative from Arizona Congressional District Four is Republican and Prescott resident Paul Gosar who, despite his fringe embrace of conspiracy theories, membership in the Cult of Trump, and being electorally ostracized by parts of his family, easily won reelection over Democrat David Brill in 2018.

Ms. Di Santo, who barely lost the Democratic primary to Mr. Brill in 2018, is running on her ability to connect with the people of the Fourth Congressional District and advance a forward legislative agenda designed to promote opportunity and social justice.

Ms. Di Santo graciously sat down at the Cartel Coffee Lab in Tempe to discuss her candidacy and positions on the issues.

The questions and responses are below.

“Gosar does not work or represent the people in Arizona. He does not like town halls unless they are staged with supporters. I’ve always wanted to run. Then Trump got elected. I saw how he destroyed Atlantic City and how he destroyed vendors. Out of 102 western districts, we are in the bottom ten percent of median household income. Yuma has 16 percent unemployment. Kingman and AJ (Apache Junction) have higher unemployment (compared to the state and national average). He (Gosar) is not looking for jobs of people. I went around the district and found thousands of people struggling with high housing and drug costs and he is not doing anything about it (After this interview, Paul Gosar did not show up for the vote on the Prescription Drug Bill). I understand what it is like because I grew up poor. I feel for them.”

“1) Auditing the Defense Department where contractors are killing us with regards to contracts on foreign soil with open-ended contracts and the overinflated costs.”

“2) Work with international partners to stop tax havens overseas and put a hold on that. Could be two to three trillion in hidden assets overseas.”

“3) Insuring Global health initiatives like better funding for CDC, NIH, and World Health Organizations with diseases like measles and polio rising again and new strains in health problems like tuberculosis.

“I believe in strengthening the Affordable Care Act. Lower Medicare Age to 50. Create a safety net to protect people from losing everything to high health care costs and illnesses. We need to also have telemedicine and mobile health units that do bus tours for the rural community outreach.”

“State and Local governments should be able to pay at least $15.00 an hour to their employees. Small business minimum wages need to be determined by size, type, income, and the number of full-time employees. It depends on the impact of business. Many small businesses in this rural district cannot afford to pay $15/hr. ”

“We need to Create Renewal Energy Jobs and infrastructure (solar and wind energy, biomass, hydrogen, ocean/river energy). We need to bring these jobs into our state and address the climate change crisis. We need to cut carbon emissions by 50 percent by 2030 and 0 by 2050 (including solar, wind, electric, hydrogen, biofuels, electric grid, nuclear: all the above). We cannot allow uranium mining in the Grand Canyon as it will affect the health and environment for Native Americans and rural communities in those areas. They will bear the greater exposure and burden of disease where they work, live and play. We also need to increase broadband in rural areas. Finally, we need to address the water supply, especially our aquifers. Saudi Arabia and the United Arab Emirates have bought large swaths of land in La Paz county, growing alfalfa, shipping it back to their countries which is causing the availability of water to dwindle. These lower-income communities cannot afford to dig deeper wells.”

“Take the Dirty Money out of politics. We need voter protections in place, independent redistricting, and stop voter suppression. We need election security and technology to ensure that states do not get hacked into.”

“We need to protect Roe vs Wade and woman’s right to choose. We need Congress to pass legislation that prevents the states from limiting women’s reproductive health care. No one wants an abortion but it is hers and the doctor’s decision. We need to repeal the Hyde Amendment.”

“Once he made that phone call, I changed my mind to impeachment because he did it for his own benefit. He has also abused the emoluments clause with his resorts (even in Turkey). He is a national security risk.”

“I want people to realize I am in this race because I believe in the people. I care for them and for their families and I truly care about our state and country. I will work for the people and I will fight tooth and nail for them. Gosar is not creating a positive environment or impact for the district and state and I want to. I really want to help people and our state.

Ms. Di Santo is right that Representative Gosar is not creating a positive environment or impact for Congressional District Four or Arizona.

He is a person that:

Delina Di Santo offers a forward and inclusive vision that profoundly contrasts with the dystopian fringe one professed by Mr. Gosar.

Voters should consider Ms. Di Santo and her positions when voting in November 2020.