There has been a great deal of discussion by mental health professionals over the past year about the mental health of Donald J. Trump. See for example, The Dangerous Case of Donald Trump: 27 Psychiatrists and Mental Health Experts Assess a President. Numerous individuals have called for invoking the 25th Amendment because the president is mentally unfit to govern.

This tweet demonstrates that Trump certainly is delusional: A delusion is an unshakable belief in something untrue. These irrational beliefs defy normal reasoning, and remain firm even when overwhelming proof is presented to dispute them. Delusions are often accompanied by … feelings of paranoia, which act to strengthen confidence in the delusion. 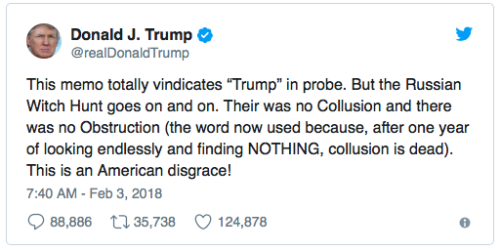 Trump tweets, and the media dutifully reports it as if it is “news” rather than merely the ravings of a delusional man. Trump Says Republican Memo ‘Totally Vindicates’ Him:

The memo, while trying to paint the origins of the Russia investigation as tainted, did nothing to clear Mr. Trump of either collusion or obstruction — the lines of inquiry being pursued by the special counsel, Robert S. Mueller III.

The memo in fact undermined Republicans’ efforts to cast doubt on the roots of the investigation by confirming that the inquiry was already underway when law enforcement officials obtained a warrant from a secret intelligence court to conduct surveillance on Mr. Page.

The Republican document, which Democrats dismissed as containing cherry-picked information and focusing on an obscure figure in the Trump campaign, confirms that a primary factor in the opening of the investigationin July 2016 was initial contacts between a former Trump foreign policy adviser, George Papadopoulos, and Russian intermediaries.

For weeks, allies of President Trump ratcheted up pressure to “release the memo.” The impact, according to supporters, would be monumental: It would shake the F.B.I. “to its core” (Representative Jeff Duncan of South Carolina) or it would reveal abuses “100 times bigger” than what incited the American Revolution (Sebastian Gorka, a former White House official).

The president himself said, after the memo’s release on Friday, that it “vindicates” him in the probe.

But it does no such thing. The memo from House Republicans, led by Representative Devin Nunes, fell well short of the hype. Its main argument is that when the Justice Department sought a warrant to wiretap the former Trump adviser Carter Page, it did not reveal that Christopher Steele — the author of a controversial opposition-research dossier — was funded by the Democratic National Committee and the Hillary Clinton campaign through a law firm.

This is actually a fairly common — and rarely effective — argument made by defendants who seek to suppress evidence obtained by a warrant.

What might be the lasting legacy of the Nunes memo is how President Trump reacted to it. According to reports, Mr. Trump suggested “the memo might give him the justification to fire [the deputy attorney general, Rod Rosenstein] — something about which Trump has privately mused — or make other changes at the Justice Department, which he had complained was not sufficiently loyal to him.”

In fact, Mr. Trump’s approval of the release of the memo and his comments that releasing it could make it easier for him to fire Mr. Rosenstein could help Robert Mueller, the special counsel, prove that Mr. Trump fired James B. Comey, then the F.B.I. director, with a “corrupt” intent — in other words, the intent to wrongfully impede the administration of justice — as the law requires.

After all, Mr. Trump is now aware that he is under investigation for obstruction, and he knows that Mr. Comey said that Mr. Trump wanted “loyalty” from him. Mr. Mueller could argue that the president’s comments that Mr. Rosenstein was not “loyal” and his desire to fire Mr. Rosenstein suggest Mr. Trump’s unlawful intent when he fired Mr. Comey.

The memo also offers the outlines of a broader probable cause case against Mr. Page. The Nunes memo suggests that there was substantial additional evidence, even though it avoids discussing that evidence. The memo indicates that the investigation of Mr. Page began well before the warrant under the Foreign Intelligence Surveillance Act, or FISA, was sought, and that the Russia investigation was initiated because of the statements of George Papadopoulos.

The warrant was issued and then renewed three separate times. Each time, as is standard in seeking a FISA warrant, a judge reviewed extensive information before issuing it. The fact that the warrant was renewed three times indicates that the F.B.I. obtained useful intelligence each time — a judge wouldn’t have approved a renewal if the prior warrant came up empty. That suggests that once the warrants were issued, they revealed important evidence.

In addition, the timeline set forth in the memo indicates that the FISA warrants were submitted by both the Obama and Trump administrations. The initial surveillance began before Mr. Rosenstein was deputy attorney general, and by the time he was at the Justice Department, he approved renewal applications that were based on the intelligence gathered from the earlier surveillance — not the dossier.

On the issue of bias, whenever the Justice Department seeks a warrant, they must present extensive evidence to a judge, who decides whether to issue the warrant based on that evidence. After the fact, defendants can challenge warrants by arguing that the government recklessly excluded information that would have caused the judge not to sign the warrant.

Courts have repeatedly held that even when the government omitted the criminal history of the informant or the fact that the informant was paid, it didn’t matter unless the omitted information would have caused the judge not to sign the warrant.

The Nunes memo claims to show that the warrant was obtained unlawfully, but there is no way of knowing that without examining the extensive evidence submitted in conjunction with the warrant, which the memo does not do. Given that Mr. Steele was a former intelligence officer, not a flipper with an extensive criminal history, it will be hard to show that a judge would have believed he was lying if the source of his funding was included in the application.

Given how little substance there is to the Nunes memo, the Republicans made a misstep by pushing through its release in a partisan manner. The specter of an unreleased memo was more menacing than the thin allegations revealed in the memo itself, which are hotly disputed by congressional Democrats.

Although at least one Republican maintains that the memo shows that Mr. Rosenstein, Mr. Comey and others committed “treason,” the memo itself does not allege that the F.B.I. or Department of Justice knowingly used false information or even that the information they used was false. Because the allegations in the memo are legally irrelevant, I would be surprised if the memo was more than a short-lived publicity stunt.

This is not the result Mr. Nunes expected when his staff wrote the memo, but that could be its lasting impact.

If anything, Rep. Devin Nunes and his committee staff, and any members of his committee who participated in the drafting of this memo in coordination with the Trump White House — potentially the target of the Special Counsel’s Russia investigation — have exposed themselves to being charged as accessories to aiding and abetting a conspiracy to obstruct justice.

Guest Opinion: What We Should Do to Heal from Mr. George Floyd’s Murder and its Aftermath